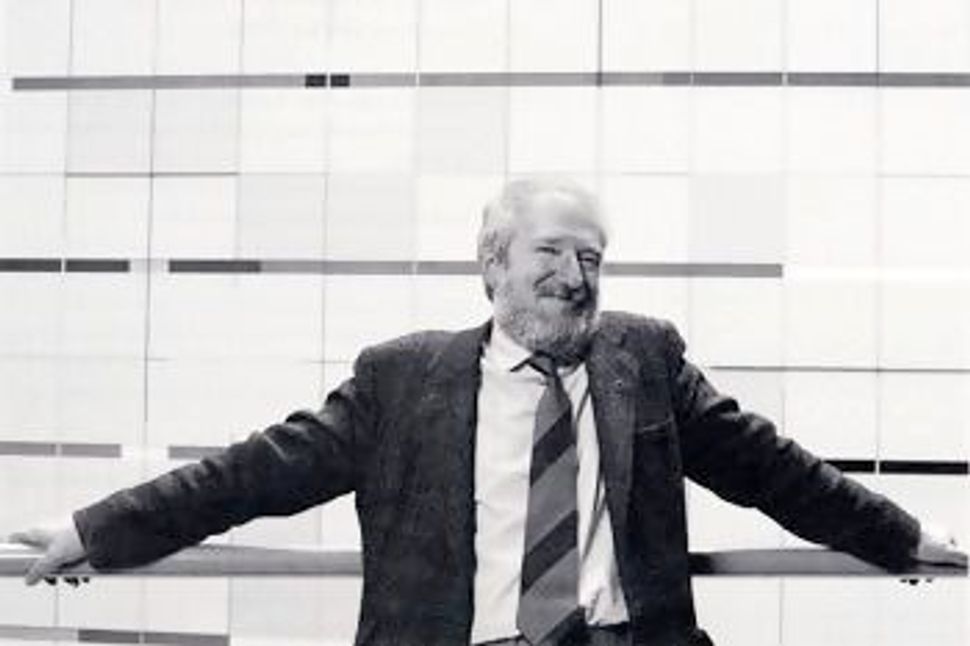 The South African Jewish computer scientist and educator Seymour Papert, who died on July 31 at age 88, was a long-time fixture at the Massachusetts Institute of Technology. He pioneered artificial intelligence and co-invented the Logo programming language.

Yet his work as a social reformer, rather than with machines per se, was a primordial obsession. The human rights activist Janet Levine’s memoir “Inside Apartheid” describes how during her childhood in the early 1950s, the Papert family lived not far from her Johannesburg home. Their son Seymour, a university student, was “‘in trouble’ with the government for his student political activities. ‘It’s always the Jews,’ my mother muttered darkly. My father said that he did not know why someone as talented as Seymour would throw his life away ‘for the Schwartzes’ (a derogatory Yiddish expression for black people).”

As a youngster, Levine worried that Papert might be sent to Robben Island, where Nelson Mandela served 18 of his 27 years in jail. Levine concludes, disagreeing with her father: “Contrary to throwing his life away, Seymour Papert, like so many other activists before and after him, prudently chose the path of self-exile.”

Even before then, Papert had adopted an eleventh commandment to add to the traditional Decalogue, as he claimed in “The Children’s Machine”: “Thou shalt invent three theories every day before breakfast and throw them away before dinner.” 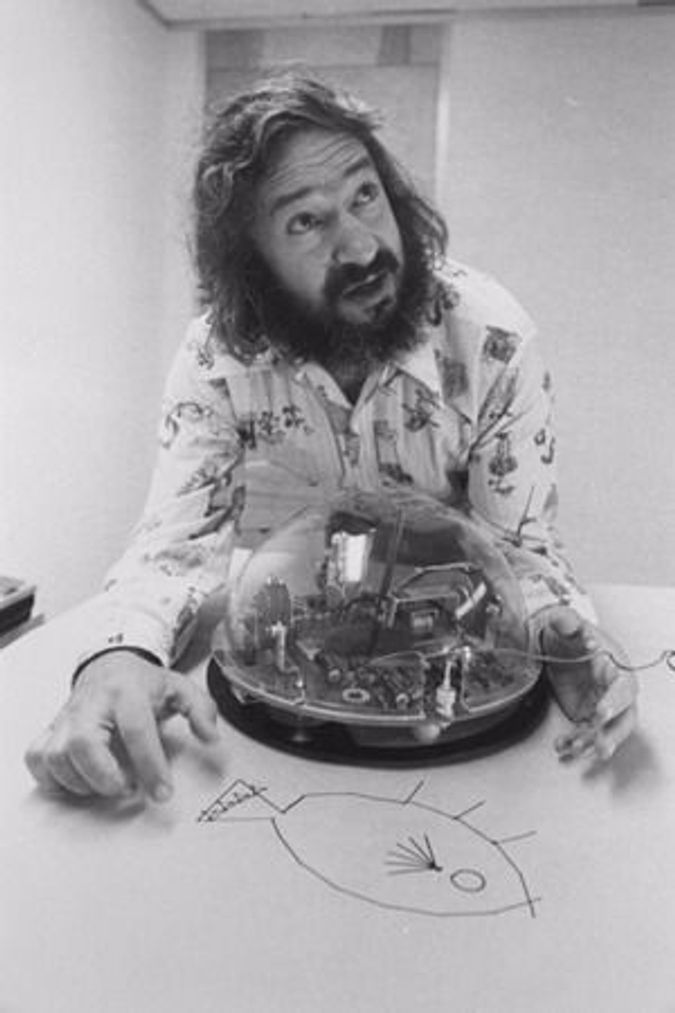 Logo Turtle: Papert with the small mobile robot he invented for children’s play and problem-solving. Image by Cynthia Solomon

This fecund approach to original thinking must have drawn on the example of his father Jack Papert, an entomologist of Lithuanian Jewish origin who studied tsetse flies, enlisting his family on collecting expeditions to hard-to-reach areas of Swaziland. Atypically bringing along the mishpocheh on such trips, Papert’s father made his young son into a “nomad,” according to Bob Johnstone’s “Never Mind the Laptops.” The Papert family, originally lured from their homeland in the late 1800s in search of South African gold and diamonds, eventually focused on scientific research. Even as a toddler, Papert fit this profile, as the foreword to his “Mindstorms” (1980)indicates.

“Before I was two years old I had developed an intense involvement with automobiles. The names of car parts made up a very substantial portion of my vocabulary: I was particularly proud of knowing about the parts of the transmission system, the gearbox, and most especially the differential. It was, of course, many years later before I understood how gears work; but once I did, playing with gears became a favorite pastime,” he wrote.

Another activity that became more than a pastime was improving life conditions for his black neighbors in South Africa. Daniel Crevier’s “A. I.,” a history of machine intelligence, notes that Papert grew up in an otherwise all-black area. Papert acquired further insight and sensitivity into the issue of racism from lengthy discussions with Father Trevor Huddleston, an anti-apartheid Anglican clergyman who often collaborated with Jewish activists sharing his views, notably the artist Hyman Segal of Russian Jewish origin, who illustrated Huddleston’s 1956 anti-apartheid study, “Naught For Your Comfort.”

As Desmond Tutu told an interviewer last year, Huddleston visited him regularly “when I nearly succumbed to tuberculosis. He taught me invaluable lessons about the human family; that it doesn’t matter how we look or where we come from, we are made for each other, for compassion, for support and for love.” This interfaith belief impressed young Papert as well, who like other South Africans of his generation was stunned when Huddleston did simple things like politely greeting black people in the street, acknowledging them as fellow human beings; one such recipient of unexpected civility was Desmond Tutu’s mother. In high school, Papert tried to arrange evening classes for illiterate black domestic servants, an activity strictly forbidden by the apartheid government.

Ever a logical thinker, Papert asked why black Africans were not permitted to attend white schools. The response was because of the threat of infectious disease, to which Papert replied that black servants prepared food and cared for children of the same white families, so the thought process at the basis of apartheid was clearly illogical. Trying to unravel the thinking process of bigots in hopes of repairing what sent their minds askew, for a time Papert looked to Marxism for answers. He even joined the Young Communist League of South Africa, an intermittently active organization banned by the government in 1950. He chummed around with fellow Jewish students such as Sydney Brenner, later a Nobel Prizewinning physiologist, who told an interviewer in 1994 that Papert was a “very good friend and a very important one and also, because of the fringe left-wing politics that we were associated together.” 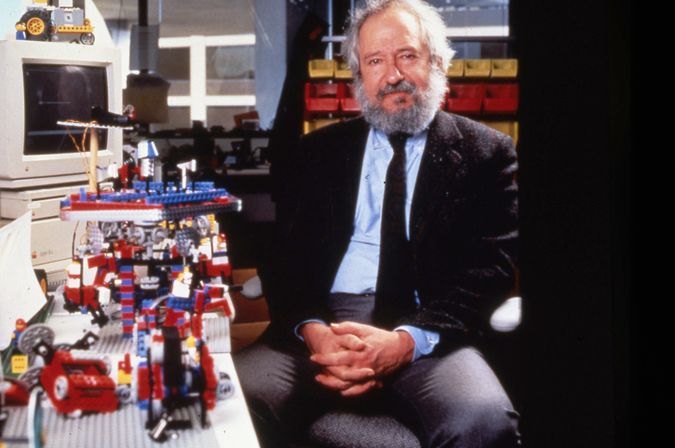 In addition to such fringe activities, Papert became profoundly interested in educational theory. From 1958 to 1963, he worked the University of Geneva with the noted Swiss clinical psychologist Jean Piaget, an authority in child development. As Papert would write in Time Magazine in 1999, “Einstein used the words ‘so simple only a genius could have thought of it’ to describe the theory advanced by pioneering Swiss philosopher and psychologist Jean Piaget that children don’t think like grown-ups… The core of Piaget is his belief that looking carefully at how knowledge develops in children will elucidate the nature of knowledge in general.”

And so, Papert focused on enhancing children’s learning. In the afterword to his “Mindstorms,” Papert indicated that he was led to computers as part of a general theory of intelligence – developed with the artificial intelligence pioneer Marvin Minsky – that “emerged from a strategy of thinking simultaneously about how children do and how computers might think […] seeing ideas from computer science not only as instruments of explanation of how learning and thinking in fact do work, but also as instruments of change that might alter, and possibly improve, the way people learn and think.” Computation, Papert concluded, as inspired by Minsky, “can also be the material from which to fashion a powerful and personal vision of the world.”

Using computers as an omnipresent classroom instrument for expanding and developing young minds, Papert led an innovative quest to improve thinking of people from all racial, social, and economic backgrounds. Regardless of “how we look or where we come from,” there was hope for every child in his view.