No Redemption For Wagner’s ‘Parsifal’ in Bayreuth 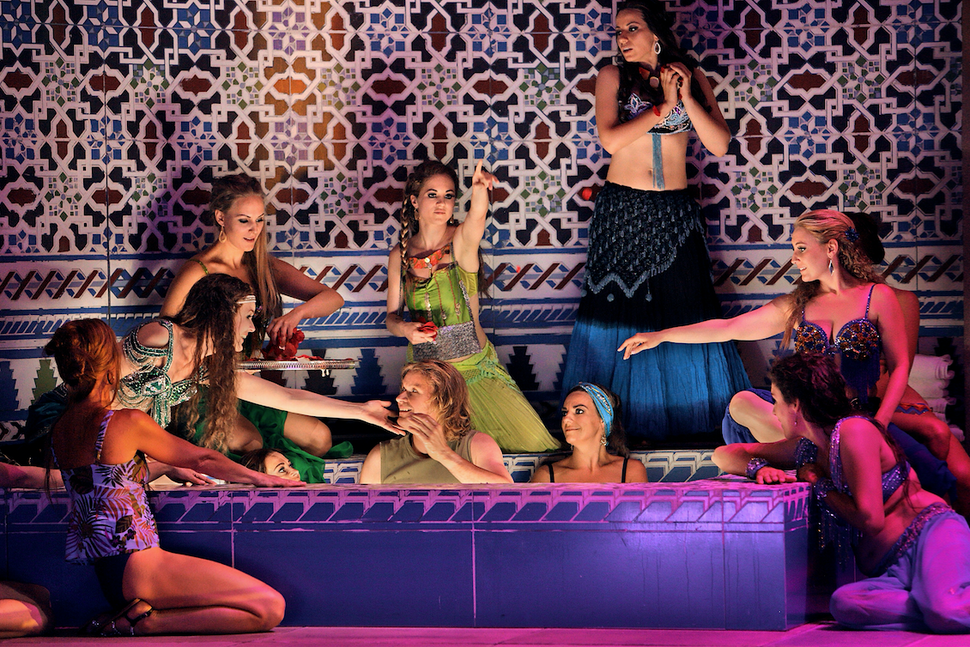 If I needed to choose my favorite incongruous moment from Uwe Eric Laufenberg’s spectacularly bad production of “Parsifal,” which opened this year’s Bayreuth Festival, I would choose the shukling, or davening, Jews in tzitzit and yarmulkes, who appear in the third act chorus.

Titurel, the ancient leader of the Knights of the Grail, has just died, and an angry mob clamors for his son, Amfortas, to once more unveil the sacred Kiddush Cup. The shukling Jews, resembling settlers more than anything else, are huddled together in a bombed-out church somewhere in present-day Iraq, along with practitioners of many other faiths, presumably all under threat from the Islamic State group. Amfortas, who once succumbed to a beautiful Jewish temptress (more about her later) and lost the Holy Spear (oy vey!), refuses to fulfill the sacred duty that only reminds him of his pain and shame. Front and center, a chorister with a tallit draped around his shoulder angrily shakes a gold menorah at the suffering knight. At the end of the production, the candelabra will wind up in Titurel’s coffin along with various other religious paraphernalia deposited by the chorus members after they’ve received the benediction and, presumably, salvation of Parsifal — the title character, who is a holy fool-cum-redeemer.

There is a line of redemption that runs through all 10 of Wagner’s “mature” operas, from the Gothic fairy tale of “Der Fliegende Holländer,” or “The Flying Dutchman,” through the religious apotheosis of “Parsifal,” the composer’s final work. Redemption, perhaps, through art: the art and music of the future, of which Wagner considered himself the beacon. It was this factor that caused Friedrich Nietzsche to break with the composer he had once so devoutly admired. In turning to Christianity for what Wagner considered his most important and profound work, the composer was, according to Nietzsche, reappropriating the master-slave dichotomy that had kept Western civilization crippled for nearly two millennia. With its glorification of purity, suffering and chastity, the philosopher said that “Parsifal” smacked of “hatred against life.” The key difference with Christianity, of course, was that salvation would no longer come through a Jew nailed to the cross, but rather through the genius of Bayreuth, who had spilled his lifeblood on the pages of his profoundly mystical score. Wagner went as far as to call the work a “Bühnenweihfestspiel” (“A Festival Play for the Consecration of the Stage”), and for over 20 years the only way to hear “Parsifal” was to make the pilgrimage to Bayreuth, the ultimate test for the true believer.

“Aus ‘Parsifal’ baue ich mir meine Religion” — “From Parsifal I take my religion” remarked Hitler, Wagner’s most infamous devotee and a doting friend of the Wagner family. The Bayreuth Festival, which the Wagner clan operates to this day, hosted and toasted the Nazis as early as 1926, and through the final wartime festival in 1944. The nexus of nationalism, religious fervor and Gesamtkunstwerk, or universal artwork, was taken up zealously by a Germany seeking to redeem itself in a baptism of fire and blood that would ultimately turn into self-annihilation. This is not in any way to suggest that Wagner should be held accountable for the rise of National Socialism or for the Holocaust. But many in the Nazis’ high command, as well as their social and political forbearers, dipped in the cultural and intellectual stream that Wagner irrigated.

Of Wagner’s deep and repellent anti-Semitism there can be no doubt. The extent to which this attitude found expression in his musical output, however, has long been open to debate. Theodor W. Adorno was the first to suggest that Wagner coded certain characters in his operas as Jewish: the winy, backstabbing dwarf Mime in “Der Ring des Nibelungen”; the pedantic, rule-obsessed mediocrity Beckmesser in Die Meistersinger von Nürnberg. Both parts are characterized by a deliberately exaggerated and snarling song that, it has been argued, may represent the Mauscheln, or linguistic impurity and mumbling, that Wagner considers a key Jewish trait, one that categorically inhibits them from creating anything of worth.

Less speculatively, Kundry, the sole female character in “Parsifal,” is a variation on the trope of the “Wandering Jew,” the figure of the unredeemed drifter fated to roam the earth forever in search of elusive salvation, which also forms the backbone of “Der Fliegende Holländer” (based itself on a novel by the German-Jewish poet Heinrich Heine). Kundry, eternally damned for laughing at Jesus Christ on the cross, is ultimately redeemed by Parsifal, who, having been anointed king, baptizes her and, in doing so grants her permission to die. 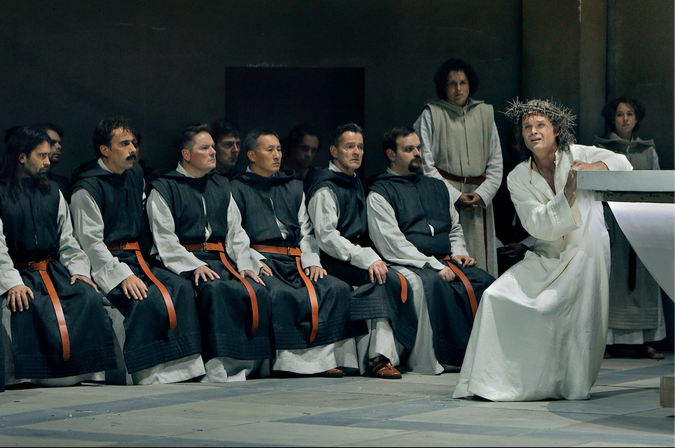 In the new Bayreuth production, Kundry, sung by the caterwauling Russian mezzo-soprano Elena Pankratova, tries (and fails) to seduce Parsifal in an orientalist fantasy that features women in burqas and belly dancers (as well as some others who looked like they stumbled in from the Playboy Swimsuit Issue). Her later baptism, on Good Friday, takes place in an overgrown shed, with gigantic branches and leaves that protrude through the windows like Audrey II from “Little Shop of Horrors.” Kundry, now a silent, servile babushka, sits in a wheelchair, surrounded by a bevy of naked women who dance ecstatically in the rain. In various productions I have seen, Kundry is either killed, forcibly converted by a frenzied mob or, in Dmitri Tcherniakov’s excellent staging currently at the Berlin Staatsoper, united in love with Amfortas (only to be killed by the senior knight Gurnemanz, who cannot abide such mercy). Laufenberg’s refusal to engage critically with Wagner’s problematic source material was one of the major failures of this production, the other one being that it did an abysmal job of merely telling the story.

Laufenberg, who was tapped last year by Bayreuth’s head honcho Katharina Wagner (the composer’s great-granddaughter) to replace the controversial German visual and performance artist Jonathan Meese, updated the setting, the medieval Spain of Wagner’s libretto, to an unidentified war-torn Middle Eastern country in the present day. Monsalvat, the fairy-tale castle of the Knights of the Holy Grail, is a besieged church where refugees huddle on cots for safety. Squadrons of soldiers in full combat gear tear through with raised guns periodically. It is Parsifal’s killing of a swan that brings him into contact with the sacred knights.

In this production, a small boy is also shot (possibly by Parsifal’s arrow as well), a superfluous touch that, like the burqa-clad flower maidens in Act 2, seemed like a feeble attempt to give the production a “torn from the headlines” immediacy. Singing Parsifal was Bayreuth favorite Klaus Florian Vogt, a fine but none-too-exciting choice.

It would have been nice to welcome a newcomer to Bayreuth. How about Andreas Schager, the young Austrian tenor who ignited the Berlin production? With Vogt’s preternaturally soft heldentenor, his every utterance sounded like a lullaby. It was a welcome contrast to all the heavy voices surrounding him, including the magisterial and seeming inexhaustible Georg Zeppenfeld as Gurnemanz, one of Wagner’s longest (and dullest) characters; the anguished Amfortas of Ryan McKinny, and the expressive, if not entirely commanding, Gerd Grochowski as the evil wizard Klingsor, whose hobbies here include praying toward Mecca and self-flagellation. If you ask him nicely, he’ll also show you his stellar collection of crucifixes (including one with an end shaped curiously like a dildo).

Aside from the risible religious potpourri that Laufenberg clearly meant to elucidate the themes of devotion under duress and salvation, the director showed staggeringly bad instincts in blocking. Characters appeared and disappeared with no discernible logic (Parsifal is absent from the stage during the bulk of Kundry’s Act 2 monologue), and the massive, excellently prepared chorus kept filing back and forth nervously during the Act 1 grail scene.

Andris Nelsons, the Boston Symphony Orchestra’s new music director, was scheduled to conduct. Just weeks ago, he dropped out of the production because of reported clashes with the festival’s musical director, Christian Thielemann, who was also responsible for the departure last year of Kirill Petrenko, the Russian Jewish music director designate of the Berlin Philharmonic who conducted the “Ring” cycle to great acclaim here in 2013 and 2014.

Jumping in at the last minute for the Latvian maestro, Hartmut Haenchen, a distinguished East German conductor (I can’t help pointing out that his name literally means “brave mind chicken”), lead a refreshingly brisk performance characterized by honesty and dramatic drive. He seemed loath to wallow indulgently in the score’s cosmic ecstasies. Speaking of cosmic, the best five minutes of this “Parsifal” was the impressive high-definition video projection (by Gérard Naziri) during the Act 1 transformation music of an intergalactic journey through hyperspace and back, of which Stanley Kubrick certainly would have approved.

In the end, it is Wagner’s hypotonic and sublime music that keeps “Parsifal” fresh and valid, despite its troubling themes and checkered past. Productions like Stefan Herheim’s staging here in 2008, which examined the piece in the context of Bayreuth and Germany’s modern history, was an exemplary lesson in how to respond to Wagner and his festival’s fraught heritage. On virtually every level, the 2016 “Parsifal” feels like a missed opportunity. A new “Parsifal” might not roll around here for another decade. Until then, don’t expect any redemption at Bayreuth.

A.J. Goldmann writes about European arts and culture. He is a longtime contributor to The Forward.

No Redemption For Wagner’s ‘Parsifal’ in Bayreuth