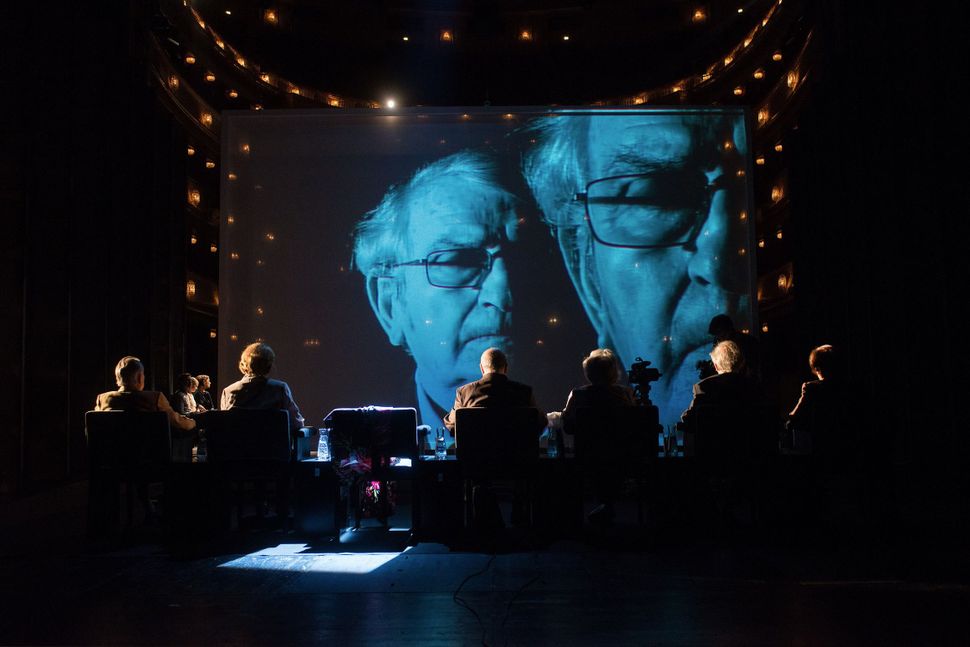 Ari Rath met me at the door of his friend Saleh Turujman’s apartment. It was a brilliantly sunny Friday morning in Washington, D.C., but the men were tucked up inside this eighth-floor space with views overlooking the Jefferson Memorial. Images and artifacts of Jerusalem were on every flat surface, every wall, every shelf. Rath is 91, but has the comportment of a man at least a decade younger. Though it is his third language, his English is nearly flawless, as he learned it when he was a Kibbutz movement representative in late 1940s America. He later became the editor-in-chief of The Jerusalem Post. Rath’s mother tongue was forcibly forgotten, suppressed, for many years. He refused to speak it after he and his brother Maxi fled Vienna in 1938, bound for Palestine with 48 other children, headed away from his father and stepmother and baby half-sister, and from streets full of swastikas and terror. He would not see his parents again until that sister was nearly 9. In recent years his German has returned, in full force, and he has, once again, found himself comfortable in Vienna.

It is the earliest years of his story that Rath had come to Washington for, though his remarkable life has been the subject of other documentaries, and awards. (Turujman, a Palestinian, and Rath have been friends for decades. Rath once interceded on Turujman’s behalf to allow him into Israel when he was stopped at the border. Turujman’s family members trace their Jerusalem roots back 500 years. Rath has long been an outspoken advocate of two states and of co-existence.)

Rath was there as a representative of “Last Witnesses — Die Letzten Zeugen” — a spoken word theater piece presented as a play constructed out of the testimony of survivors. Young actors read the testimony — images of the brutality projected behind them on a screen. The survivors themselves are there with them, onstage, behind a scrim. It is entirely in German. “Last Witnesses” captivated Viennese audiences for over 20 performances; it was supposed to run for five. Afterward it went on — to Hamburg, Salzburg, Berlin, Dresden and beyond — filling theater after theater. It was filmed and partly translated. Rath came to America with the translation. The evening before we met, Rath held the stage at the Austrian Embassy for a question-and-answer session that was meant to last 30 minutes but went on three times as long. “Last Witnesses” strikes a nerve, however late that nerve has been reached.

Austrians long called themselves Hitler’s “first victims.” It was a careful decision in the postwar period — an allied supported disentangling of the greater German identity, a separation of the two nations, as well as a means of separation from the horror. But in so doing, the Jews who were the true victims of annexation, of the Anschluss, and later the deportations, the murders, found their experiences diminished. The undoing of that “first victim” narrative came very late, far later than it did in Berlin. In Austria it was not as much the generation of ’68 that began the questioning but the generation of Kurt Waldheim, the 1980s-era Austrian President whose campaign cracked open the past and rewrote the present. Waldheim maintained that his Wehrmacht experience in wartime had been merely “duty,” not ideology. He was a man with a past, whose claim to have been following orders woke up a segment of Austria that has continued a process of self-examination, one that has kicked into particularly high gear in the past decade.

“Austria was not ready to do this before,” Doron Rabinovici, the play’s author, told me, by Skype, of his play. He curated the narratives, wrote the play. Rabinovici is a major figure in the Austrian Jewish community, a member of that Waldheim generation that woke up the country. He is also the author of the 2011 book “Eichmann’s Jews,” which is how I originally met him, in 2012. We met in Vienna that September, to speak of life in the Imperial City during the war for my book, “Paper Love.” I was trying to understand my family’s ancestral city, the town my grandfather returned to again and again after the war. Rabinovici’s family moved back to Vienna from Israel in the early 1960s, a move, he told me when we first met, that was like moving from Technicolor into black and white. 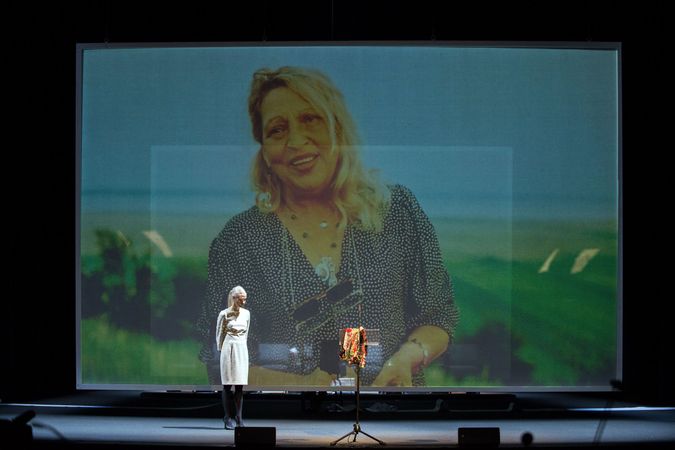 “In 20 years we will not have the survivors with us,” he continued. “This is the moment. And in this moment it was important to show and to symbolize how the memory is transferred from one generation to another. It is like the moment you have when you have the running in the Olympic stadium and one gives the other the baton.” The lights come up on a stark stage, with young actors on chairs, a screen behind them. Beyond them are the survivors, also seated. Each actor rises in turn, telling slices of a story. The dissolution of life. The disintegration of family. “Piss off, you Jewish scum,” one reads, recounting the taunts in the street. “Jew Jew spit in your hat, and tell your mother it is good.”

The words are those of Lucia Heilman, Vilma Neuwirth, Suzanne-Lucienne Rabinovici, Marko Feingold, Rudolf Gelbard and Ari Rath. None of them are young. Marko Feingold is now 103; he is the head of the Jewish community of Salzburg. Most remained in Austria, living witnesses walking in the general population.

“One day a couple came to view our apartment and because they liked it we were given a fortnight” to evacuate it, says the actor reading the words of Lucia Heilman, who was 8 when Hitler invaded Austria. We see her now, seated, her expression inscrutable, onstage. Her chemist mother was fired, but first she had to train her successor. She was forced with her family into an apartment with 20 others on Berggasse. And then there were years and years of terror, in hiding, moving from place to place, never certain tomorrow would come. Filmed at Vienna’s famed Burgtheater in 2013, “Last Witnesses” came to New York and Washington in truncated form, a 30- minute slice of a 175-minute theater event.

The play was born of an idea of the former Burgtheater director Matthias Hartmann, Rabinovici explained. Hartmann is well known in the German-speaking theater world. He wanted to have survivors onstage. “I told him that I have certain preconditions,” Rabinovici said, “because I did not want to make the survivors be ‘extras’ — or background to their own past.”

In the theater the audience had the chance to meet and speak with the survivors. This, Rabinovici says, was essential because in Vienna there were many young people who had never spoken to a survivor. “The second most important thing for me was that one of the people onstage should be not [only] Jewish but [also] from the Roma people,” he said. The Roma woman’s story is there — but the actual survivor died before the theater event took place. In her stead there is an empty chair, draped with her scarf.

The survivors whose stories are told “symbolized the many persecuted, the few that survived, the even fewer that are ready to talk and the even fewer that can go on the stage because this is really difficult.” The first survivor he approached was his own mother, Shoshana Rabinovici. She was, he said, “the touchstone of this project.”

“We were laughing that they planned three performances. Who will see it three times?” Rath told me on that sunny Washington morning. “Meanwhile, it was done 28 times.” From Germany it has gone to Argentina, and to Israel, with Spanish and Hebrew translations. “It’s amazing how even this very short version affects people,” Rath told me.

But we missed something, here, and not only the length or breadth of the event: At the end of the theater productions, Rath said, “I am always the last one to speak. Because I articulate and I don’t mince my words. And I say one should not forget the worst Nazis were Austrians. To begin with, Hitler and Eichmann and many others.”

Ari Rath’s father was imprisoned, early, in Dachau and Buchenwald. His stepmother, Rita, was able to win his release with the promise to turn over all the property she and her husband owned: He had one of the largest paper wholesale firms. “I remember he would order by phone, paper by railway cars,” Rath told me. “This was all taken away by the Nazis.” His stepmother then set about organizing the escape of every one of her charges. Ari and his brother would flee to Palestine, chosen among a lucky 50 for a visa and transport; their stepsister and his father and stepmother arrived in Cuba and then America. Ari’s mother had taken her own life when he was 4. Rath continued, “It took the Austrians 41 years after the war, only in the wake of the so-called Waldheim Affair, that they began to confront their own Nazi past.” The country is now in a new phase of reckining.

“Time and again we have a standing ovation,” he said. The audience had “been sitting there two hours and a quarter, without intermission.” But no one left. When the program was over, the audience and survivors split into three groups. “Two of us, with a moderator, hold a talk, and each of these groups are 300–400 people again. Many youngsters, others — it is amazing they come up to us and say, ‘Thank you for doing this’ — and sometimes I turn the table and I ask them: ‘Why did you come? Why are you here?’” he said. “And this young woman would say, ‘Well, my father was a Nazi, my grandfather was a Nazi, a confirmed Nazi, and my family never wanted to talk about this and it is very important for me.’ This repeats itself time and again, and it is amazing the affect this has.” He adds, “It is the third generation that again begins to ask questions. They want to know how was it possible. How could these heinous crimes take place?”

“Everyone has a story,” Doron Rabinovici said. “Like Lucia Heilman. She was hidden by a friend of the family — she and her mother. They were hidden in a box in his workshop. Until today, she says if someone knocks at the door she shivers. She is afraid who is at the door.”

Sarah Wildman is the author of “Paper Love: Searching for the Girl My Grandfather Left Behind.” She is a contributing editor at the Forward.