How To Read The Talmud With Strings Attached 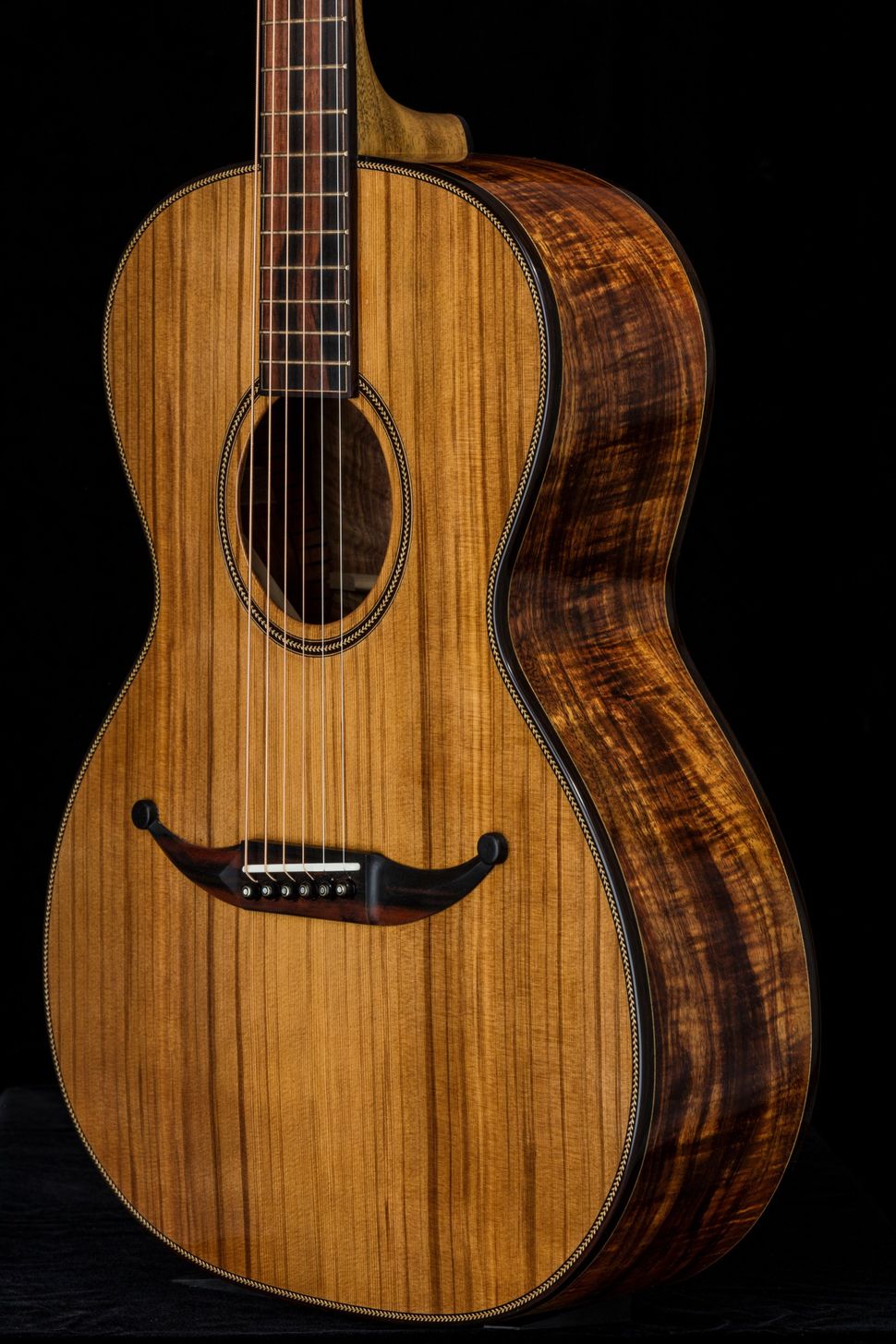 How many guitars do you have?” a friend asked me recently, knowing that a new one was about to arrive.

“Oh, we don’t count them,” I told her jokingly as my wife, Barbara, raised her hands and flashed her palms with all her fingers up. “All I can say,” I said, “is that if they were people and not guitars, they’d be able to pray together.”

That’s a lot of guitars, I suppose. But I’ve been playing since I was 9 years old. My first lessons were with a lanky, hippie iconoclast named Spider Johnson at Harrod Music in my hometown of Lubbock, Texas, and since then, somehow, guitars, heightened consciousness and personal freedom have all been mixed together for me. Stirred by their elegance and their beauty, I began commissioning handmade guitars from talented luthiers around 2009.

My tastes are, if not eccentric, let’s say eclectic. I love unusual-looking instruments with bold, highly figured wood. Hawaiian Koa, Western Sinker Cedar, Cypress Myrtle: Even the names of the woods are evocative to me. I’ve made a habit, too, of naming my guitars and of having them built in memory of family members or friends, especially those who had no children. The relationship between a guitar and a player can be quite intimate, and the idea that these beautiful instruments might survive hundreds of years, passing through the hands of many players, with the names of my loved ones on the label inside, seemed a sweet way of keeping their memory alive.

Recently I ordered two guitars from two different guitar makers, and because I’ve been doing a lot of work lately on the tales of the Talmud — my book on the subject, “Six Memos From the Last Millennium: A Novelist Reads the Talmud,” came out in May — I decided, cheeky though it may seem, to name the guitars the “Yerushalmi” and the “Bavli,” after the two versions of the Talmud.

(The Bavli is the Babylonian Talmud, compiled by scholars living in Babylon, and the Yerushalmi is the so-called Jerusalem Talmud. Since, however, the latter was produced not in Jerusalem but in the rabbinic academies of the ancient Galilee, it was known for years as the Palestinian Talmud. Now, of course, for reasons having nothing to do with rabbinic scholarship, no one calls it that. Instead, it’s the Yerushalmi or the Talmud of the Land of Israel.)

Playing hooky, I’ve discovered, is as essential to literary productivity, as rigor and discipline are, and I relished the idea of being able to say, “I’ll be in my study spending an hour or two with the Bavli.” Also, I like the idea that music is another commentary on the Torah. And the Yerushalmi and the Bavli are not the only Talmudic-themed guitars I own.

The luthier Erich Solomon built me a beautiful, stately archtop that, because of the curly russet-colored “tresses” in the quilted mahogany on the guitar’s back and sides, and the ruddy complexion of its creamy spruce top, I named “Rabbi Yohanan’s Sister.”

Rabbi Yohanan, a third-century sage known for his beauty, says of his sister that she is “even more beautiful than I.” Like her brother, she had coppery skin and luscious red hair, and though she appears in the talmudic literature for only a few short scenes and is never identified by her own name, Rabbi Yohanan’s Sister is, in my reading, one of the heroines of the Talmud, someone we should all know about, someone whose renown should extend further than just to my guitar, although with the guitar and “Six Memos,” I’m doing what I can. 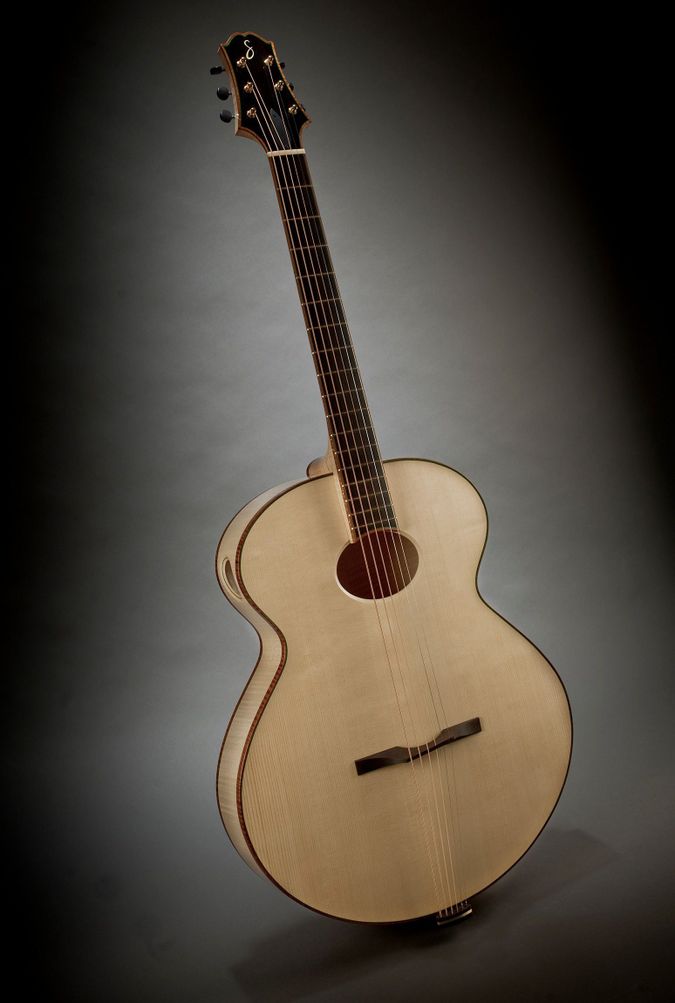 The Yerushalmi, on the other hand, is an entirely different instrument. An elegant nylon-string gypsy jazz guitar built in Vancouver by Shelley D. Park, its top is a blushing cedar, and its back and sides a gorgeous black-hearted sassafras. The name “black-hearted sassafras” is, I think, as beautiful as the wood itself, which looks — it’s hard to describe — like fire surrounding an ancient petroglyph.

Since I’ve run out of deceased relatives, I’ve begun having the guitars built in honor of living people, and the Yerushalmi was built in honor of my brother, the actor Steven Skybell (whom you can see on Broadway through September playing Lazar Wolf in “Fiddler on the Roof.”) I’ve been playing Bach preludes on the Yerushalmi, and also those elegant, quirky little pieces by Erik Satie.

I had worked with Bevan Frost of Big Hollow Guitars. The Bavli is the second guitar he’s made for me. Frost’s a skilled and meticulous craftsman, and when I asked him if he thought he could ever include “For Sarah Avi bas Tzilah Ruchel v’Ayyzik Aryeh HaKohen” in Hebrew on the Bavli’s label, I knew that if anybody could do it, he could.

Frost, I should say, is not Jewish, nor does he know Hebrew. He grew up in rural Wyoming and is currently living in Frisco, Colorado. Still, I sent him my sister’s long name in two versions, one resembling the font of a prayer book, the other more like contemporary Hebrew. In return, he quickly emailed me photos of his practice sheets: a ruler, lined paper, ink bottles, an eraser, a pen and pencils surrounding what looked like a day school kid’s homework. When he felt he’d progressed enough, he sent me a photo of a rough draft. I ran it by two of my friends in Israel, the writer/translator Haim Watzman and Michael Kramer, a professor at Bar-Ilan University. They both suggested a few small changes, and Frost quickly integrated these into the inscription.

Recently, Frost showed up at my house outside Santa Fe, New Mexico, with the Bavli, an exquisite steel-string guitar, in hand. Like its fraternal twin, the Yerushalmi, it has an amber-colored top of western cedar, but its back and sides are constructed of a chatoyant eye-popping Hawaiian koa. Frost’s work is a kind of reinvigoration of 19th-century forms, and the Bavli has a handsome mustache-shaped bridge and an elegant, slender headstock that, coincidentally, resemble thoseon the guitar James Joyce is playing in the famous photograph by Otto Weiss, a reproduction of which hangs over the sideboard in my dining room.

And if you peer inside the Bavli’s sound hole, above the label, on a separate sheet of paper, is the dedication to my sister, written in a fine black fiery script, as lively and as elegant, to my eye at least, as any Hebrew scribe’s.

Joseph Skibell, a novelist, is the author of two recent books of nonfiction, “My Father’s Guitar and Other Imaginary Things” Algonquin Books, (2015) a collection of true stories, and “Six Memos From the Last Millennium: A Novelist Reads the Talmud” (University of Texas Press).

How To Read The Talmud With Strings Attached