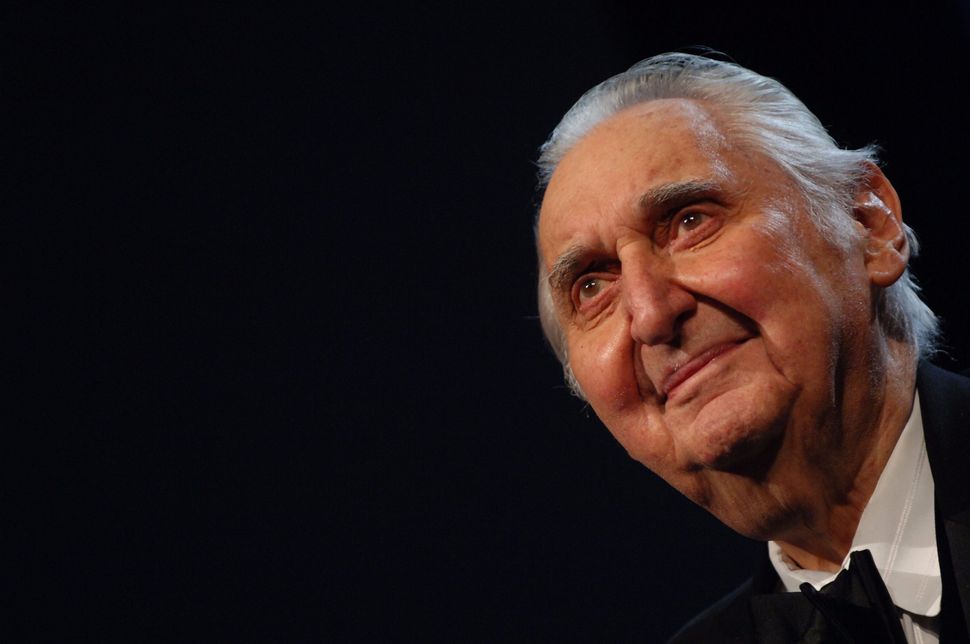 The Forward played an integral role in the start of the long and glorious performing career of the multitalented Fyvush Finkel, who died on August 14 at age 93. He was born Philip Finkel in the Brownsville section of Brooklyn to a mother from Minsk and a father from Warsaw. Around 1931, when Philip was nine years old, his parents answered an advertisement in the Yiddish Forverts placed by the Hopkinson Theatre, a Yiddish establishment located just blocks away from the family home. The Hopkinson, at Pitkin Avenue and Hopkinson (now Thomas Boyland Street) wanted to hire a boy who could sing the wedding song “Oh Promise Me.” Finkel was cast in the role and a career of over 80 years was launched. He watched and learned from such Yiddish theatre luminaries as Ludwig Satz (1891–1944) and Maurice Schwartz (1889–1960), many of whom were noted for their wide-ranging abilities onstage, from musical comedy to the darkest tragedy, sometimes within the same show.

Finkel would achieve this kind of variety, although his radiant gifts as a tummler and gagmeister provided constant employment throughout a much-traveled career in resort hotels in the Catskills, Miami Beach, and other fondly remembered pleasure spots. In interviews, Finkel would sometimes switch on a Henny Youngman persona and pepper journalists with hoary one-liners, along the lines of: “Jews don’t drink. It interferes with their suffering.” Or in the documentary “Komediant” (2000), sharing the tale of a supposed stage production of Anne Frank’s story so wretched that the audience yelled to actors playing Nazis, “She’s upstairs in the attic!” This familiar jape was enough to inspire serious reflections in “Anne Frank Unbound” and elsewhere. Yet despite his effervescent talent for bringing a smile to the face of even recalcitrant audiences, Finkel was always more than a jokester. The Polish-born Yiddish star Pesach Burstein’s memoir “What a Life!” recounts how he hired the 18-year-old Finkel not just as a singing comedian but also to perform in “Who is Guilty”?, focusing on “bigamy stemming from amnesia” in an American Jewish family with sons serving in the military during World War II.

As a nonagenarian, Finkel could recount in precise detail every slight he experienced in casting processes, as well as joy in earning a regular income to support his family. The latter motivation led to a dozen years playing different roles, including the star part of Tevye, in touring productions of “Fiddler on the Roof.” In 1965, Finkel had been introduced to “Fiddler’s” producers by the Russian-born Yiddish actor and radio performer Zvee Scooler (1899-1985). Twelve years of touring in a single play requires intense gritty fortitude like Joseph Jefferson in “Rip Van Winkle” and James O’Neill in “The Count of Monte Cristo,” barnstorming actors of yore. Despite the delights of constant employment – a perpetual anxiety for actors – the performer is imprisoned in a role because that is what public wants. No matter how high the quality of the material involved, it is a test of any actor’s patience, imagination, and sanity. Finkel’s Beckett-like incarceration as Tevye, he told “The Hollywood Reporter” in 2013, was complicated by anti-Semitic incidents. These included when non-Jewish members of the chorus of “Fiddler” complained that Jewish actors were getting all the good roles and higher pay (!) There were also local populations – Finkel singled out Texas decades ago – unaccustomed to, and potentially hostile about, small groups of bearded, Jewish-looking showbiz types loitering in their cities before “Fiddler” was scheduled to be performed.

This grind and the aging process likely added gravity to Finkel’s performances. There was weighty reality in his performance as a quintessentially bitter deli waiter in a 1988 revival of Hy Kraft’s “Cafe Crown,” an anecdotal look at Second Avenue Yiddish theatre starring Eli Wallach.

With more originality in his seriousness than his buffoonery, as a septuagenarian Finkel broke out into TV roles for general audiences. He won acclaim as the Wisconsin lawyer Douglas Wambaugh – not originally written as a Jewish character – in the 1990s TV drama “Picket Fences” and as history teacher Harvey Lipschultz in “Boston Public” from 2000 to 2004. In the latter role, while ostensibly a loony caricature seething with inadequately suppressed erotic fantasms, Finkel delivered zany, sex-obsessed lines with such conviction that he made Lipschultz seem like a case needing psychiatric treatment. This intensity stood him in good stead in films such as Oliver Stone’s “Nixon” (1995), as the Nixon crony Murray Chotiner. Even when succeeding in mainstream projects, Finkel never lost interest in intellectual stage fare such as David Ives’ “New Jerusalem” (2008), a play inspired by Baruch Spinoza’s “Ethics.” In it, Finkel portrayed Gaspar Rodrigues Ben Israel, a member of the temple congregation who passes judgment on Spinoza. Of these roles with gravitas, none was more impressive than the prologue in Yiddish of Joel and Ethan Coen’s “A Serious Man” (2009). As the mysterious Reb Groshkover, who may or may not be a dybbuk, Finkel was utterly convincing and real, the hallmark of powerful acting. He was no less serious when he told “The Daily News” in July about his contempt for Donald Trump: “We have as we say an agricultural agreement with Trump, Ikh hob dir in drerd which means he can go to hell.” Finkel was a long-time Clinton ally; in 1998 he even went on Bill Maher’s “Politically Incorrect” to defend what he called the then-President’s “quickie” during the Monica Lewinsky scandal. Missing a chance to vote for Hillary Clinton this fall will be a quasi-unprecedented occasion of Finkel reneging on an engagement.