NYC Fringe Play Tells Stories of Biblical Women — But Where Are the Jews? 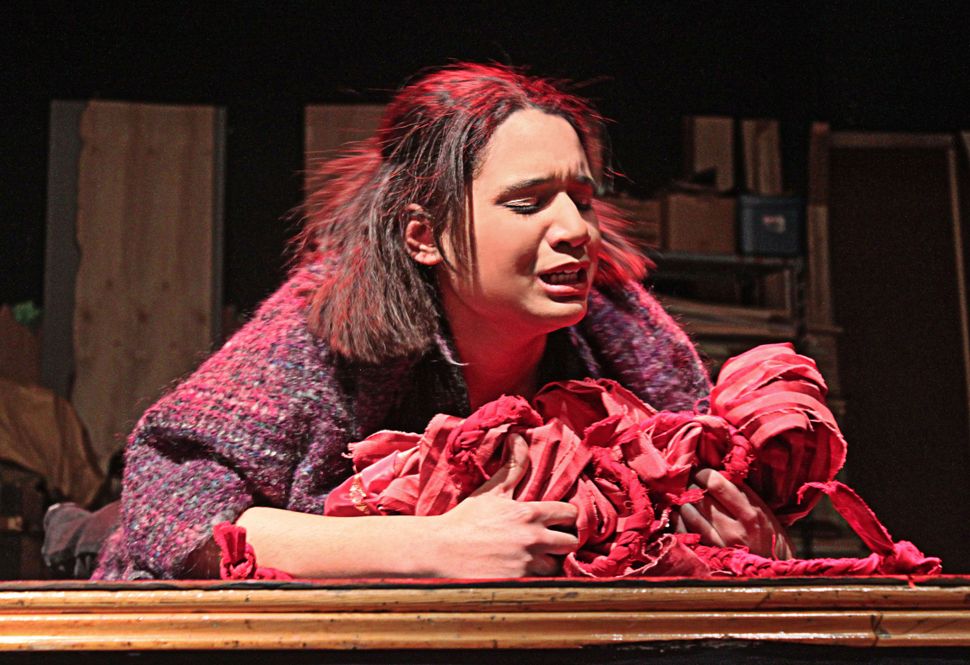 “The Bible Women’s Project,” playing in Manhattan through August 24th as part of NYC Fringe, is a brave piece of theater. Coming from Eastern Nazarene College, a non-denominational Christian liberal arts college outside of Boston, the production grew out of a simple but daunting task: have a group of women read all the stories of women in the Bible, meet to discuss them, and create a performance that gives those Biblical women their due share of respect, compassion, and interrogation.

The ensemble-produced show cycles easily through moods and messages. The women tell the stories of the Biblical women through a number of forms, including music, a talk TV show set up, a beauty pageant, and an imagined diary. They also speak about their own journeys, and the ways in which they feel their faith has alternately supported them and failed them. Prominent is the theme that they have been taught to view controversial women like Eve, Jezebel, and Delilah as weak, one-dimensional, and morally derelict character, rather than as multifaceted people struggling to exist well in a society that limited their opportunities.

I loved the honesty and depth of those explorations, but as a Jewish woman I found myself feeling a bit uncomfortable, even small. I couldn’t help wondering when the cast would touch on the Jewishness of the women whose stories they told; after all, the majority of the women in the Old Testament were Israelites. I quieted that response until partway through the first act, when the cast told the story of Hannah and Peninnah. (Hannah and Penninah are married to the same man, Elkhanah; Hannah is childless, Peninnah a mother. Peninnah mocks Hannah for her childlessness, driving Hannah to pray for children. Her prayer is rewarded, and as she bears children, Peninnah’s die, until she begs Hannah for forgiveness.) The scene opened with the woman playing Hannah on her knees, hands joined in the Christian posture of prayer.

“Our Father who art in Heaven,” she began.

The words resonated within me, painful and wrong. Hannah and Peninnah were both Jewish women. I understood the production was working from a Christian perspective, and within that framework it made sense to portray Hannah praying to a Christian god in a Christian way. I recognize that the Jewish figures of the Old Testament have an enormous significance in the Christian tradition. But Hannah and Peninnah’s role in the Christian Bible cannot erase the fact that their religious significance is rooted in Judaism, that if they did live, they lived as Jews. I felt that by in putting those words in Hannah’s mouth – “Our Father who art in Heaven,” not “Baruch attah Adonai” – they wrenched the Jewishness right out of her history.

The production devotes careful, earnest, vulnerable attention to the Bible’s complex morality when it comes to slaves, people of color, and women. That’s admirable. It’s courageous. It can be terrifying and destabilizing to question the religious texts you’ve been brought up to revere, even more so when you realize, as the cast said at multiple points in the play, that you won’t find many answers. But in order to truly accomplish the goal of exposing the ways in which women’s narratives have been minimized and misinterpreted in the Christian tradition, the cast needed to acknowledge that many of those women weren’t Christian at all, and that their people – Jews –are also marginalized in the Bible.

After all, despite the fact that we live in a time when cultural appropriation is an issue to which many pay great attention, the church’s millennia-old appropriation of Jewish culture, text, and tradition has largely escaped criticism. Its authorities spent centuries supporting the forced conversion, expulsion, and killing of the people who continued to follow the tradition from which their own religion and culture was derived. True, those offenses have diminished over time; that does not mean they do not deserve acknowledgment and exploration.

I wanted to see these brave, openhearted young women confront this issue. I wanted them to ask what it means that so much of the scripture they studied was adopted from Judaism, and focused on Jewish women. I wanted them to ask what that means given the context of countless Jewish women who, following Christianity’s rise to prominence in the Western World, would go on to be oppressed and persecuted by the powerful hand of the Christian church. I wanted them to at least acknowledge that those stories do not belong to them exclusively, and became part of their tradition at great cost.

As a critic, I thought “The Bible Women’s Project” was a promising, challenging, compelling piece of theater. As a woman, I felt a deep resonance with the questions the cast raised, their conflicted relationship with the texts they studied, and their determination to make the names and stories of the women who preceded them known. But I was saddened and disappointed as a Jew. Women like Hannah and Peninnah deserve to be known by their stories and by their names; they also deserve to be known with a clear, articulated respect for the religion in which their stories are rooted. They weren’t just women. They were Jewish, too.

NYC Fringe Play Tells Stories of Biblical Women — But Where Are the Jews?