Menachem Pressler’s Life in Music From Kristallnacht to Lang Lang 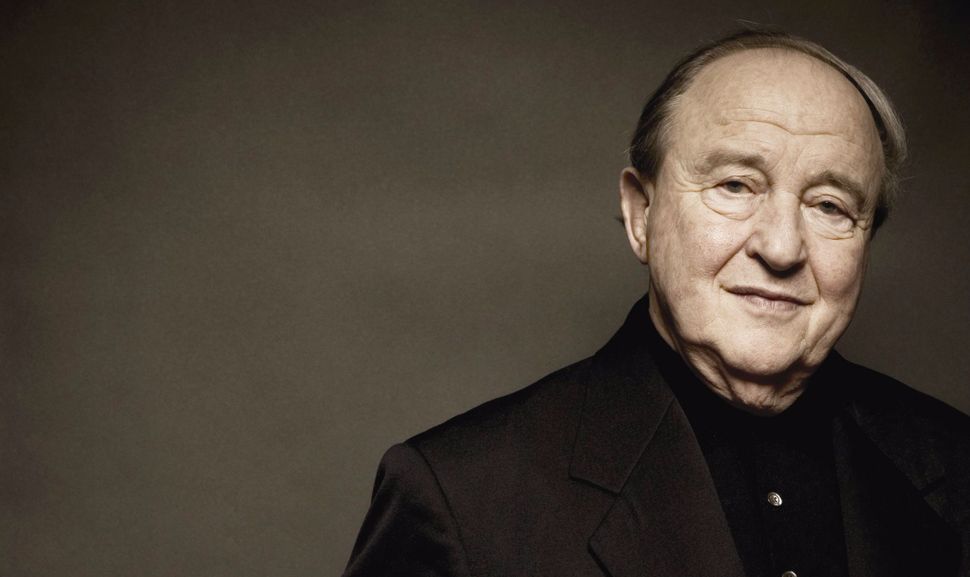 The German-born Israeli-American pianist Menahem Pressler will be 93 in December. Best recalled as long-time cornerstone of the Beaux Arts Trio, Pressler has since thrived as a solo performer and collaborative musician. He also continues a distinguished teaching career at the Jacobs School of Music, Indiana University and overseas. “This Desire for Beauty”, a book of conversations with the journalist Holger Noltze, has appeared in Germany from Körber-Stiftung. During a recent stopover in London, Professor Pressler discussed with “The Forward’s” Benjamin Ivry about the importance of music in his life.

Benjamin Ivry: You have described how during Kristallnacht in 1938, your father’s clothing store in Magdeburg, Germany was wrecked. The next day you practiced the piano as usual. Why?

Menahem Pressler: Piano practice for me was the fulfillment of the inner desire to make music. I had a hunger to practice. Music was for me a religion, although you know I am Jewish and was brought up in an Orthodox house.

After you fled with your parents to Trieste, then Haifa, you suffered from weakness and anorexia until two Israeli boys, the cellist Menachem Meir and violinist Nakdimon Tubin, asked you play with them in a trio. This first trio experience proved a salvation. At the time did it matter that Menahem was the son of the then-Minister of Labor Golda Meir?

That didn’t come into the thought at all. After the two boys spoke to me, I asked, ‘What do you mean by a trio?’ It was an overwhelming experience to play a Schubert trio, so exquisite. Menachem Meir was actually a very good cellist, studying very, very seriously. He kept a journal inscribed on the cover, ‘Menachem Meir, the best cellist in the world.’

Your family arrived in Haifa in October 1939, which was quite late, considering that they had contemplated the move for a while. Why did they wait so long?

This was my mother. My mother believed that Hitler was something that would surely be over soon. By the time they decided to leave, in hindsight we knew it was at the last minute.

You were born Max Pressler, and used the name Menahem in Israel. As you point out, Menahem means consoler or comforter, although since Menachem Begin, the meaning may have been somewhat obscured. Why did you retain the name Menahem after you left Israel for America in the 1950s?

Your teachers in Israel included Leo Kestenberg, an influential music educator who encouraged you to read musical scores through the prism of literature and philosophy. Is this approach possible today when students have less appetite or time to read great books?

The ones who have less time are less educated. They may play the piano more fast and loud for audiences that are less educated. You know the most popular pianist now is Lang Lang, a delightful boy who studied with me a little in Ravinia. You know, culture is not a major aspect for him. I certainly try to influence my students to build an inner life that has meaning. It’s not like a business, to make a living, but to build a life. Like the rabbis, we hope there is a great inner life that is higher up and that, too, I hope for with young musicians.

Kestenberg asked you to call him by his first name, which you found impossible to do, out of respect. Would you ever ask one of your own students to call you by your first name?

Never, and I never could call Kestenberg by his first name. Of course I could not call him by his first name. I never dared to. I regard a teacher very, very highly. [A teacher] is someone in your life who plays an enormous role. To become free of the teacher, who puts you in touch with so many things, means that you grow up inside. You can compare this to a bar mitzvah, when a young boy supposedly becomes a man.

You have discussed the harsh mutual criticism during rehearsals and even performances with the Beaux Arts Trio.. You mention that the violinist Isidore Cohen,, who joined the trio in 1968, had problems with “taste,” and had they not been resolved, he would not have continued with the trio. Did seniority give you the status to say who could play in the trio and what was acceptable playing? The previous violinist, Daniel Guilet, would tell you and the cellist Bernard Greenhouse: “You’re peasants, and you don’t understand.”

No, it was not completely that way. Guilet was originally Guilevitch. He came from [a Russian Jewish family] and went through France. When he played chamber music, he was insulting, it’s true, but not to me. I didn’t feel it as an insult, but Greenhouse did. [Guilet] had some fire in his chamber music. I liked that, I took that and learned from it and it deepened my playing. Cohen was another story. His parents, like good Jewish parents, wanted him to become a doctor, so he went to university. He became the oldest violin student on the G. I. Bill. Now he was a man who had idiosyncrasies, and some of them, in my opinion, led to bad things, so I offered my insights. To have Greenhouse as a cellist was a blessing, one of the most beautiful cellists ever. Cohen’s taste was not as pure, and so there would be fights, yes.

You claim that while the pianist Arthur Rubinstein was “enormously talented, a child of the sun,” Vladimir Horowitz was more of a “hothouse plant.” How so?

You see, the example at that time for any young pianist was Horowitz. He played the most unexpected piano. You could not understand the Mazurkas of Chopin the way he played them. Colors came out you never expected to see. With Rubinstein, the beauty of his playing was so natural that when you heard him you felt, yes, that is the nature of the piece, that is the way I would like to play it. Rubinstein came to hear our trio for the first time and told me backstage that when he was told the Beaux Arts Trio was the greatest, he was sure they had to be three Japanese musicians. Instead we were three old Jews playing.

You call your friend the American pianist and musicologist Robert Levin the Talmudist. Why?

In Los Angeles in the late 1940s, you performed for such celebrities as Alma Mahler and the conductor Bruno Walter.

At the time Los Angeles did not have any air conditioning. I said, Mrs. Mahler, ‘I’m terribly sorry, may I take off my jacket?’ I was very respectfully dressed. She said, ‘You can undress if you want to.’ I remained dressed. When she spoke of Bruno Walter, she used his [original] Jewish name, Schlesinger. She would say, “Oh, Schlesinger loves music.” Bruno Walter was the most beautiful man, and he said to me that one of the most beautiful things that has happened in our world was the creation of the state of Israel.

Oh no, that is not what I meant. I didn’t know that about the colleagues, of course I learn from my colleagues. But when I speak of myself, it means I look within myself for answers and find solutions by osmosis. You do not have to spell it out when investigating yourself. With a student, you do have to spell it out, even if many good ones understand immediately.

Menachem Pressler’s Life in Music From Kristallnacht to Lang Lang