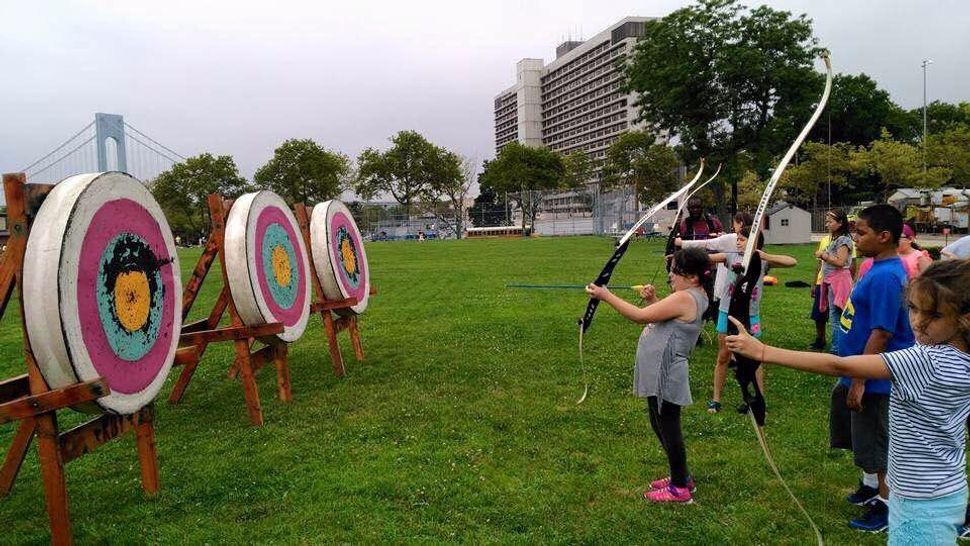 Some of the children who rushed to cool off in the pool on a sunny July morning would not have attended camp together a few years ago. They lived next-door to each other, but their South Brooklyn communities often kept their distance.

Now they splash around in the water before lunch, the only traces of different backgrounds evident on the heads of a handful of youngsters wearing hijabs or yarmulkes.

At the same time that Donald Trump’s calls to ban Muslims is a sign of increased Islamophobia in the country, the leadership at the Kings Bay YM-YWHA has worked to make Muslims feel welcome at the Jewish community center and its summer day camp. And the local Muslim community is increasingly happy to oblige, thanks especially to the help of one Egyptian-American family, whose four daughters all attend the camp as counselors or campers.

“It’s very important for the children to see that there are hijabis [headscarf-clad women] working here, there are Jews working here. They see everyone’s the same and it’s not a big deal,” said 20-year-old Dunia Elbassiony, the family’s second eldest daughter and a counselor at the camp. The fact that no local Muslims were working at a Jewish camp in her community motivated her to build bridges, she said.

The Elbassiony family’s decision in 2011 to send its daughters to the camp was integral in breaking down barriers between the local Jewish and Muslim communities, said Daniel Zeltser, associate executive director at the Sheepshead Bay-based Kings Bay Y. He estimated that today 25 to 30 of the 1,000 campers are Muslim. “We just didn’t have this relationship with anyone in the Muslim community on this official level, and there was no trust in us that it would be appropriate to send kids from a Muslim background to a Jewish community center,” Zeltser said.

Elbassiony recalled being questioned by fellow Muslims when she first started working at the camp.

“Some of the things that were said to me were, ‘Are you sure you’ll be safe there?’ [and] ‘There’s a lot of Muslim organizations, why don’t you try one of those?’” Elbassiony said. But she pushed back, and many of the original naysayers came around.

Having Muslim counselors also has a big impact on their Jewish peers.

Prior to working as a counselor at the camp, Israeli-American Chloe Louzon, 23, had lived “kind of in a bubble.” She studied in Jewish schools and held some negative views about Muslims — but working at the Kings Bay Y camp not only changed her mind but helped her change others’ minds as well.

“Being able to work here, it opens your eyes. Everything is so biased these days about what you hear about Jews and Muslims — it’s really not like that,” she said.

Now when she’s among Jewish friends, she uses her personal experiences from camp to speak out when someone makes an Islamophobic statement.

“I am the first one to stand up at my table and say, ‘You have no right to say that.’ It’s great to be able to do that,” Louzon said.

The presence of Muslim campers and counselors has led to some pushback from Jewish community members, said Zeltser, adding that he encourages dialogue about difficult topics and invites anyone who’s skeptical to visit the camp.

“It’s not something that’s easy, but we treat it as an open conversation and feel that as long as we’re open and honest about who we are, people will respect us for it,” he said. “Everyone who has doubts and says it’s impossible — come over and visit.”

Campers start a typical day by participating in a Hebrew-language workshop with Israeli counselors. But Muslim traditions are also present. During Ramadan, some Jewish staffers decided to fast alongside their Muslim peers, Zeltser said.

He believes the diversity of the camp actually helps his mission of instilling Jewish identity in the Jewish campers.

“Exposing the children to Jewish education and being conscious to the fact that they have a whole other world outside of this makes it much more effective and much more real versus isolating and keeping it just Jewish,” Zeltser said.

Elbassiony, a pharmacy student at Long Island University, plans to continue as an interfaith advocate after the summer ends. Fed up with community pharmacies that she sees catering primarily to certain religious or ethnic groups, she hopes to open a Muslim-Jewish partnership pharmacy. And she will use the lessons she’s learned at camp to help make it happen.

But at camp, often what matters is which team is winning the soccer game or who dropped the bow during archery class.

“We’re not here to judge anybody, to fight or to argue,” said Dunia Elbassiony’s sister Kamelia, who is also working at the camp. “We’re here to do one thing, and that’s to make sure these kids get the best summer.”