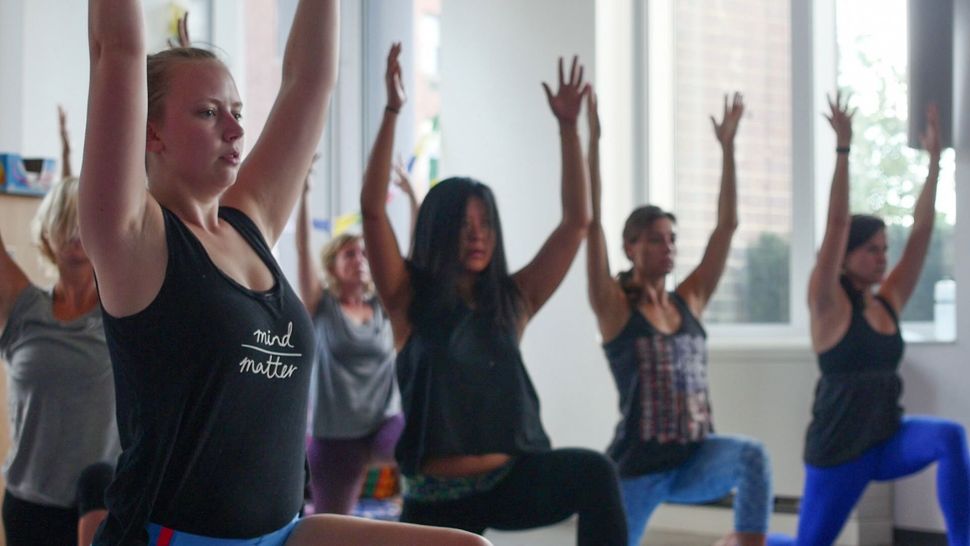 Halfway through the 16-day Breathe for Change teacher-training program – on a day called “Breathe for Communication” – 50 teachers sat inside the Speyer School in Manhattan, eager to learn how to “foster deeper relationships.”

The teachers assumed crisscross positions, like their own students might do. One woman ate a peanut-butter sandwich from a Ziploc bag. Someone else brought a shiny Red Delicious. Everyone had their 457-page ring-bound manual open to page 48 and looked toward Ilana Nankin and Sam Levine, who were seated in front of the semicircle.

Nankin founded Breathe for Change last January in the midst of her Ph.D. work in Curriculum and Instruction at the University of Wisconsin-Madison. She was following eight students into their first year teaching for her dissertation about how teachers teach social justice, but discovered they often felt stressed and overworked and couldn’t properly handle the demands.

“They didn’t have the tools or the community to take care of themselves,” Nankin said. In response, she recruited mentors, yogis and other experts to help combat the burnout that afflicts many of the country’s teachers.

Breathe for Change aims to bring wellness and nourishment to teachers. The theory behind the program argues that if teachers are “well,” the benefits will trickle down to their students. This idea, called social emotional learning, states that if a teacher can manage his or her emotions, focus on the community and become stable in the physical and mental self, he or she can foster positive relationships with themselves and others. “People can only succeed academically if they can do social emotional learning,” said Michael Fenchel, the COO and president of Breathe for Change. But the problem remains how to implement it.

“Everyone is just telling teachers to teach social emotional learning without giving them their own platform,” he said.

Fenchel, who has a soothing voice, scruffy facial hair and a deep tan line from his sandals, believes that smartphones and social media are detracting from students’ ability to focus.

“There’s a huge problem right now. This generation is not prepared to handle the world we live in,” he said. “It’s totally contributing to the rise in attention deficit disorder.”

Like many others who heard about Breathe for Change, Fenchel and Levine both knew Nankin from prior walks of life and came on board after checking out her first workshop in 2015.

Now the organization is a nonprofit. It aims to certify 600 teachers in the next year and take the workshop to Austin, Chicago and Los Angeles. So far, it has traveled to Wisconsin, Berkeley, California, and now “the mecca” of New York City. 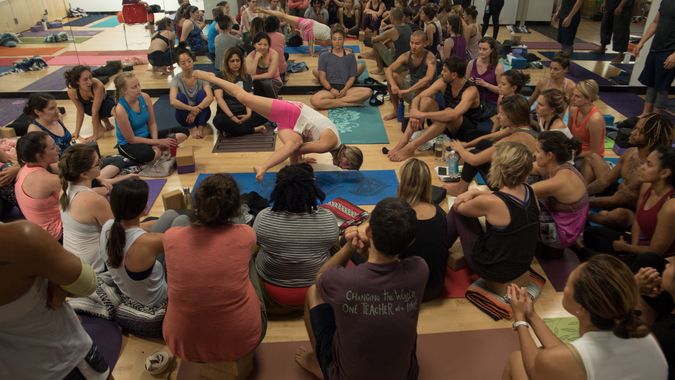 Technically speaking, teachers leave with a yoga certification after completing the $2,500 course, which is increasing to $,3000 (scholarships are available). However, the yoga certification seemed to be an afterthought for the New York attendees, particularly the Jewish educators, who instead eagerly focused on the connections between the workshop’s lessons and Jewish values.

“I didn’t even realize I was going to be certified when I was done,” said Nancy Parkes, the director of congregational learning at Temple Israel Center in Westchester, who came with her daughter. She then listed on her fingers ways in which yoga relates to Jewish prayer.

“Meditation: silent prayer, Amidah. ‘What’s your intention?’ Kavanah. Communication. Listening. Greet everyone with a cheerful face. All of this is wrapped up in Jewish values,” she said.

The curriculum offers other perks in addition to the 16-day course. Upon graduation, teachers in New York can attend monthly “healthy hours” and yoga sessions sponsored by Athleta in its Flatiron store. Breathe for Change also has a platform on Slack, the messaging app popular with companies, for people to connect. One feature is a daily meditation or tip for graduates.

“Breathe will respond to you,” said Levine, about the feature on Slack. Levine runs Breathe for Change’s business-side and helps lead trainings.

• Back inside the classroom, everyone had wrapped blankets or sweatshirts around their shoulders and closed their eyes. Nankin and Levine began asking a series of questions in smooth, liquid voices.

“What strengths do you bring?” asked Nankin before adding, “Really breathe into that.”

Everyone inhaled and slowly exhaled. Nankin let the silence linger before reaching to her left and tenderly laying her hand on Levine’s knee to indicate that it was his turn to ask a question.

“What about in larger group settings?” he asked. More inhaling and exhaling.

After several rounds, Nankin and Levine asked everyone to open their eyes and explained a game. Everyone was to break into groups based on the animal that best suited him or her. Together they listed the animals and mimicked each one’s respective sound and gesture: tiger, eagle, wolf, turtle and rabbit, along with some animated “caws” and roaring.

The teachers’ task was to brainstorm their own strengths and weaknesses from the perspective of their animal. I joined the eagle group because, as one teacher pointed out, my job is to observe.

The lesson, while goofy and engaging, seemed childish, but when I spoke to several educators later, they said they had concrete ways to implement mindfulness in the classroom.

Shira Becher, who teaches second grade at the Hannah Senesh Community Day School in Carroll Gardens, Brooklyn, said she uses a breathing ball in her classroom. She has her students inhale as the ball expands and exhale as it contracts. They do this three times before Shema, or morning prayer.

“Mindfulness helps me to be more patient,” Becher said. “It’s easy to see a student as a thing to move from point A to point B. It’s very easy to brush off a child and move on to your so-important lesson plan.” Parkes was also pleasantly surprised about how applicable the workshop was to her job, though she said the point wasn’t necessarily to bring techniques to the classroom, but to learn how to apply the teachings to all aspects of life.

“We don’t want to keep it confined to the classroom,” she said of Judaism, comparing it to Breathe for Change. “We teach Judaism because we want you to live it.”

When it was the eagle group’s turn to share, it had, as instructed, come up with a pose to represent the animal. In front of the friendly rabbits and shy turtles, a teacher named Adam imitated an eagle crouching on a yoga block with his arms wrapped around his body. He slowly rose up, untangled his arms and spread them wide. In a final pose, he gazed down as if flying high.

Britta Lokting is the Forward’s culture fellow. Contact her at lokting@forward.com