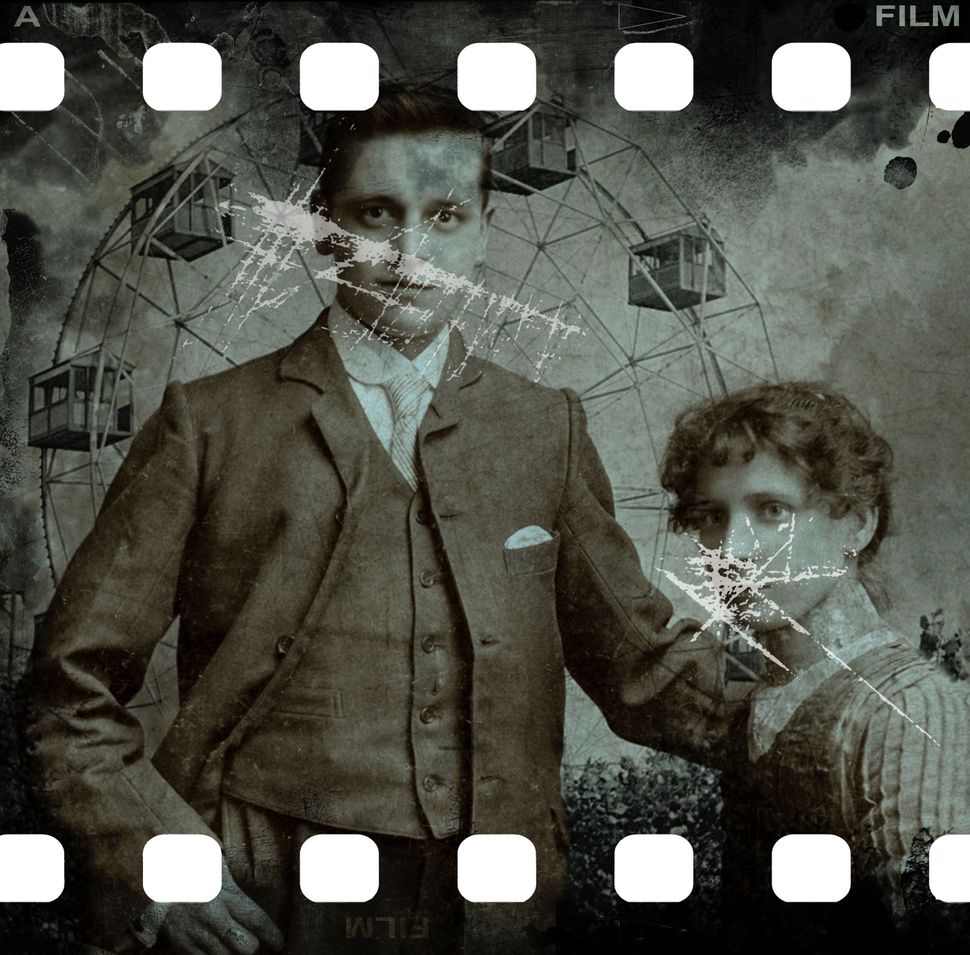 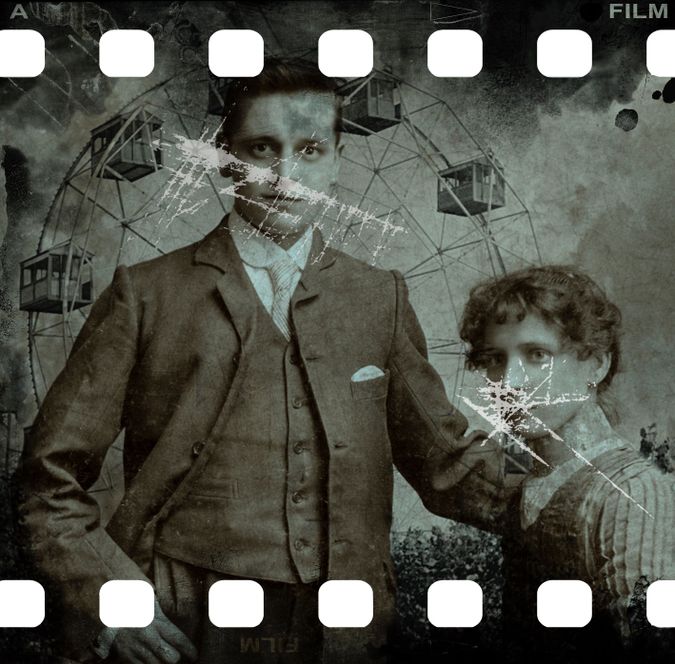 In the first issue of The Partisan Review in 1935 Delmore Schwartz age 21 published this remarkable short story and was instantly recognized as a writer of unusual quality. The story, “In Dreams Begin Responsibilities” is as powerful today as it was at the time, maybe even more so.

The story opens in a movie theater. The narrator is watching on the screen as his young father is on his way one Sunday afternoon to pick up a women he is courting at her family home in Brooklyn. He greets her parents, makes some uncomfortable small talk while she prepares to leave the house with him and then we, along with the narrator, watch the film as the young couple walk to the trolley that will take them to Coney Island for the afternoon. We sense the eagerness and flirtatious intensity that floats between them along with the anxiety they both feel in this courtship. Both young people are immigrants who are making their way in America. The narrator reports to the reader what he is happening on the movie screen.

He describes the waves that his mother is watching from the boardwalk above. The narrator tells us, “They finally crack- dashing fiercely upon the sand — I stare at the terrible sun and the fatal merciless passionate ocean.”

His not-yet-parents ride the merry-go-round and his father wins 11 rings but his mother who really wanted them gets only two. All these details and harsh adjectives are like music that warns of danger, of disaster just ahead. The young couple enter a restaurant for dinner and as the meal is about to finish, the narrator’s father asks his mother to marry him and she begins to weep. The narrator leaps from his seat in the movie theater and yells at the movie screen, “Don’t do it.. It’s not to late to change your minds, both of you, Nothing good will come of it, only remorse, hatred, scandal and two children whose characters are monstrous. “ the audience hushes him. The usher tells him he cannot behave that way in the theater. He settles down.

In the movie the newly engaged couple pass a fortune teller booth and she wants to go in and he does not and he gets angry at her insistence. The narrator says, “What are they doing? Why doesn’t my mother go after my father and beg him not to be angry? The narrator leaves the theater for a moment to recover himself. He returns as he sees his parents on the screen going to a photographer who will capture the moment of their engagement on his camera. But the pose is wrong. The photographer can’t get the lighting right. He fiddles and fiddles until the narrator’s father yells at him to finish. His father’s smile has turned to a grimace, his mother’s bright and false.

An usher tells the narrator he must behave in the movie theater. But we the readers understand that the sorrow of our narrator is more than he can bear silently. We cannot change the past, or save ourselves or those connected to us. The waves will come as they come. We don’t get a second chance.

The immigrant generation, (1880’s to 1930) and their children had tremendous economic opportunity in the “Golden Medina.” Some people did really well and others survived better than they would have in the shtetls and towns where they were born where opportunity and education were so limited. But along with this upward thrust towards security and integration into American life came many dislocations and emotional troubles as men and women floundered in the new world that welcomed them but couldn’t explain to anyone how to love, or how to live.

The young couple in Schwartz’s story are ill suited to each other. They wanted to experience love and find all the warmth and caring that life requires in each other’s arms but they didn’t realize that they actually had different means of expressing themselves, different emotional expectations, and maybe even a missing sexual connection that the prudery of the times prevented them from noticing.

This is not particularly Jewish, or a Jewish problem alone but it is a problem of dislocation, of families separated by an ocean, of folks confronting new styles of courtship, new opportunities to be themselves, or to find themselves. Over and over we read in the Bintel Brief, of the earlier days of the Forward, in the early writings of Jewish immigrants, Henry Roth, Michael Gold, Anzia Yezierska, later Philip Roth and Saul Bellow, of passions gone astray, of relationships between men and women going sour, spoiling like milk left too long in the sun.

Of course that is the stuff of literature the world over, Madame Bovary and Anna Karenina were not Jewish immigrants but Jewish immigrants were Emma Bovary and Anna Karenina. But we know that the particular kind of unhappiness that Delmore Schwartz was writing about was not uncommon. Along with the expectations of wealth came the rage of male against female. Along with the desires money aroused came the fears of failure. The hard work required to survive in an America that offered a lot to the fast and the eager and nothing to the plodder or the unfortunate, created its own cultural soup in which the Jewish soul was seared and dissolved.

Yes, there were wonderful Jewish marriages that lasted into a comfortable and romantically brilliant old age but there were also marriages where the toughness of life wore out the ties that should have bound man and women together. The opportunity for changing places, lives, selves in America freed some from their wedding oaths or at least placed such a burden on them that there was nothing in the house but pain and diminished hope. A lot of men fled their homes. A lot of women broke their vows. A lot of children longed for absent parents. A lot of children wished a parent would vanish.

When Delmore Schwartz’s character leaps to his feet in the movie theater of his mind and shouts out to his parents on the screen, “Don’t do it,“ many of us recognize that moment, would have called it out, in just those words, to our own parents.

Movies for the children of immigrants were like college educations. They provided the sounds of better English, they provided a view of America that their parents could not give them. Movies made them laugh and offered them double features for very little money. Movies showed these children what else America could be for them besides the streets and synagogues and playgrounds of their own neighborhoods. It is no accident that this story is set in a movie theater, its own kind of house of worship.

The intellectuals at the Partisan Review, (Irving Howe and friends), understood that America could not provide, in itself a capacity to love and be loved. This fact was not particularly Jewish but very sad, sad enough to make the children of such mismatched parents, whether Irish, Italian, German or descendants of the Pilgrims become lost in the forests of American opportunity.

The usher in Schwartz’s movie theater chides the young man for his noisy public display. The usher is the censor, the conformist culture, the repressor of emotions. The usher is the unforgiving critic of the hurt child. Lucky for us the writer paid no attention to the usher who would have kept him quiet if he could.

And Delmore Schwartz, young as he was when he wrote this story, knew that the primary victims of these awful mismatches were the first generation children who listened and watched as the joy was drained from their mothers and fathers, as life and its emotional turmoil became heavier and heavier even as many of these same children climbed the academic ladders of success becoming as American as the flag itself.

Woody Allen would soon take up the story himself, making his own movie.

How did Delmore Schwartz know all this when he was barely of voting age? The ways of our homes, the ones we were children in, become the never ending puzzle of our lives, not only for those who read Freud but for all of us who need answers for what went wrong, the why of the bad turns we take. In those first years of adulthood we are still close to the source of ourselves. Right there at the rocking cusp of adulthood this poet -writer wrote this masterpiece of a Jewish story.