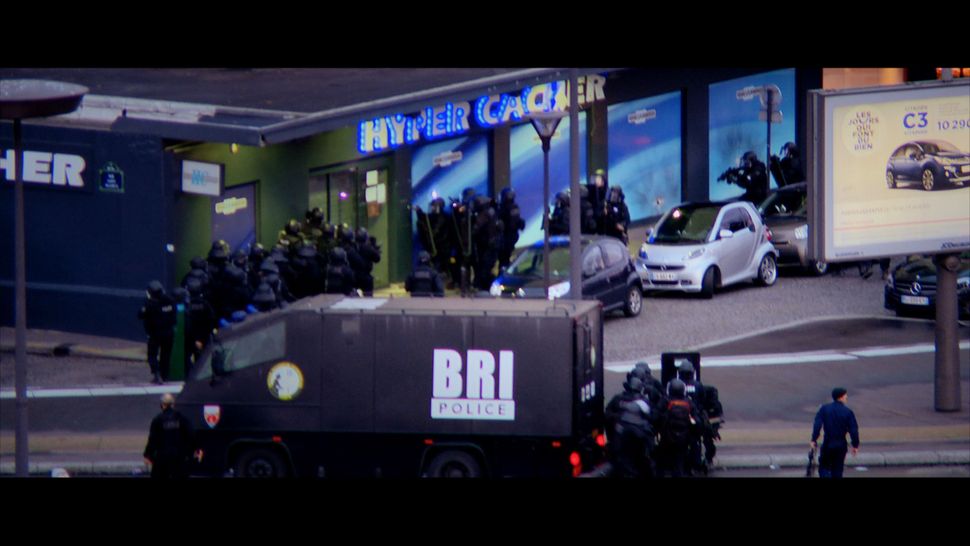 The cashier tried to stop him. You can’t come in now, she said. But he brushed past her, explaining he just needed bread for Shabbat. Moments later he was dead.

All this was recorded on security footage at a kosher supermarket in Paris, a reminder — if one were needed — of the frailty of life, of how we live in an age that requires constant vigilance, and of the cruelty man is capable of inflicting.

It is one of many memorable scenes in Dan Reed’s “Three Days of Terror: The Charlie Hebdo Attacks,” which originally aired on the BBC and debuts on HBO Sept.19 at 8 p.m. ET.

It’s been more than a year-and-a-half since much of the world at least metaphorically decided “Je Suis Charlie.” Typical of such events, in real time confusion reigned supreme: the media descends and begins a feeding frenzy; the people in charge don’t understand the magnitude of the event they are responding to; and meanwhile, the public sits glued to TV set as (often inaccurate) information is released in dribs and drabs.

On the morning of Jan. 7, 2015, Cherif and Said Kouachi, French-born brothers of Algerian parents pull up to the offices of the satirical magazine, Charlie Hebdo. After first entering the wrong building, the pair, who claimed loyalty to Al Qaeda of Yemen, kill a maintenance man in the front entrance of the correct building.

The shot catches the attention of workers at Premieres Lignes, a TV film production company with offices on the same floor as the magazine. An assistant looks out the window, sees two men with automatic weapons and at first assumes they are police. Eventually she realizes the truth and calls the cops, but it takes a long before anyone answers the French equivalent of 9-1-1; she believes others are flooding the police switchboard with calls.

Binoit Bringer, a producer, relatively quickly surmised what was going on. He had a nodding acquaintance with the Hebdo staff, but did not have the magazine’s phone number. Through the peephole, he could see nothing was happening yet on the floor. Could he or anyone else have run over and warned Charlie Hebdo? Maybe. Who knows how one might react under those circumstances? Instead, the Premieres workers barricaded the door, and rushed up to the roof through the office to start filming.

Meanwhile, Corinne Rey, leaving the office to pick up her daughter from daycare, is forced to go back up stairs and punch in the code that opens the Charlie Hebdo bullet-proof door. They are in the office fpr just two minutes, firing 36 shots and killing 10 more people.

The gunmen leave the building and head to their car when three policemen, apparently unaware of what was going on, bicycle by. Premiere staffers shout from the roof to point the police in the right direction, but the gendarmes apparently don’t hear, round the corner and eventually are fired upon by the brothers, who spend time shouting “allahu akbar” and “We’ve revenged the Prophet Muhammad.”

Eventually — and it seems that it took forever — a police car arrives and blocks a narrow street. However, the cops are forced to retreat under whither automatic weapon fire.

The brothers flee, but stop and shoot a policeman, ironically himself a Muslim, wounding him first and then calmly walking up to him and administering a coup de grace. Then they disappear: their final total 12 murdered, many others injured.

The next day a lone gunman murders an unarmed community police officer and flees. At first, police say the two are unrelated. But they are not.

Amedy Coulibaly, French born of Muslim parents from Mali, was the gunman. Although in a video he made before his attack, he says his crimes were planned with the Kouachi, whom he knew, it’s not certain that’s entirely true. Certainly Amedy’s attacks were at the very least inspired by his friends’ actions.

Finally on Friday, Coulibaly invades the kosher hypermart, killing another four people before the store is rushed and he is brought down in a hail of bullets. A few hours earlier, the Kouachi brothers rushed the police waiting outside the printing plant where they, too, fell in a torrent of bullets.

The final tally of the terrorists: 17 dead, 22 injured and a city — a world — shaken. This is his Reed’s fourth Terror documentary for HBO; he’d already covered Mumbai, Russia (the Moscow Theater hostage crisis) and at the Nairobi, Kenya, mall. His experience serves him well. He mixes actual footage with talking heads effortlessly and perfectly. There isn’t a comma out of place.

Seeing it and hearing effectively bring the anguish home.

He even has a perfect closing, an interview with Dr. Jean-Pierre Tourtier, the chief medic of the Paris Fire Brigade. He was nearby and one of the first on the scene at Charlie Hedbo. Ten months after the attack, on Nov. 13, 2015, he talks to the camera about the bravery of the first responders, who risked their lives as they rushed to a scene to save others’ lives.

Just a few hours after the interview ended, Tourtier rushed out again this time to the Bataclan Theater, where 90 people were killed.