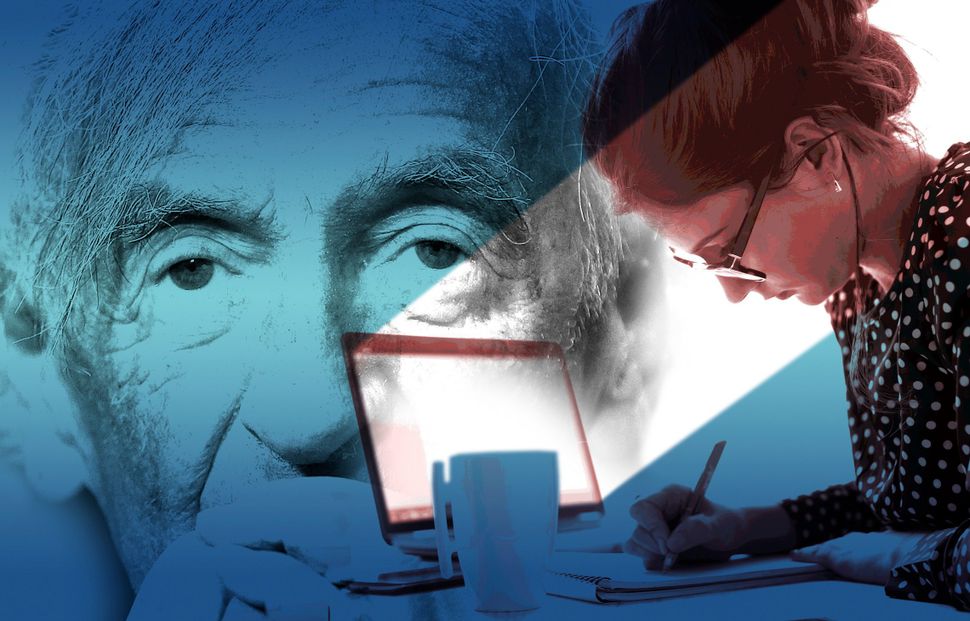 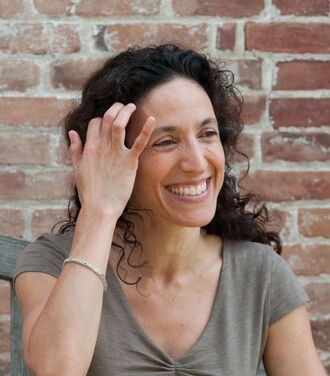 It was only a few weeks into my first semester of graduate school that things began to go awry. The M.A. Creative Writing workshop that autumn was led by a writer I admired; my fellow students were savvy and talented, energetic in their critiques of each other’s manuscripts.

I’d just returned from a stint working for a women’s rights organization in Jerusalem, and I launched immediately into writing fiction about Holocaust survivors and their families, and about Israelis living amid complex political realities.

Midway through the first critique of my work, though, one of my fellow students pointed out that a scene didn’t make sense. “Orthodox Jews only have sex through a sheet with a hole in it, so the scene couldn’t happen this way.”

I raised my hand to correct this peculiar notion. To my surprise, the workshop instructor indicated that I wasn’t to speak.

It’s standard writing workshop etiquette that the writer whose work is on the floor isn’t allowed to speak during the preliminary discussion of his/her work, except perhaps to correct a fact. The final portion of the workshop hour is generally turned over to the writer, at which point he or she can explain, defend, question, or accuse to heart’s content.

The instructor of this particular workshop, however, had imposed an unusual rule: the student being critiqued wasn’t allowed to speak even at the end of the critique. No questions, no clarifications, nothing.

I went home that day without correcting the myth about Orthodox Jews. 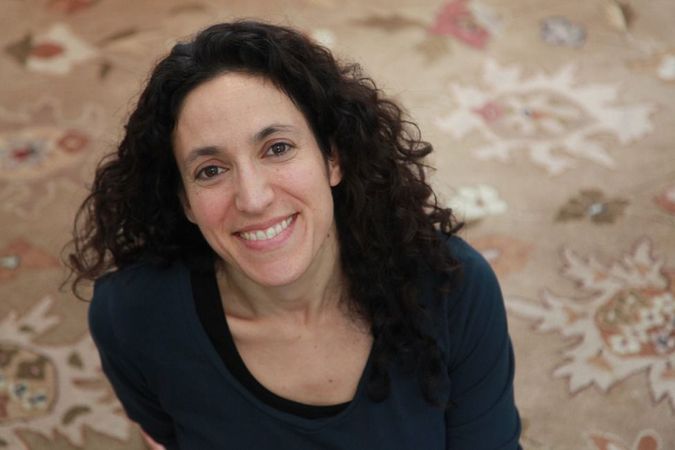 The next round was worse. This time I’d submitted a piece set in Israel — what would become the opening chapter of my novel. One scene featured an awkward encounter between a lonely middle-aged woman and a delivery man she’s known for years. The instructor kicked off her comments by saying: “These characters should have an affair here, because Israel is a promiscuous country.”

The instructor went on to assert that my character’s goodbye to her soldier son should be more dramatic because she was sending him off to battle (in fact there was no war in Israel at the time—the son in the story had come home from his base for the sabbath to do his laundry).

Raising my hand, I asked if I could clarify a historical fact that I might not have made clear enough on the page. I was told to remain silent. So the class spent the next twenty minutes discussing the emotional impact of a nonexistent war on my characters.

Every writer needs a fairly thick skin about the work. But I grew up amid Holocaust survivors—my grandparents and great-aunts and uncles. I’m viscerally aware of in the danger of stereotypes, and loath to let them go by without trying to combat them.

Since it seemed I’d have no chance to do this verbally, I considered trying to stereotype-proof my work. All week I labored at this new game—adding explanatory phrases to guarantee that situations and characters couldn’t possibly be misread. There seemed no smooth way to do it (Shifra and her husband, who incidentally did not have sex through a sheet with a hole in it…). Every effort I made coarsened the writing.

I debated leaving the program. I couldn’t see the point in writing workshops that limited my freedom of honest expression and made my writing worse in the process. And remaining silent while people blathered nonsense about Jews felt like a betrayal of the survivors I’d grown up with.

Around then, I ran into an old friend who offered me a spare ticket to a lecture that evening by Elie Wiesel.

Wiesel’s subject was the book of Isaiah — but his subject felt incidental. He spoke softly, his hands as eloquent as his — his hands the hands of every survivor I’d grown up with—people who told stories to stave off darkness. Sculpting emotion in the air with the gentleness and precision of an orchestra conductor.

Though I’d read several of Wiesel’s books as a teenager, I’d grown up on my own relatives’ stories and so never felt the need to sit at anyone else’s feet in order to learn about the Holocaust. But as I watched Wiesel now, I realized this was something I’d never encountered. All my life, I’d argued against my survivor-grandfather’s vehement parochialism (you can’t trust your non-Jewish friends; I trusted my non-Jewish friends in Poland, and they betrayed me); I’d countered that in the relative safety of the U.S., pluralism and trust were possible if people were willing to reach out and exchange stories. It was an impossible argument, because even when I was convinced I was right, I was choked by guilt — who was I to argue with someone who had lived through what my relatives had?

Yet here stood Wiesel: a survivor who somehow walked the tightrope between good for the Jews and artistic freedom.

I went directly home that evening and wrote a heartfelt, embarrassingly long letter describing my grad-school conundrum. The next morning, before I could chicken out, I mailed it to him.

I expected no reply; when Wiesel wasn’t lecturing that fall, he was showing up on news broadcasts from Bosnia, riding off in a jeep wearing a helmet and a mournful expression. If only those hands could persuade the world to see reason…

To my surprise, though, a reply showed up in my mailbox a few weeks later. The handwritten note said:

Dear Rachel Kadish — In haste: thank you for confiding in me. Do not listen to others when you write; listen only to yourself. No voice should cover your own. With best wishes, Elie Wiesel

He had answered not as a Jew or as a survivor, but as a creative artist.

I stayed in grad school. That first difficult workshop was followed by others led by instructors who allowed writers to speak their piece. Gradually the short story in which that woman did not have the affair with the delivery man morphed into chapter one of a novel. And when, a few years later, that novel was accepted for publication, I wrote to Elie Wiesel to thank him yet again, and to tell him how things had turned out, he could not have been more gracious.

I never contacted him again after that. I’d been stunned by his generosity in advising a stranger. To ask any more of his time would have felt greedy.

Yet my conversation with him continued silently across the years — because the writing life, it turns out, isn’t all that different from a workshop in which the author is never allowed to speak (this might have been my long-ago instructor’s point).

Good fiction is descriptive, not prescriptive. It offers the human heart in its full complexity, whether or not characters’ stories culminate in politically correct conclusions.

I know that in my gut. But in an often frightening and frightened world, the pull of prescriptive writing is undeniable—and whether the subject matter at hand is feminism or sexuality or racism, the temptation to armor up a piece of work to make sure it can’t be misinterpreted is ever-present.

Yet though I remind myself of Wiesel’s words again and again, I can’t say I always follow  — nor even that he would have in all circumstances. Risking stereotypes in an American writing workshop is different from risking them in the real world.

In that first novel that I wrote in my twenties, I’d deliberately waved the flag of artistic freedom in the face of anti-Semitic stereotype. If we’re to treat Jews as full human beings—so went my reasoning—then we need to assume that because humanity exists on a bell curve, every ethnic group contains people who are smart and dumb, loving and gentle and hateful and violent…and yes, even greedy. To avoid admitting the possibility that a particular Jewish person might fit any given description is itself a capitulation to racism—because don’t people of every stripe have the right to be as uniquely quirky as they like?

With this in mind, I’d inserted into my novel — which was populated by Jewish characters of every description — a throwaway one-line reference to a Jew who happened to be greedy.

The galleys for that novel reached me when I was traveling in Poland. There I was in my hotel room in Krakow, finalizing a novel that I knew would soon be translated to German.

No voice should cover your own….? Perhaps. But I needed to sleep at night. Right or wrong, I deleted the line.

Wiesel was many things to many people, but to me he was foremost an artist—one who recognized as deeply as any the dangers of human prejudice, yet trusted that a solitary voice doing its best to speak the unvarnished truth is nonetheless the best hope we have. His simple message is still the horizon for which I aim, even when I fall short.

Rachel Kadish is the award-winning author of the novels, “From a Sealed Room” and “Tolstoy Lied,” and the novella, “I Was Here.” Her work has appeared on NPR and in the New York Times, Ploughshares, and Tin House. Her new novel “The Weight of Ink” will be published by Houghton Mifflin Harcourt in 2017.