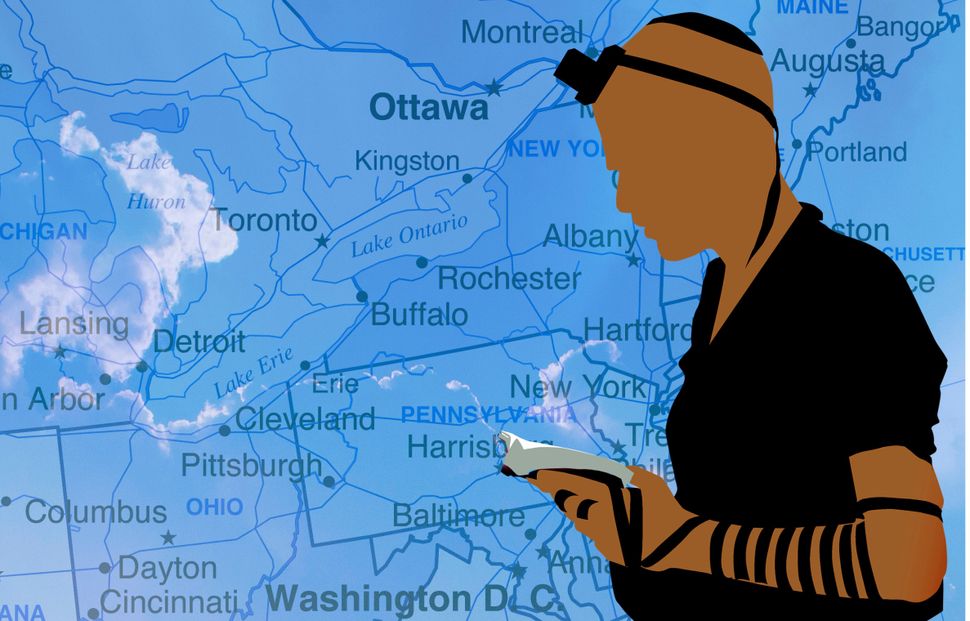 Just over a month ago, my dearly beloved father, Dr. Stephen S. Kutner z”l, passed away, right before my family and I had planned to take a complicated three-week East Coast road trip.

After sitting shiva we decided to go through with the trip. And as a Jew mourning an immediate family member, that meant I had to quickly locate an active daily (and to my preference, egalitarian) minyan in which to say Kaddish for every day of the trip — in seven different cities.

On day one I was in Arlington, Virginia, and the closest Conservative minyan-ready synagogue was Alexandria’s Congregation Agudas Achim. It so happens, that’s where my wife and I got married. So as I rode the Uber over, I imagined the symbolic beauty of such a “homecoming,” of a place that had hosted my previous major life event now, “Giving Tree”-like, throwing open its welcoming arms again.

Only one problem: There was no minyan; they were off-site at a congregant’s shiva.

Fortunately, just as I prepared to give up, a busload of kids from United Synagogue Youth rolled in. Could I wrangle these energetic Jewish youths to help me fulfill one of the paramount Jewish obligations? The answer: Yes! Once they’d eaten.

They were famished after a nine-hour bus ride from Charlottesville, Virginia. I’m not sure they were expecting to have a scraggly bearded mourner hovering impatiently over them while they shoveled potatoes au gratin from a steam tray. But once sated, they came together for me marvelously.

After that, I started attending morning minyan at Agudas and fell into a rather soothing rhythm that I would find at so many other places during my journey: swaying with a small group of leather-clad Jews while the white morning light pierced through from the East, to which we were praying.

There were other commonalities across the minyan experience, too. Most notably, the do it yourself aspect. Only two of the eight places I prayed in even had rabbis (At one, they wryly told me, “He’s still at home across the street, asleep.”) Daily minyanim are also breathtakingly punctual. I am not, but mercifully the Mourner’s Kaddish is at the very end of the service. They’re also all business. They wrap tefillin and get to work. And the ones that have trouble getting 10 during the summer have call sheets so that they can phone in backups.

More touching was that daily minyanim tend to grow into sweet, haimish, or homey, little communities. They’re a regular crew who know each other well. At Newton, Massachusetts’s Temple Reyi, no sooner do the tefillin loosen than someone asks another, “Heading out to the Cape this weekend?” Morning minyanites are co-workers bantering around the water cooler of the Holy Ark. That said, despite always being the “outsider,” I was welcomed warmly at each.

There were also some amusing quirks shared across the board. These tiny groups of 10–20, meeting at “off-peak” hours, were never in the cavernous sanctuary. Rather, I had to track down each one in each new giant synagogue’s bewildering variety of auxiliary rooms. At Caldwell, New Jersey’s Agudath Israel, a sign told morning attendees to go around to the loading dock. I still managed to go to the “wrong” loading dock, and was later told that the official way to get in was to find the library and “just bang on the window.” One non-Jewish synagogue employee had no idea of the minyan’s existence, and said, “I just work at the school.” At another, I couldn’t get the Torah reading that I’d agree to chant photocopied, because there was no one around in the building yet with the copier code.

But for all this, there were subtle regional differences. Washington, D.C.-adjacent Agudas lists a 7:30 a.m. minyan but a luxurious 9 a.m. on “Federal Holidays.” In New York, one synagogue failed to have its promised minyan, so I had to hike a grueling two blocks to find another. At Annapolis, Maryland’s Kneseth Israel, there is a Naval Academy flag on the bimah; the social hall honors an undersecretary of the Navy, and, if I’m not mistaken, the gabbai, or sexton, holding the Torah uttered “Sh’ma Yisrael” with an extra-crisp air of authority.

So what did I learn from my five-state, seven-city survey of American minyanim? That I am in awe of anyone who drags himself out of bed (or away from dinner and Netflix) to make these, day in, day out, year-round — not just because of an obligation. These folks are the pilot light of Judaism, if not the ner tamid, the lamp by the Ark. As such, they are a delicate institution. I can’t help but note that, at age 44, I was the youngest in every single one. I hope that’s a function of older people rising earlier or working shorter hours — not a sign of future obsolescence. But for now, I’ve got 10 more months of hardily committed folks to pray with, learn from and be inspired by. And enough potatoes au gratin to go around.