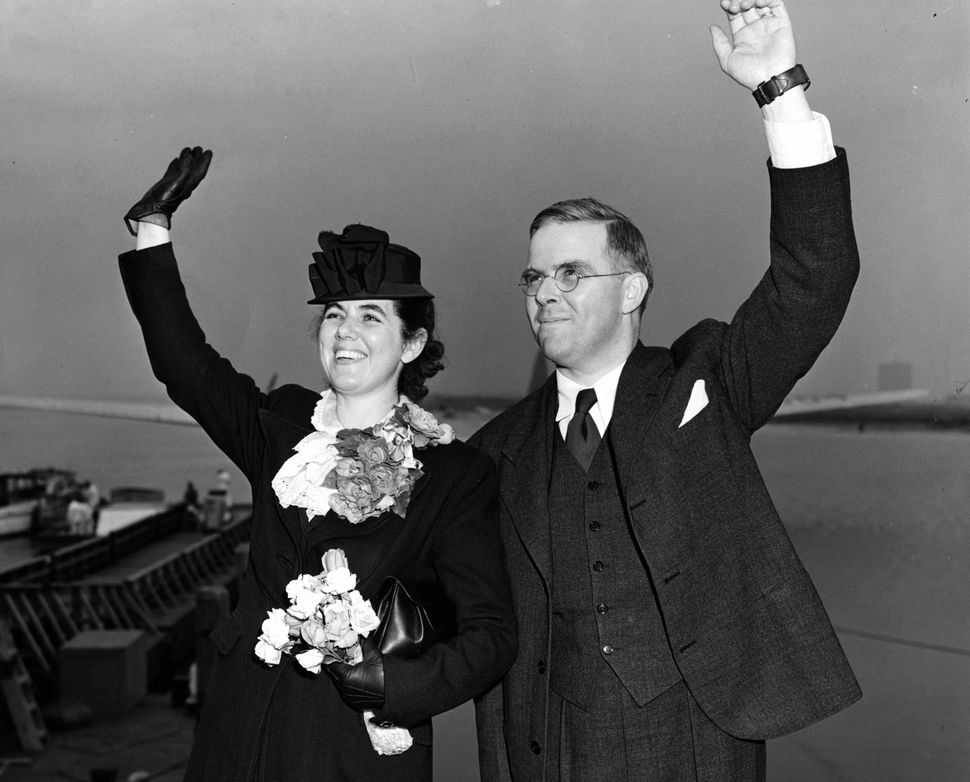 Martha and Waitstill Sharp Image by Courtesy of Beacon Press

Defying the Nazis: The Sharps’ War
A film by Ken Burns and Artemis Joukowsky
Premiering 9 p.m., September 20, on PBS

In some respects, Waitstill and Martha Sharp resembled other Holocaust rescuers: They were motivated by strong religious and moral convictions, and they viewed their wartime heroism as nothing extraordinary — simply what others in similar circumstances would have done.

But the nature of their circumstances distinguished them from other rescuers. Rather than living under Nazi occupation, the Sharps were leading a comfortable existence in Wellesley Hills, Massachusetts, where Waitstill Sharp (1902–84) was a Unitarian minister and Martha Sharp (1905–99) a social worker. Then, in January 1939, an exhortation to help jolted them from that life forever.

Their largely unknown story is the subject of “Defying the Nazis” — both a documentary on the Public Broadcasting Service co-directed by Ken Burns and Artemis Joukowsky, and a companion volume by Joukowsky, the Sharps’ grandson. Dodging surveillance, navigating bureaucracy, laundering money and facing down Nazi officials, the Sharps saved at least 125 lives, Joukowsky estimates.

The film and book approach the narrative somewhat differently, as one might expect. Because the Sharps’ activities were mostly clandestine, the documentary relies liberally on visual and aural re-creations, including Tom Hanks and Marina Goldman reading the Sharps’ letters.

These moments are seamlessly interwoven with archival film, photographs and interviews featuring scholars, survivors and the Sharps’ children, Hastings and Martha Content (Joukowsky’s mother). Images of Nazi predations, maps and a broad range of voices contextualize the Sharps’ achievements.

The book, while lacking the film’s sweep, provides far more detail on the couple’s activities. Joukowsky’s narrative is linear, straightforward unadorned, while his research is painstaking. Although his grandfather died and his grandmother succumbed to dementia before he could fully record their experiences, Joukowsky has accessed a personal archive containing their love letters and various mementoes of their missions, which he has supplemented with interviews and other primary sources.

The minister and his wife were not the first choice of the American Unitarian Association to aid refugee-choked Czechoslovakia. The association turned to the Sharps for its first-ever international relief project only after 17 other couples had said no. Impelled by the urgency of the situation, the Sharps accepted the challenge, even though it required leaving their two young children in the care of friends.

In London and Paris, the couple received background briefings and training in spy craft, including how to lose a tail, encrypt information and destroy incriminating documents. Then they set up shop in Prague to scout out worthy relief projects. Hitler invaded shortly afterward, on March 15, 1939, and “civilization…,” Waitstill later wrote, “ended.”

Under Nazi occupation, political dissidents and Jews grew desperate for asylum and visas. The Sharps’ priority changed to facilitating “immediate escape.” In one case, Joukowsky writes, Martha had “a defining Mata Hari moment” when she eluded a presumed Gestapo agent and faced down German soldiers while escorting a man known only as Mr. X to the British Embassy. (The documentary suggests that he may have been a dissident Czech journalist.)

Together, Joukowsky writes, the Sharps sought “to master the intricacies of immigration law in dozens of countries, lobby contacts for money, arrange for escorts, coordinate with other aid organizations, and manage endless details while trying to avoid trouble with the Gestapo.” In service to their mission, Waitstill became “a black-market currency broker and bagman.” At one point, Martha Sharp led 33 refugees out of the country by train, a harrowing expedition.

The Sharps left Prague in August 1939, just weeks before Hitler’s invasion of Poland began World War II. But a few months later, their church pressed them to accept a second mission. It was more a demand than a request, and the two — particularly Martha Sharpe — agreed only reluctantly.

Still, their accomplishments were impressive: The couple organized a train from Portugal with milk for starving French children. Waitstill, working with the American journalist Varian Fry, arranged the escape of the German Jewish novelist Lionel Feuchtwanger and other intellectuals via Portugal, while Martha Sharpe spearheaded the trans-Atlantic passage of 27 Jewish children from Vichy France. Among those saved were 13-year-old Czech triplets, the Diamante sisters, who appear, charmingly, in the documentary.

Along with celebration of the Sharps, an undertow of sadness animates both the film and the book. There is, of course, grief for all those who weren’t saved, to whom the documentary is dedicated. A second source of melancholy is the collapse of the Sharps’ marriage.

Husband and wife could not have accomplished what they did without a close, trusting partnership. “You are not only beautiful, but a brick…. Venus and Minerva cast in one blended statue of loveliness and wisdom,” Waitstill wrote to his wife during their first mission.

Yet the work also demanded stressful separations. Ghanda DiFiglia, whom the documentary describes as the Sharps’ biographer, says that Martha Sharp, who ran unsuccessfully for Congress in 1946 and later initiated the divorce, became more independent. Their daughter suggests that the initial emotional crack between the two was caused by their second, six-month mission. “That was the beginning of when they began to lose each other,” she has said.

In time, both would remarry and continue to lead socially conscious lives — Waitstill Sharp as a minister and civil rights activist, and Martha Sharp as a federal administrator at a Cold War civil preparedness agency and as a fundraiser for Jewish causes. In sharing the Sharpes’ stories late in life, Joukowsky concludes that the estranged couple was able “to reconcile and to appreciate each other anew through memory” — no doubt a grandson’s fervent wish.

In 2006, Israel’s Yad Vashem named the Sharps as Righteous Among the Nations, an honor accorded to only five Americans.