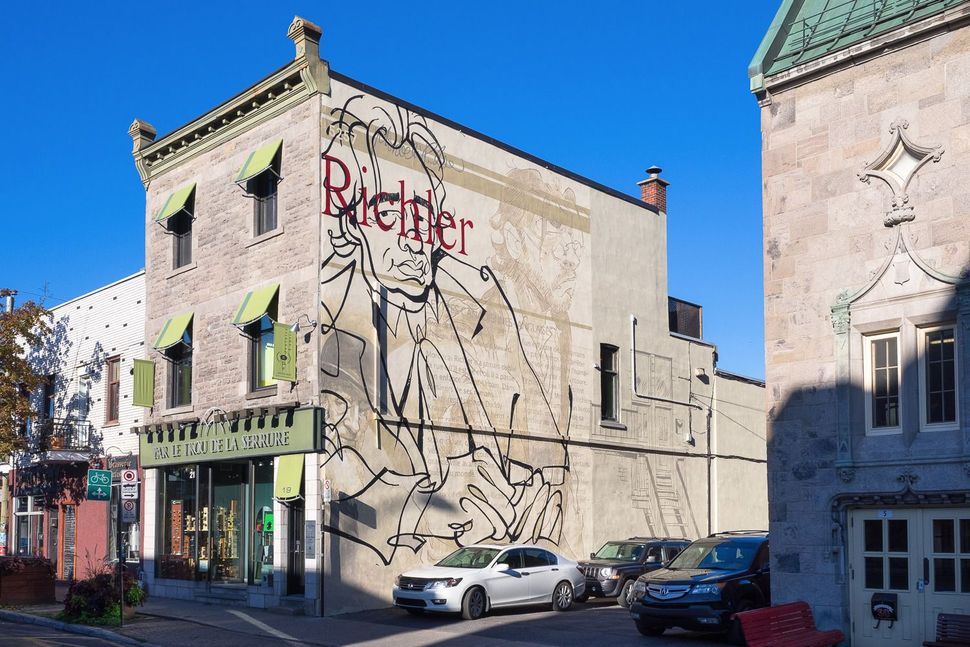 Mordecai Richler has always been a larger-than-life presence in Montreal. Now, that’s literally the case.

The City of Montreal has unveiled an official mural dedicated to the late author, who captured the city’s singular Jewish character — and skewered its often surreal language politics — in potent essays and canonical novels like “The Apprenticeship of Duddy Kravitz.”

The mural superimposes the word “Richler” on an elegant caricature of the writer in mid-life. Along with the enormous likeness, artists Dominique Desbiens and Bruno Rouyère included an excerpt of a French-language review of Richler’s 1968 short-story collection “The Street.”

The wall art – one of a dozen honoring Montreal artists – has earned at least one prominent fan. “I like it,” Noah Richler, the author’s son, told the Forward from Toronto, where he’s a prominent author and broadcaster. “I like the height of it, the way he is peering down. I like the figure in the shadows and the integration of text. It makes more sense to me than some engraved plaque or piece of stone. It has a vibrancy, it’s alive. It demands you engage with it. And there’s no sneaking around it, is there?” 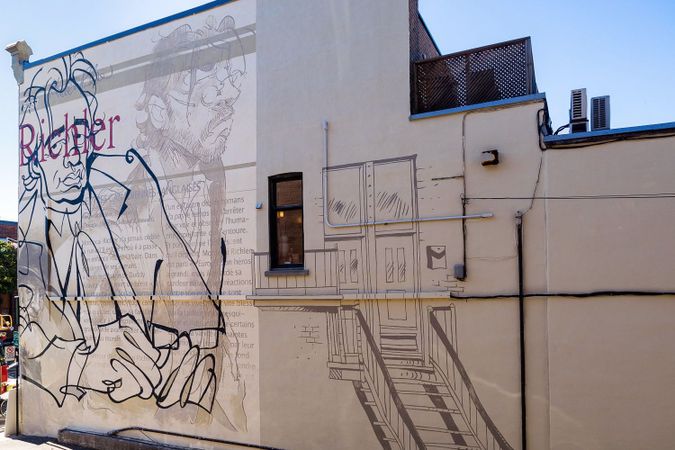 Considering Montreal’s sometimes fraught relationship with Richler — who alienated many political hardliners after a 1991 New Yorker essay exposed the anti-Semitic roots of much Quebec nationalism — the honor feels like a new chapter in Montreal’s relationship with its famous son.

“I’ve always felt that there’s been a softening of views towards my father’s positions as time passes,” Noah Richler said. “Younger generations feel less injured, they enjoy his work for what it is, and actually read it, as many of the hard-line Québecois indépendantistes who so loathed my father, did not.” Even the inclusion of French words on the mural, which might surprise some of Richler’s flock, makes sense to his son in context.

“I think it’s terrific, and fitting,” Richler said. “My father’s fury — which was daunting — was irked at the height of Québecois separatist politics because he felt his own Québecois nature was being denied. Canada was my father’s canvas. But above all, he loved Québec, he loved Montreal, he loved home.” The murals aren’t just intended as a tribute, though. “They’re also meant as education so that people can rediscover — or discover who this great person is, how they portrayed Montreal in their work, and how they made Montreal resonate throughout the world,” said Elizabeth-Ann Doyle, executive and creative director of MU, the mural-making non-profit whose mission is “transforming Montreal into an open-air museum.”

While Doyle believes Richler is the first Jewish Montrealer to be honored with a wall, she is planning a tribute to architecture doyenne and Seagram’s heiress Phyllis Lambert in 2017. Doyle’s organization didn’t consult with the Richler family about content, but did get the family’s blessing before proceeding with the mural project, including Florence Richler – Mordecai’s widow, and Noah’s mother.

The mural “exudes the spirit of Mordecai,” she told the Montreal Gazette at the wall’s inauguration. “He was no ordinary person.”