Why Jewish Critics Were Afraid of Edward Albee 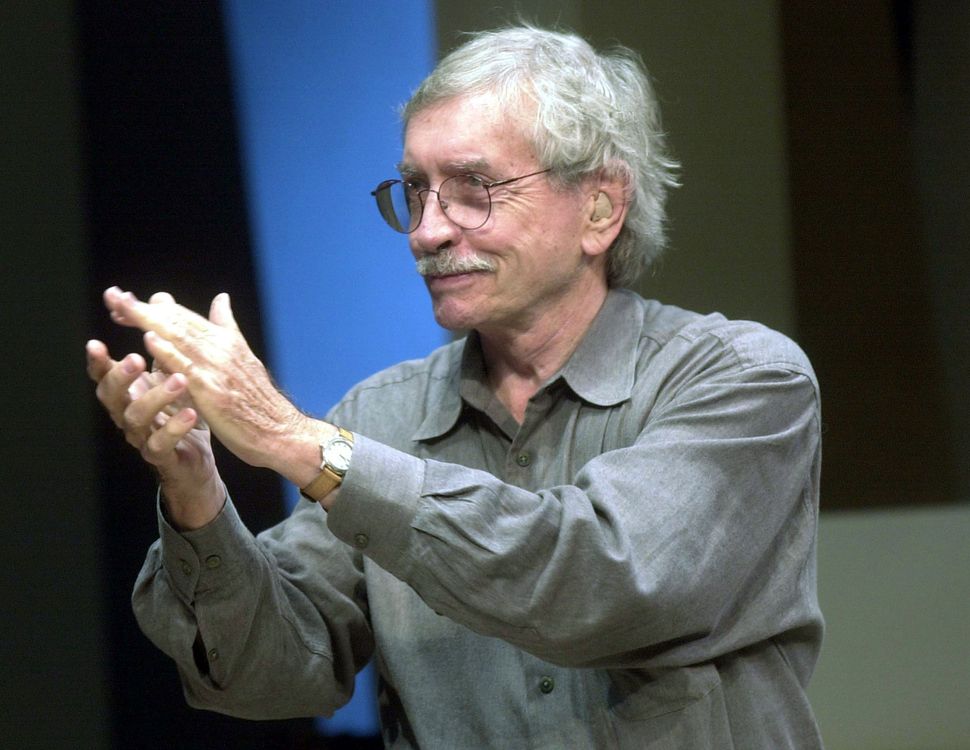 The playwright Edward Albee, who died on September 16 at age 88, is acclaimed today as the author of “The Zoo Story” (1958), “Who’s Afraid of Virginia Woolf?” (1962), and “A Delicate Balance” (1966). Yet decades ago, he was slated by a number of American Jewish writers, before ultimately being inspired by friendship with a Jewish artist.

In his earlier years, Albee was targeted by a flotilla of drama critics, all heterosexuals and most of them Jewish, who disliked his plays, deciding that they were failures because their author was gay. Robert Brustein, a noted critic, dismissed “The Zoo Story” for its “masochistic-homosexual perfume.” In 1961, “The New York Times’” chief drama critic Howard Taubman declared that in plays by gay writers, the “unpleasant female of the species is exaggerated into a fantastically consuming monster or an incredibly pathetic drab.” Taubman considered that plays expressing a “homosexual theme in heterosexual situations” to be “unhealthy” because the “audience sense rot at the drama’s core.” Some spectators falsely charged that “Virginia Woolf,” was really about two gay couples. Taubman returned to the theme in a follow-up article in the “Times,” instructing readers how to spot hidden gay messages in drama, for example the “hideous wife who makes a horror of the marriage relationship” or “scabrous innuendo about the normal male-female sexual relationship.”

Richard Schechner, now Professor of Performance Studies at the Tisch School of the Arts, New York University, faulted “Virginia Woolf” for its “morbidity and sexual perversity which are there only to titillate an impotent and homosexual theater audience.” Martin Gottfried, critic of “Women’s Wear Daily” concurred that the reason the protagonists of “Virginia Woolf” could not “have children is because they are really men — homosexuals… Is the running battle between George and Martha — and the kind of battle it is — a domestic conflict inherent in heterosexual or homosexual relationship?” In 1965, even Philip Roth produced a review of Albee’s “Tiny Alice” in “The New York Review of Books,” blaming the playwright for “ghastly pansy rhetoric and repartee” and demanding dramas “in which the homosexual hero is presented as a homosexual, and not disguised.”

The same year, Leslie Fiedler posited that “Virginia Woolf” offered the “relationship of two homosexuals (one in drag) as the model of contemporary marriage.” One of the most persistent of these naysayers was Stanley Kauffmann, who in 1966 as daily drama critic for “The New York Times,” wrote “Homosexual Drama and Its Disguises,” a screed explaining that gay playwrights were unable to express gay themes, and so crafted fake heterosexual situations in drama, resulting in a “badly distorted picture of American women, marriage, and society in general.” Kauffmann later presented his views as a plea to permit gay writers freedom of self-expression, but this is not how many readers, including Albee, interpreted his words.

In 1971 Albee informed “The New York Times”: “As for Martin Gottfried, I have a collection of letters from him in which he is absolutely hysterical about homosexuality — a gratuitous correspondence that clearly indicates he has hang-ups on the subject. If Gottfried is ever offered a job as critic on a responsible newspaper, I will see to it that those letters are published.” Years later he told the author Robin Bernstein that these early critiques amounted to the “usual prejudice. The antihomosexual critics. The Stanley Kauffmanns. Loathsome types like that. I thought that we should get together and get some Mafia type to shoot their knees off.” Eschewing violence, Albee decided to “go about [his] business” and continue writing.

Part of his business was being ferociously protective of his plays. One day, around 20 years ago in Paris, I was surprised by a phone call. “This is Edward Albee,” a gravelly voice stated. “James Merrill suggested I call you.” The playwright asked me to check a draft French translation of one of his plays for a new production. Albee confessed that his mastery of French was poor, but he had noticed that the translation began with a scene with a character on the telephone, not in the original play. I compared the two versions and after speaking to the French translator, informed Albee that for the upcoming Paris production, the theatre needed a longer running time, so the translator added a scene. Even over the phone, I could sense that a boom was about to be lowered, and soon afterwards, the Gallic production was cancelled.

Albee continued his work without holding public grudges and in 2008, “Occupant” opened off-Broadway. Originally intended to be performed by Anne Bancroft, who had died in 2005, the play comprises an interview with the American sculptor Louise Nevelson (1899–1988; born Leah Berliawsky of Ukrainian Jewish origin). Albee explained the title to “Playbill”:

“Even when she was in the hospital, dying, fame pursued [Nevelson]. People would see her name on her hospital room and go in and talk to her. Finally, she had the nurse take down her name and just put up the word ‘Occupant.’ I’m interested in how people create themselves. All artists do that. She was really quite a woman.”

He approvingly added to his biographer Mel Gussow: “She was always doing a performance. Nevelson in public was Nevelson in private, and even at home she never came downstairs without all the makeup.” In turn, the sculptor was inspired by a miniaturized house onstage in Albee’s play “Tiny Alice” and created a series of what she called dream houses based on it. In 1980, when the Whitney Museum presented a retrospective of Nevelson’s art, Albee wrote an introductory essay commenting on Nevelson’s creativity and implying closeness to his own universe:

“Nevelson feels that she began making her ‘worlds’ as an alternative space, so to speak—to create for herself a fathomable reality in the midst of the outside chaos. What has happened, of course, is that the private has become public, the refuge accessible to all, and, to those who know what a Nevelson looks like, the world is beginning to resemble her art. I hope she’s pleased.”

Why Jewish Critics Were Afraid of Edward Albee