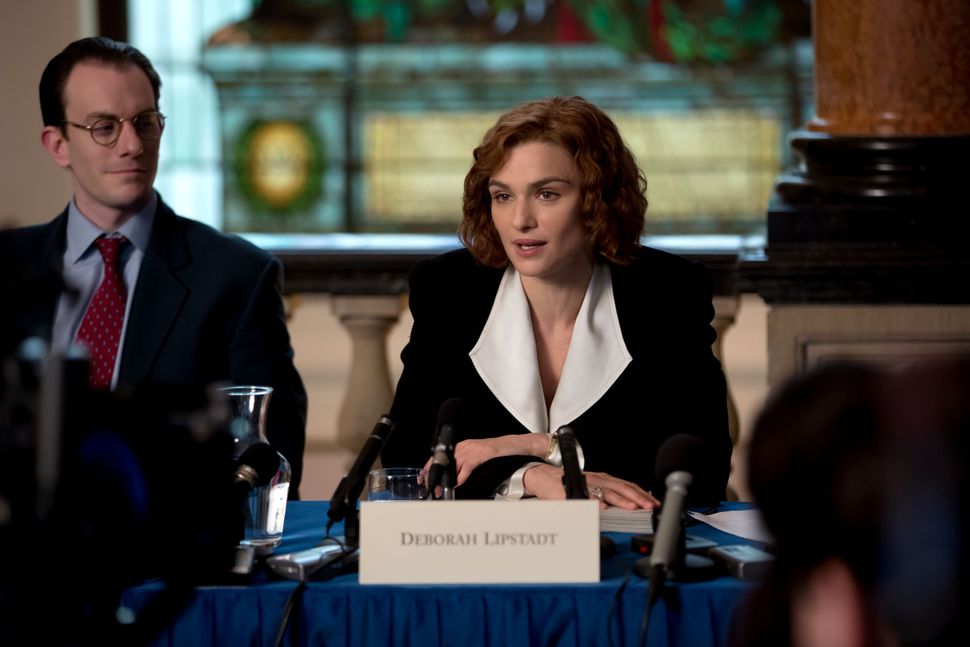 Rachel Weisz is in ‘Denial’ Image by Bleecker Street

I first met the historian Deborah Lipstadt years ago, when I was a foreign correspondent based in London. She was visiting the city, and a mutual friend suggested that she get in touch with me. I remember a spirited dinner at our flat, and a walk through Regent’s Park.

In the ensuing years, as she gained renown and as I began editing her columns for the Forward, I would often tell people that we met when she was in London working on her case against the World War II historian David Irving, who sued her for libel after she characterized him as “one of the most dangerous spokespersons for Holocaust denial.”

Only in preparing this essay did I realize my embarrassing mistake: Lipstadt’s “Denying the Holocaust,” in which she so critically described Irving, was published in 1993. He filed his libel suit in 1996. The trial didn’t end until 2000.

Sometimes, memory is not to be trusted.

The role of memory, and its fraught relationship to fact and truth, is threaded through Lipstadt’s legal battle with Irving, and so through “Denial,” the new film dramatizing that epic British courtroom struggle. The film debuted at the Toronto Film Festival and will open in select cities in the United States on September 30. Starring Rachel Weisz as Lipstadt, it’s based on Lipstadt’s book recounting her ordeal, “History on Trial: My Day in Court With a Holocaust Denier.”

Though in the end victorious, Lipstadt faced a legal saga that was filled with uncertainty and marked by intense loneliness. In the United Kingdom, the burden of proof in a libel case is on the accused, so it was up to Lipstadt and her British legal team to prove that Irving was wrong; that the Holocaust had, indeed, occurred, and that Jews were its intended victims. Lipstadt, then and today still a professor at Emory University, had put everything on the line to defend herself against the claims of a man who was driven by prejudice and anti-Semitism but also knew how to construct a cunning and cynical argument.

“History on Trial” was published in 2005, and it eerily resonates today. The rise of anti-Semitism in Europe and the surge of derogatory Holocaust-related tropes on social media perpetrated by extremists in this country raise a similar quandary: How do you deal with those who deny history, who disregard factual evidence, who seem to care little for the truth? And can this one film — a solid, interesting, at times gripping film, but one not destined for blockbuster status — help counter an ugly narrative?

The contemporary echoes were one reason that Weisz, whose parents fled from the Nazis, wanted the part. “Obviously, the Holocaust being on trial is just a very outlandish notion to me,” the British-born actress said during an interview in a Manhattan hotel. “But the idea that there are objective truths, and there is a difference between opinion and fact — in the current climate of relativism, people just spout opinions as if they are facts! There doesn’t seem to be much respect for the difference of the two things. So I thought it was fascinating to put something on trial and prove it was irrefutably a fact and that someone’s opinion didn’t stand up.”

She was drawn to the film for another reason, too: the opportunity to play a complicated, courageous woman. “You know, she’s difficult, she’s tough and she’s charming and she’s passionate and she’s tenacious and she’s funny and she’s bawdy,” Weisz told me. “And brilliant, you know, clearly.” 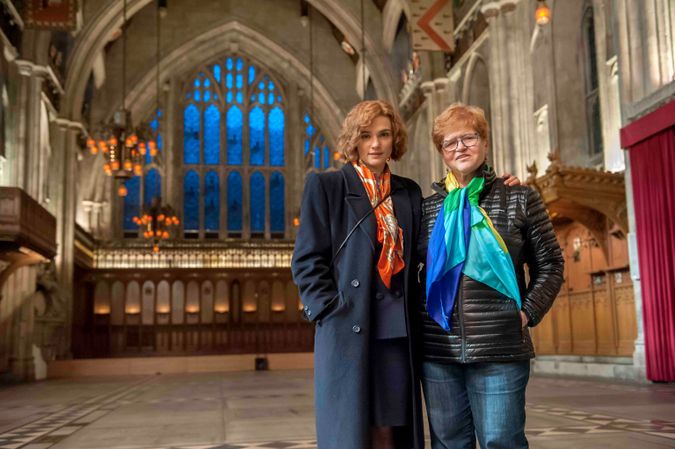 Actor and Muse: Rachel Weisz with Deborah Lipstadt, whom she portrays in the film ‘Denial.’ Image by Bleecker Street

Lipstadt — whose native Queens accent Weisz captures well in the film — is as surprised as anyone that her career as a historian became defined by her work on Holocaust denial. Her first book, “Beyond Belief,” which detailed how the American media downplayed or ignored the Holocaust while it was happening, had just been published when we did, indeed, meet in London. (I fact-checked this!) A few years later, she was asked to do some research on Holocaust deniers and thought it would be a diversion.

“I didn’t have a clue in the wildest depths of my imagination that it would change my academic career, put me on this stage,” she said. She talked with me by Skype from her hotel room in Toronto just before the film debuted.

Far from being harmless cranks, those like Irving, who insisted that the murder of 6 million Jews by the Nazis was really a hoax perpetrated by a powerful Zionist conspiracy, were gaining legitimacy in academic circles and beyond.

Irving’s outrages are strewn throughout “Denying the Holocaust” — everything from his admiration for Hitler to his dismissal of Anne Frank’s diary as a fake — but Lipstadt said that only through the painstaking research later done for the trial did she understand the depths of his denial. And his deep-seated prejudice.

In “History on Trial,” Lipstadt described the time when Richard Rampton, who argued her case in the British high court (and is played convincingly in the film by Tom Wilkinson), read aloud from a speech that Irving had delivered in Tampa, Florida, deriding what he called “professional survivors.” Irving mentioned a Mrs. Altman in Australia who once showed him the numbers seared onto her arm when she was imprisoned in Auschwitz.

“’But tell me one thing,’ and this is why I’m going to get tasteless with her, because you’ve got to get tasteless,” Irving said. “‘Mrs. Altman, how much money have you made out of that tattoo since 1945?’”

How do you counter that? Lipstadt’s legal team decided from the get-go to mount a defense that bypassed reliance on memory for demonstration of fact. And that meant keeping survivors from the witness stand.

The film creates a persistent dramatic tension out of that decision, with a survivor haunting Lipstadt in the courtroom, but as she herself has written, she was comfortable with the strategy from the start.

“The decision not to call survivors was the right one. It just allowed too much of a variable,” Lipstadt told me. “I carry around a green moleskin, writing little things to remind me, because memory is fickle. That’s one of the reasons we didn’t build a case on one memory, on one person’s story. Not that it’s not true, but because you can’t do that. What came out so strongly in the trial is the triangulation — documents, memories of prisoners, testimonies of perpetrators. We built an airtight case.”

But what if even cold, hard facts aren’t enough? The film opens with Lipstadt lecturing students about Holocaust denial and being interrupted by Irving — a perfectly snarling Timothy Spall — demanding that she debate him. She won’t. She won’t appear onstage with a denier. As Weisz described, “Her moral compass is such that she doesn’t feel like there is a debate to be had.”

I’m reminded of what Margaret Thatcher used to say as Britain’s prime minister when terrorists — in those days, largely the Irish Republican Army — disrupted her shores. Deny them “the oxygen of publicity,” she demanded of the media. Starve them of attention, which is what they really are seeking. 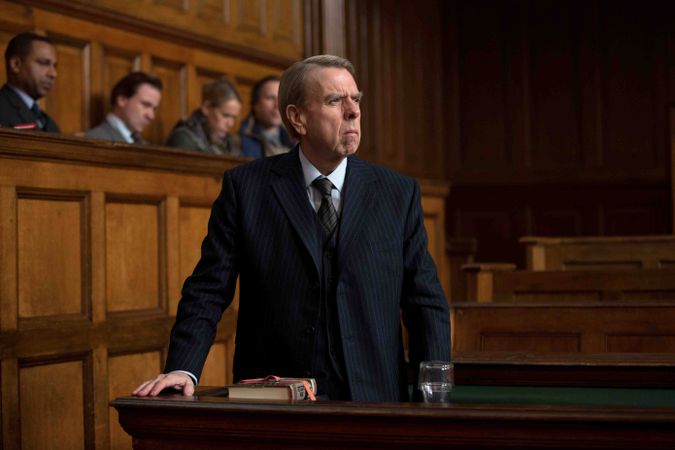 In theory, Lipstadt could have settled the suit with Irving, as she was urged to do by a few well-placed but spineless British Jews. (In her book, she acidly pondered what ought to be her bottom line in such a settlement: “Four million Jews murdered? Three million? One set of gas chambers?”) But let’s remember, Irving sued her, potentially depriving her of her livelihood and her right to free speech, and she had no choice but to challenge him, even though it meant we would still be talking about him today.

“We weren’t doing it for the publicity,” she explained. “We had a goal in mind: to hoist this guy on his petard, using his own words, own lies, own distortions. Through lots of serious research, we showed how there was nothing in what he said.”

I asked her if she thought all deniers and those contemptuous of fact and truth should be countered so aggressively. “Sometimes you have to take them on directly, sometimes you have to ignore them,” she replied. “There’s no hard-and-fast rule. You have to make a choice: When do I speak out and when do I shut up? The challenge is how you fight it without giving the person even more oxygen. You don’t engage in a rhetorical battle. You show where he or she is absolutely wrong.”

Sadly, in this age of Trump, even the truth seems to be an unconvincing defense. As I write this, a reader has sent me an image on Twitter showing one of Donald Trump’s sons with his finger on a switch to start a gas chamber with a Jewish journalist inside. The confluence of those who deny that the Holocaust happened and those who somehow think it should not have ended is one of the most curious and dangerous features of this presidential campaign.

Will “Denial” make a difference? “In the fight against anti-Semitism, in the fight against Holocaust denial, I hope this film will have an impact,” Lipstadt said. “But more, I hope it will remind people that certain things are true. And they’re facts.”