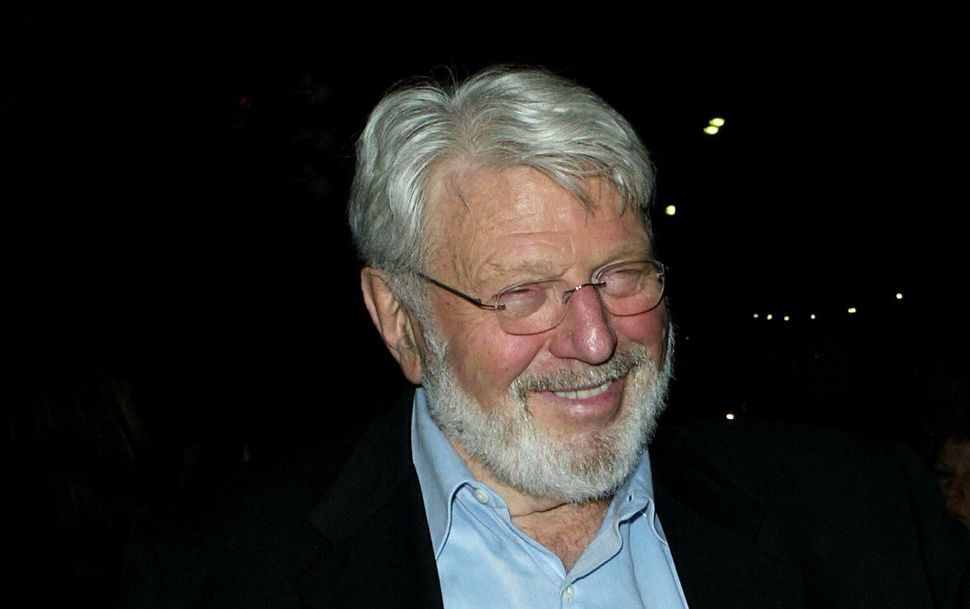 It’s been just a little over a year since Theodore Bikel died — he passed away a year ago July at age 91 — and as such, his legacy has yet to be cemented. This is undoubtedly due in part to the difficulty of encapsulating the legacy of a veritable Zelig – an Austrian-born Zionist pioneer who starred in such Broadway hits as “The Sound of Music” and “Fiddler on the Roof,” who sang in a black church in Alabama and at every civil rights and anti-war rally in Washington DC in the 1960s, who recorded albums of Russian and Anglo-Irish folk tunes, and who popularized Israeli folk music among Jews and Gentiles alike.

Bikel’s 70-plus year public career straddled disciplines including but not limited to serious actor, musical theater star, folksinger, activist, storyteller, songwriter, impresario, and labor leader. And within each of these disciplines, Bikel defied typecasting: he played hundreds of roles in film and on TV; his work as a folksinger included Russian, Irish, African, Israeli, Yiddish, and Appalachian tunes, as well as Negro spirituals and standards from the Great Folk Scare of the 1950s and early-‘60s; and his pet causes ranged from Zionism to civil rights to the antiwar movement to freedom for Soviet Jewry to equal rights for Palestinians – you name it, Bikel was there, literally, on the front lines.

Bikel had a hand in the creation of the venerable Newport Folk Festival; he opened a folk music club in Los Angeles; he was a mentor to up-and-coming folk stars including Judy Collins and Peter Yarrow (of Peter, Paul and Mary fame); and, of course, as much or more than Zero Mostel, he was everyman’s Tevye in the Broadway production of “Fiddler on the Roof,” playing the role for over 2,000 performances – more than anyone else, ever.

But his role as Tevye only came after he created the role of Austrian officer Captain von Trapp in the original Broadway staging of Rodgers and Hammerstein’s “The Sound of Music,” for which the composers specifically wrote the creepy anthem, “Edelweiss,” for Bikel to sing. The song was recently recycled as the opening sequence music for the alternative-history drama, “The Man in the High Castle,” an Amazon Original Series that imagined an America conquered by Nazi Germany after the Second World War.

But the tributes – which began well before his death, as his peers celebrated him on several occasions with awards and concerts – are beginning to surface, and as such will begin to create a version of Bikel that will be the one passed down to history, when the memories of those who knew him and of those who enjoyed his work as it was being created and produced are, how can I put this, gone like Bikel himself.

In the year leading up to his death, Bikel worked with fellow musicians and friends on a project meant as a kind of capsule summary of his career, a two-CD set called “While I’m Here” (presumably meant to suggest “While I’m Still Here”), capturing Bikel both as storyteller in spoken-word anecdotes presumably plucked from his memoir, “Theo: An Autobiography,” on one disk, and as folksinger on a 17-song career retrospective, spanning his early work in the 1950s to his final recordings made at a 90th birthday concert that took place in Los Angeles. The CD set, which includes a 22-page booklet with liner notes, interviews, and photos, is due out on Red House Records on September 16.

Additionally, tribute will be paid to Bikel in “Remembering Theo — An Evening of Music, Laughter and Love,” in the Sylvia and Danny Kaye Playhouse at Hunter College in Manhattan on September 27, featuring performers whose paths crossed with Bikel in one way or another, including Israeli folk-rock star David Broza; the aforementioned Peter Yarrow; Frank London and Lorin Sklamberg of the Klezmatics; klezmer musicians Deborah Strauss and Jeff Warschauer; Yiddish music revivalists Zalmen Mlotek and Hankus Netsky; and contemporary Yiddish singer-actor Daniel Kahn. Among the guest speakers will be Sheldon Harnick of “Fiddler on the Roof” fame; Bikel’s wife Aimee Ginsburg; and Rabbi Amichai Lau Lavie. Proceeds from the event will benefit the Theodore Bikel Fund for Peace and Social Justice, which is maintained by the organization Partners for a Progressive Israel, sponsor of the event.

Nowadays, Bikel’s emotive, ultra-sincere performance style, wholly lacking in irony or self-awareness, is ripe for satire — exactly the kind of thing that fueled the loving satire in Christopher Guest’s folk-music-revival mockumentary, “A Mighty Wind.” Indeed, Bikel’s updated version of the American folk song, “Wasn’t That a Mighty Day?” kicks off the album, almost begging the comparison.

But even at his most pompous and tendentious, there was something so genuine in Bikel’s personal stories and performances that made them endearing. Bikel seemed genuinely made for this stuff, as opposed to, say, his frequent concert pal Pete Seeger, who always seemed to be trying to keep one step ahead of his patrician upbringing, lest it undermine his credibility as the voice of the oppressed. Bikel and his family, after all, fled Vienna following the Anschluss, settling in what was then Palestine, and setting to work as pioneers – Bikel studied at the Mikve Yisrael agricultural school and joined Kibbutz Kfar HaMaccabi, before cofounding the Cameri Theatre.

Bikel retained the qualities of a halutz, a Zionist pioneer, throughout his life and career. It undoubtedly accounted in part for his being cast in a London staging of Tennessee Williams’s “Streetcar Named Desire” as an understudy for the roles of tough guys Stanley Kowalski and Mitch, as well as in countless other macho roles in plays, films, and TV shows including “The Defiant Ones,” “The Pride and the Passion,” “Wagon Train,” and “Gunsmoke.”

And while he brought a Hebrew tinge to his Yiddish, to his credit, at a time when most Jews and others had little use for the discarded folk music of Eastern Europe, in albums including “Yiddish Theatre and Folk Songs” and “Rise Up and Fight – Songs of Jewish Partisans,” Bikel played an essential role in documenting and perpetuating the Yiddish folk and theater song tradition. For that, if for nothing else, one celebrates the legacy of Theodore Bikel.

Seth Rogovoy is a contributing editor at the Forward and the author of “The Essential Klezmer” (Scribner, 2000). He is a recipient of a 2016 Simon Rockower Award from the American Jewish Press Association for excellence in arts and criticism.