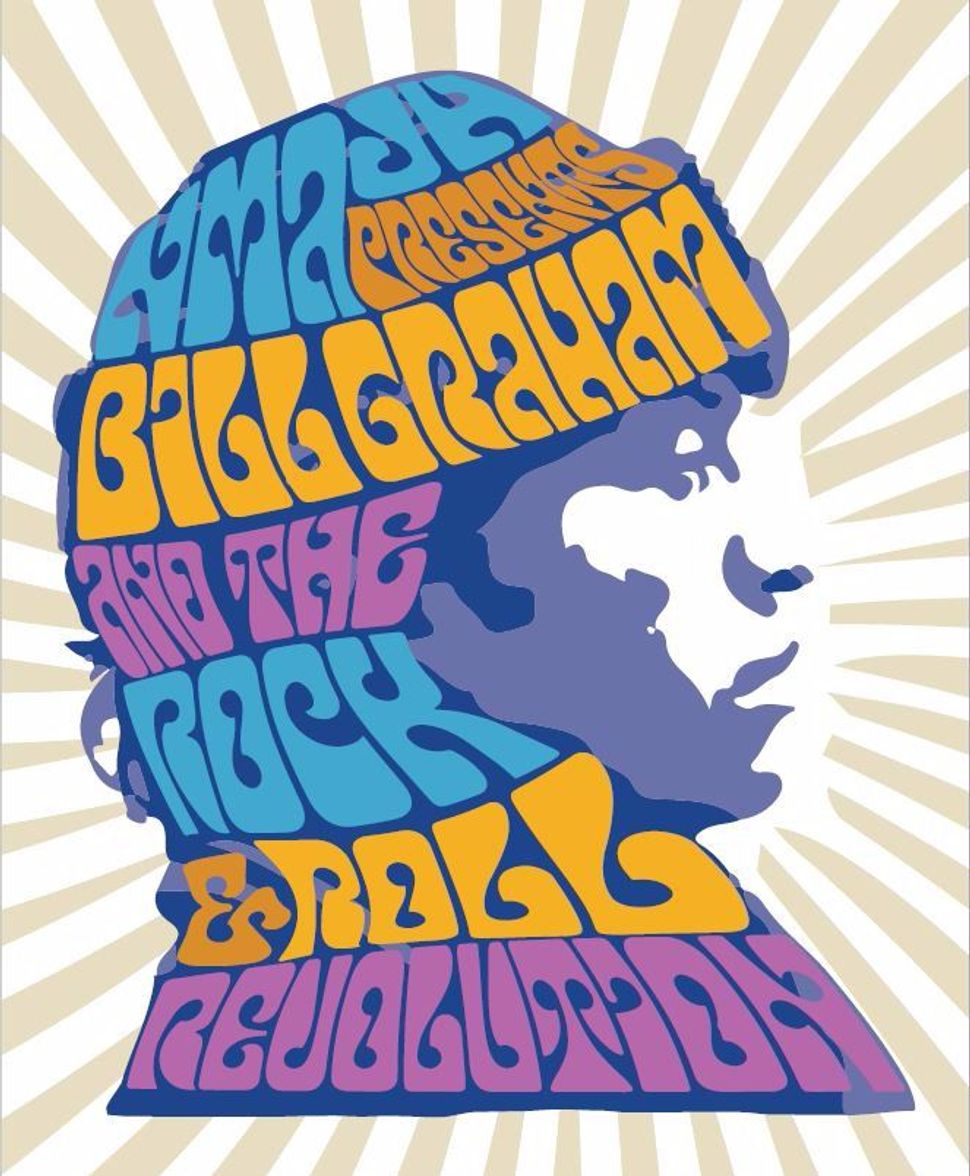 Image by Courtesy of NMAJH

Josh Perelman was away at summer camp in Wisconsin when the counselors made an unusual decision: They decided to let the campers watch television for one night, because Live Aid was on.

The event, a massive global fundraiser for Ethiopian famine relief, unfolded on two stages in July 1985, in London and Philadelphia. Dozens of acts spanning more than 16 combined hours included David Bowie, Queen, U2, Elton John and a Led Zeppelin reunion, amounting to what likely remains the most ambitious charitable rock concert ever.

The promoter behind the American production was Bill Graham, by then a music industry legend who had transformed the business of rock ’n’ roll beginning in the mid-1960s in San Francisco. His legacy, from the Summer of Love to his death in a helicopter crash in 1991, is revived in a traveling exhibition called “Bill Graham and the Rock & Roll Revolution.”

The National Museum of American Jewish History, the Smithsonian-affiliated institution on Philadelphia’s Independence Mall, is the latest museum to host the exhibit, which will head to the Illinois Holocaust Museum and Education Center next year.

Perelman, the former camper, is now chief curator and director of exhibitions and collections at NMAJH. He is eager to share Graham’s story with Philadelphia, where the memories of Live Aid still linger.

“The exhibit really fits quite squarely within the mission of our museum in that it explores history through the life of one individual, someone who came here seeking refuge and freedom,” Perelman said. “His investment in free speech and social justice — that’s a critical theme for this museum.”

Graham was born Wulf Wolodia Grajonca in Berlin, where his father died just after his birth. His mother placed her son and youngest daughter in an orphanage that sent them to France in an exchange program. His mother died at Auschwitz, and “Wolfgang,” as he was then known, became one of the One Thousand Children, the refugees from Nazi Germany who came, unaccompanied, to the United States before and during World War II.

Entering foster care in New York, the boy assumed a new name by picking the nearest one to Grajonca in the phone book. He served in the army in Korea, then worked in the Catskills in resorts before moving to San Francisco, where one of his sisters had settled.

For Erin Clancey, the curator behind the original Skirball Culture Center exhibition, one small, modest-looking artifact in the collection speaks volumes about Graham’s legacy: the hand-lettered flier from his first-ever promotion — a benefit for the radical San Francisco Mime Troupe, of which the leader had been arrested on obscenity charges. The event featured a young band called Jefferson Airplane, the satirical New York folk band the Fugs, the poet Lawrence Ferlinghetti and “Others Who Care.” The handbill on display in the exhibit is one of just two surviving copies, Clancey believes. “It was an impassioned plea toward protecting freedom of expression,” she said. “It was his very first concert, and he saw the potential. He immediately became ‘Bill Graham,’ the rock impresario.”

Graham soon began renting the Fillmore Auditorium, where he established a festival-style approach to concert bookings, pairing bands from the emerging psychedelic counterculture with jazz, blues and rhythm and blues greats — the Grateful Dead with Miles Davis, Buffalo Springfield with Muddy Waters. In later years he organized “The Last Waltz” of the Band, at Winterland, the US Festival (with Apple co-founder Steve Wozniak) and a series of Human Rights Now concerts for Amnesty International.

“He didn’t really have his own family, yet he could have a paternal relationship with 50,000 people,” said Graham’s son David Graham, an exhibit sponsor along with his brother, Alex Graham. “He really wrote the book on concerts — good sound, good lights. It sounds simple, but not everyone did that. He had a security force that was not going to give you a real hassle, and he treated artists with the utmost respect.”

David Graham, who has lived in Pennsylvania for years, is the product of Graham’s marriage to Bonnie MacLean, one of the original concert poster artists whose colorful freehand style defined the visual component of the classic rock years. Clancey especially likes MacLean’s poster for a week of shows at the Fillmore in July 1967, featuring the Doors and the Yardbirds.

I don’t know that we necessarily consider rock, or any music, to be a viable topic for a museum — by definition, it’s not a visual art,” Clancey said. “But of course, the unbelievable posters, that psychedelic art movement, there’s such a wealth of visual material.”

The idea for the exhibit originated with Skirball’s director, Robert Kirschner, the former San Francisco rabbi who presided over Graham’s memorial service.

“I don’t think he would’ve approached us if he didn’t feel it was the right place to be,” David Graham said. “Alex and I have always wanted to do something like this.”

While he has spent his life surrounded by the artifacts of rock history, he’s been moved by other pieces in the exhibition that tell another side of his father’s story. There’s a menorah and a touch-tone telephone, both charred, salvaged from a 1985 firebombing of Graham’s office after he organized protests against President Reagan’s visit to the Bitburg military cemetery.

For David Graham, the video testimony of the late Ralph Moratz, a childhood friend of his father’s, is especially meaningful. Moratz lived much of his life not realizing that the boy he knew as Wolfgang — they crossed the Atlantic and later attended summer camp together — would go on to become one of the country’s premier concert promoters.

“Dad never spoke to us about those years, or explained his feelings,” he said. “There were just a handful of kids who survived the trip.”

For Bill Graham, the trip had just begun.