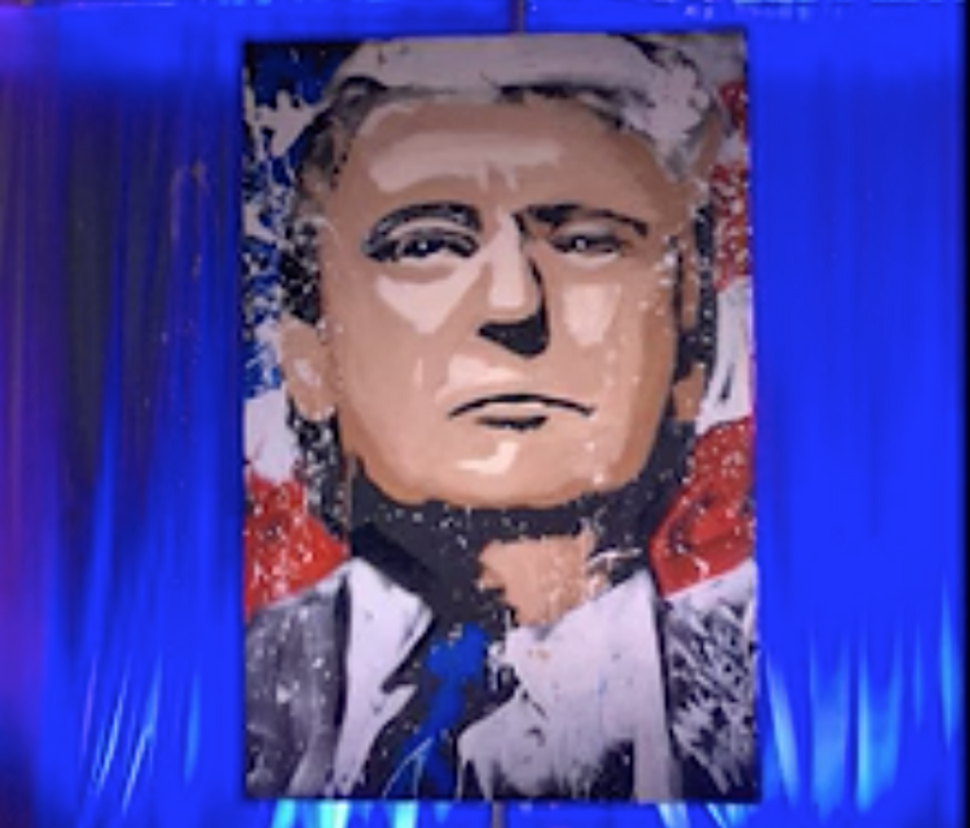 The speed-painter and “performer,” Michael Israel, recently found a creation he made 10 years ago at the forefront of a political controversy, involving of course, none other than Donald Trump.

Back in 2007, Trump and his wife Melania attended a charity hosted by HomeSafe, which helps homeless and abused children, at Mar-a-Lago, Trump’s private estate in Palm Beach.

In anticipation of the couple’s attendance, HomeSafe commissioned Israel to “live- paint” a portrait of Trump and then auction it off, which is how the artist usually operates and handles his works. Israel is regularly asked by non-profits and places like the JCC, AIPAC and synagogues to perform. He has painted such famous figures as Albert Einstein and Muhammad Ali, and is currently in talks with AIPAC about providing a painting for its national meeting in D.C.

His act includes such flair as spinning and flipping the canvas during the five to seven minutes it takes him to complete a painting. This way, the audience remains rapt as to whom the subject will turn out to be. When Israel turns the painting right side up, the crowd gasps, he said.

“By the time I’m done with my show, I’m in Never-Never-Land. Usually I leave the room for the auction and try to chill out,” he said.

But for some reason, he decided to stay while people bid on his Trump piece. Melanie put her paddle up at $10,000, and nobody tried to outbid her.

“Do you know what just happened? No one wants to bid against you and it’s only fair you should double your bid,” Israel recalled the auctioneer saying.

The painting sold for $20,000 to the Trumps. Afterward, Melanie approached Israel and critiqued him for not fine-tuning the painting and missing some nuances, like small details in the face.

Now, ten years later, the Trump painting has resurfaced to scandal. The Washington Post recently ran an investigation that found, among other things, the Trump Foundation purchased things “that seemed to benefit only Trump.”

According to the article, the Trump Foundation checked ‘no’ on its IRS form when asked if it had “furnish[ed] goods, services or facilities” to Trump or another of its officers?”

“Yes I admire Trump for his accomplishments. Trump is an icon. He is a part of American history. He is every bit the icon, as anyone I paint,” he said.