The 14 New Books You Should Be Reading This Fall 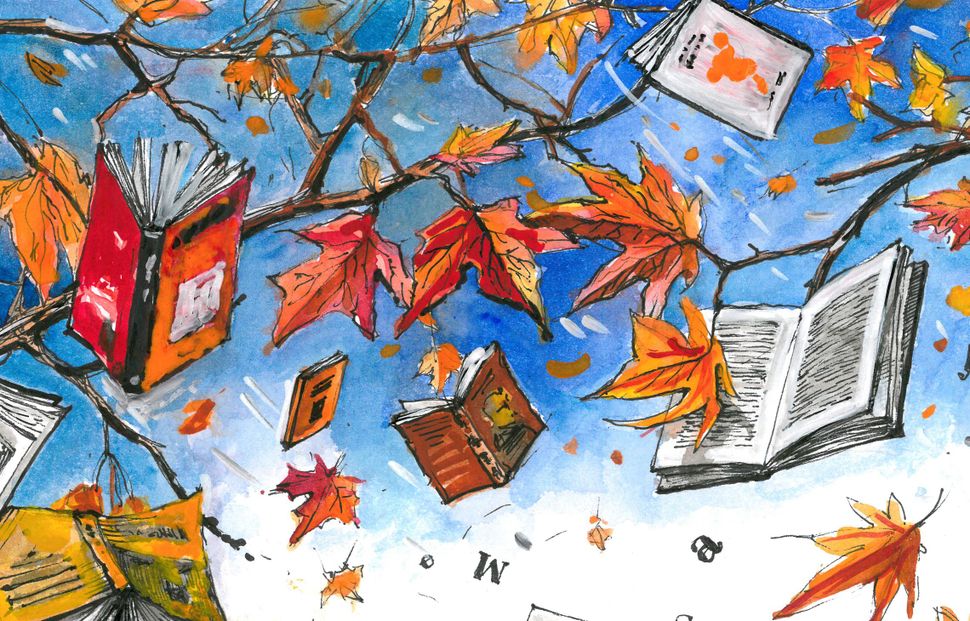 Cooler mornings; stray, amber-tinged leaves drifting romantically toward the sidewalk; a host of newspaper cartoons mocking an imminent flood of pumpkin-spiced baked goods and beverages — it must be fall! Call us biased, but we’ve always felt that the best way to celebrate autumn’s coziness is to curl up with a good book. Luckily, some great Jewish reads are on the way; candles, soup and scarves are optional.

In the first two pages of “Mischling,” twins Pearl and Stasha enter the world, in that order. First, though, Stasha narrates their time in the womb. “For eight months we were afloat in amniotic snowfall, two rosy mittens resting on the lining of our mother,” she says. It’s a passage that presages the book’s beauty and terror; written with a restrained, lovely magical realism, “Mischling” tells the story of the twins’ time in Josef Mengele’s lab in Auschwitz and of their painful journey after the camp’s liberation. This is Konar’s first novel, on which she worked for 10 years; it will leave you hoping the next one takes less time to arrive.

“Little Nothing”
by Marisa Silver

The three highly acclaimed previous novels by filmmaker-turned-novelist Silver have been rooted in her home state of California, making her choice of setting for “Little Nothing” — “an unnamed country at the beginning of the last century,” according to her publishers — an intriguing leap. “Little Nothing” follows Pavla, a beautiful girl born a dwarf, through her isolated childhood and her fraught, persecuted adulthood. The tale would sound relentlessly painful were it not for the tease of some fairylike brightness (rooted, like all fairy tales, in grimness).

“The Black Notebook”
by Patrick Modiano

Before Modiano won the 2014 Nobel Prize in literature, his work wasn’t well known in the English language. Lately, a flood of new translations of his work has become available in the United States. Next on the market is his 2012 novella, “The Black Notebook,” translated by Mark Polizzotti. Modiano tends to favor nontraditional narratives — in a 2015 New York Times profile of the writer, Rachel Donadio commented that his “books are like mystery novels, in which the search for information only creates more mysteries” — but his work is worth unraveling. “The Black Notebook” concerns a man revisiting a troubled love affair he had in Paris in the wake of the Algerian War of Independence, 50 years ago; it promises, in Modiano’s typical fashion, to reveal the truth about what happened, using a challenging, satisfying obliqueness.

Zink was nowhere, and then everywhere. Before forming an unexpected epistolary friendship with Jonathan Franzen in 2011, she wrote fiction prolifically, then either erased it or showed it to a single other person, usually her friend, Israeli novelist Avner Shats. Franzen half-prompted, half-goaded her into trying to publish — a moment of silence to appreciate the longing sighs of students everywhere with Master of Fine Arts degrees — and since her debut novel, “The Wallcreeper,” arrived in 2014, she’s been gaining steady acclaim. This fall she’ll release a new novel, “Nicotine,” but for those in the Jewish literature game, the collection of two early novellas she wrote for Shats, combined in the volume “Private Novelist,” is more tantalizing. The first, “Sailing Towards the Sunset by Avner Shats,” is a faux-translation that Zink composed of Shats’s novel “Lashut El Hashkia,” published in 1998. The catch? When she took on the translation, Zink, who isn’t Jewish, had only just started learning Hebrew. If you’re interested in questions of translation and authorship — is the novel just Zink’s, or in some ways, Shats’s too? — “Private Novelist” is the book for you.

Oz is one of Israel’s most significant novelists, and “Judas,” which arrives in the United States in a translation by Nicholas de Lange, is his first full-length work since the highly acclaimed “A Tale of Love and Darkness.” The latter recently received a film adaptation directed by Natalie Portman. The novel has lofty aspirations — its publishers bill it as, “At once an exquisite love story and a coming-of-age novel, an allegory for the state of Israel and for the biblical tale from which it draws its title” — but if anyone can realize them, it’s Oz.

Inspired by a visit Chabon made to his terminally ill grandfather in 1989, “Moonglow” tells the story of a large swathe of the 20th century through the eyes of a dying man. Chabon is perhaps best known for his historical masterpiece “The Amazing Adventures of Kavalier & Clay,” which brought the years before and during World War II to breathtakingly original life; we can only hope “Moonglow” will live up to its example.

Gottlieb, one of the most influential literary editors of the 20th century, has edited an A-list of authors ranging from Nora Ephron to John Cheever, headed the publishing houses of Simon & Schuster and Alfred A. Knopf, served as editor of The New Yorker, and written books about such cultural luminaries as George Balanchine and Sarah Bernhardt. In his first memoir, with a wry, gentle humor and a compelling sense of awe, he reflects on a life shaped by words. “I began as I would go on — reading,” the book begins; Gottlieb’s readers will want to follow his lead.

“Ethics in the Real World: 82 Brief Essays on Things That Matter”
by Peter Singer

Peter Singer is famous — and famously controversial — for a lot of reasons, among them, his argument that the idea of the sanctity of life is outdated and impractical, his advocacy for elevating the status of animals, and his dedication to effective altruism. In “Ethics in the Real World,” he addresses these issues, and many more, in a series of mostly digestible essays, many of which originally appeared in Singer’s monthly column for the news outlet Project Syndicate. Many won’t agree with what he has to say, but as he rightly points out, most academic philosophical work ends up in barely read peer-reviewed journals. Philosophy should be a more public endeavor, and Singer’s work is an excellent entry point. In a fall that will be shaped by a political contest in many ways detached from genuinely pressing moral issues, it might also serve as a refreshingly complex source of ethical questioning.

It’s been a big year for the notorious RBG; she’s become an even bigger pop culture hero, prompted intense political debate with her candidly unfriendly remarks about Donald Trump, and has become the namesake of a praying mantis. (You know, in addition to her work as a member of the United States Supreme Court.) The book, her first since she was appointed to the Supreme Court in 1993, is a collection of her writings and speeches; they range from a 1953 letter to the editor of The Cornell Daily Sun, titled “Wiretapping: Cure Worse Than Disease?” to 2009 remarks on the 1967 case Loving v. Virginia, which ended restrictions on interracial marriage. The collection shows off RBG as an intellectual powerhouse in and out of the courtroom, as well as a personable, funny, passionate advocate for feminism, the arts and the positive potential of the law.

“We Were the Future”
by Yael Neeman

Neeman’s memoir of her childhood on a kibbutz in the 1960s came out in Israel in 2011. It was the country’s best-selling book for weeks, won The Book Publishers Association of Israel’s Golden Book Award, and was nominated for the Sapir Prize for literature. Neeman, an accomplished editor and novelist, writes about her kibbutz childhood with an imagistic, spare insightfulness. The result, translated by Sondra Silverston, is a rarely intimate portrait of the unusual collaborative communities on which Israel was founded.

Yale University Press’s “Jewish Lives” series has brought us biographies of influential Jewish figures ancient and new, from King David to Marcel Proust. The series’ forthcoming installment on Moses, from Torah scholar Avivah Gottlieb Zornberg, promises to be intriguing. As Zornberg notes in her introduction, Moses’ religious, political and popular significance is so tremendous as to make it difficult to think of him as a real person. Her efforts to portray him as such required an unusual take on biography — the Torah is an unconventional primary source for the genre — and led her to consult supplementary texts from the Midrash to Martin Buber.

“Have I Got a Story for You: More Than a Century of Fiction From the Forward,”
edited by Ezra Glinter

Our humble paper, since its founding in 1897, has published some of the most prominent Jewish writers in Yiddish and English, including Isaac Bashevis Singer, Sholem Asch and the paper’s famous founding editor, Abraham Cahan. (Did I say humble? Oh, sorry.) Critic-at-large Ezra Glinter immersed himself in the Forward’s fiction archives and came out with a selection of stories that showcase the beauty, strangeness and difficulty of American Jewish life, from the early years of immigration to the era of postwar assimilation. Glinter has arranged the newly translated stories thematically, providing biographical information for each of the authors included. We’re about to plotz from pride.

“Trotsky in New York 1917: A Radical on the Eve of Revolution”
by Kenneth D. Ackerman

When your correspondent first took a job with the Forward, an acquaintance informed her gleefully of its history as a socialist rag. Well, here’s the proof: Only months prior to leading the Russian Revolution, Leon Trotsky lived briefly in New York City. Guess which scrappy Yiddish-language paper put his photo on its front page? Yes, this one. (We also published an interview with him, in which we broke the news that the Russian Jewish Trotsky barely knew Yiddish; it was a scandal.) This episode arrives early in Ackerman’s history of Trotsky’s stay in New York, and the Forward periodically crops up throughout the rest. We recognize that the book isn’t necessarily about us, but, well, gosh.

Heaviest Book of the Fall

This is not an objective category, but the Met Fifth Avenue’s catalog, for its exhibit “Jerusalem 1000-1400: Every People Under Heaven,” is as weighty as it is beautiful. Handsome on a coffee table; may break it.

The 14 New Books You Should Be Reading This Fall