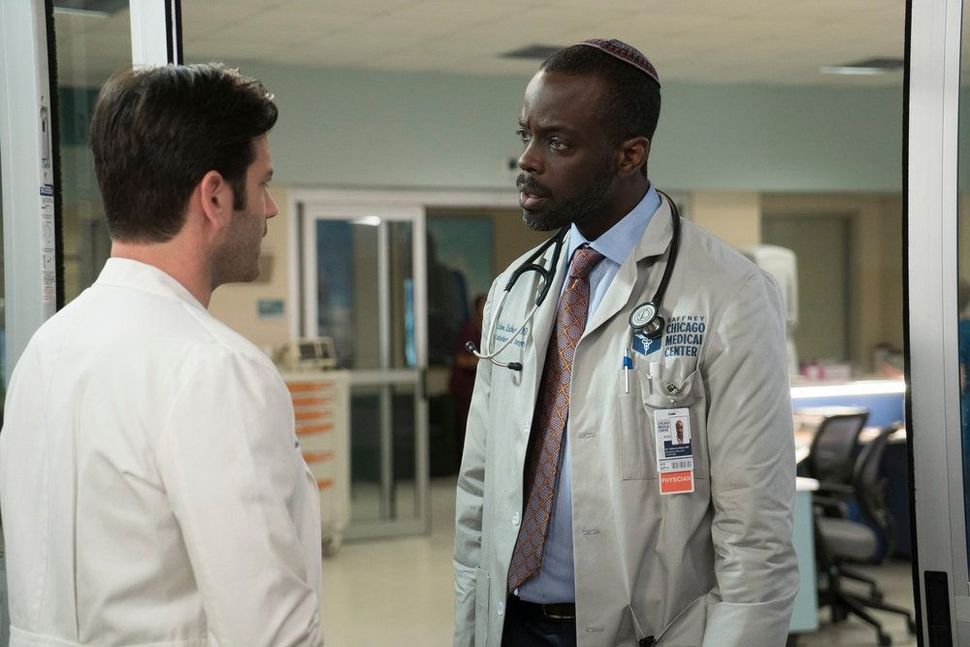 Fans of “Chicago Med,” which debuted last year, may have noticed a slight discrepancy in its casting. The major-city trauma center did not have a single Jewish doctor on staff. Jewish moms everywhere were aghast.

But, for season two, problem solved.

“We knew our young surgeon, Dr. Rhodes, needed a new teacher,” said Andrew Schneider who executive produces the show along with his wife Diane Frolov.

“We didn’t want the same [laid back] dynamic we had with Dr. Downey, so we started thinking about what kind of character and personality would make the relationship different,” explained Frolov.

“I came from a medical family,” said Schneider. “Both my parents were MDs in Los Angeles. It was a very secular Jewish family, but they had friends who were very religious, orthodox and I always found that interesting, the intersection of very devout Jewish observance with medicine.”

There was no single epiphany that transformed the orthodox Jew to an orthodox Jewish black man. “It just evolved,” Schneider said.

Judaism is not something Essandoh was totally unfamiliar with. His parents are from Ghana and met while students in the US. He grew up in a Jewish neighborhood in New Rochelle, NY. “All of my friends on the street we’re Jewish. I went to a lot of bar and bat mitzvahs. I even learned a little Hebrew.”

He went on to get a degree in chemical engineering from Cornell University, his father’s alma mater, and was planning on a career in that area when a woman intervened.

“My girlfriend at the time dared me to do a play at Cornell. She just saw something in me. I should send her residual checks, because as soon as I got on stage I was just stunned that people did this. That got stuck in my mind even after I graduated and started working. I took [acting] classes at night and broke my parents heart because of all the money they spent to put me through Cornell.”

Although the doctor uttered a brief Hebrew blessing over a patient in the premiere episode, viewers won’t see him perform any overtly religious acts.

But “we’re very respectful of his religious beliefs,” said Schneider. In an upcoming episode, he will have to come to the hospital on a Saturday to save a patient’s life. But “Chicago Med” does not have a Shabbos elevator and he won’t push the elevator button.