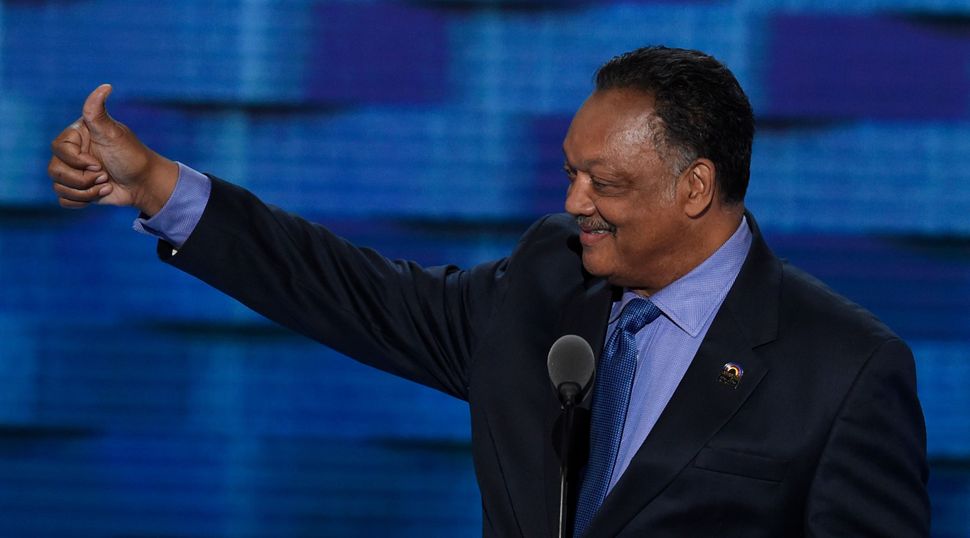 The Reverend Jesse Jackson, two-time presidential candidate, peace negotiator and founder of the Rainbow Coalition and Operation PUSH, has had a long, complicated history with the Jewish community. On the occasion of his 75th birthday, we look back at some of the highlights and the lowlights of that relationship.

1) In 1974, Jackson appeared as a panelist on the special Chicago television program, “So You Think You Know Chicago.” Jackson sat next to Chicago TV personality and columnist Irv Kupcinet and was quizzed by his longtime media nemesis Walter Jacobson who referred to Jackson here as the leader of “Organization PUSH.” In this somewhat cringe-inducing clip, Jacobson asks Jackson where the ice cream sundae was invented. “It’s not soul food, but try anyway,” Jacobson advises.

2) Speaking at a synagogue in Manchester, New Hampshire, Jackson admitted that he had, as was widely reported, referred to Jews as “Hymies.” It was “thoughtless but not in the spirit of meanness,” he asserted. Later, on “Saturday Night Live,” Eddie Murphy satirized Jackson’s remarks in song.

3) On the 1989 album “New York,” Lou Reed pilloried Jackson for consorting with the PLO and Nation of Islam leader Louis Farrakhan. “Jesse you say Common Ground/does that include the PLO?/What about people right here right now/Who fought for you not so long ago?” Reed sang in “Good Evening Mr. Waldheim.”

4) In 1988, Burlington, Vermont mayor Bernie Sanders endorsed Jesse Jackson’s second bid for the presidency. Jackson, said Sanders, was the sole candidate who was addressing the “unfair distribution of wealth and power in this country.”

6) While campaigning for president near the time of the 1988 New York primary, Jesse Jackson was called “a liar” and “unstable” by then-mayor Ed Koch who also asserted that any Jew would be “crazy” to vote for Jackson.

7) In 2000, during the run-up to the presidential election, Democratic vice-presidential candidate Joe Lieberman spoke fondly of a conversation he had with Jackson. “’You know, Joe, each time a barrier falls for one person, the doors of opportunity open wider for every other American.’” Lieberman was quoted as saying in reference to Jackson in The New York Times.

8) In 2008, while running for president, Barack Obama dismissed a quote attributed to Jackson in the New York Post that an Obama presidency would put an end to “Zionist control” in America.

9) In 2015, Jackson attempted to negotiate for the release of 13 Jews being held in Iran.