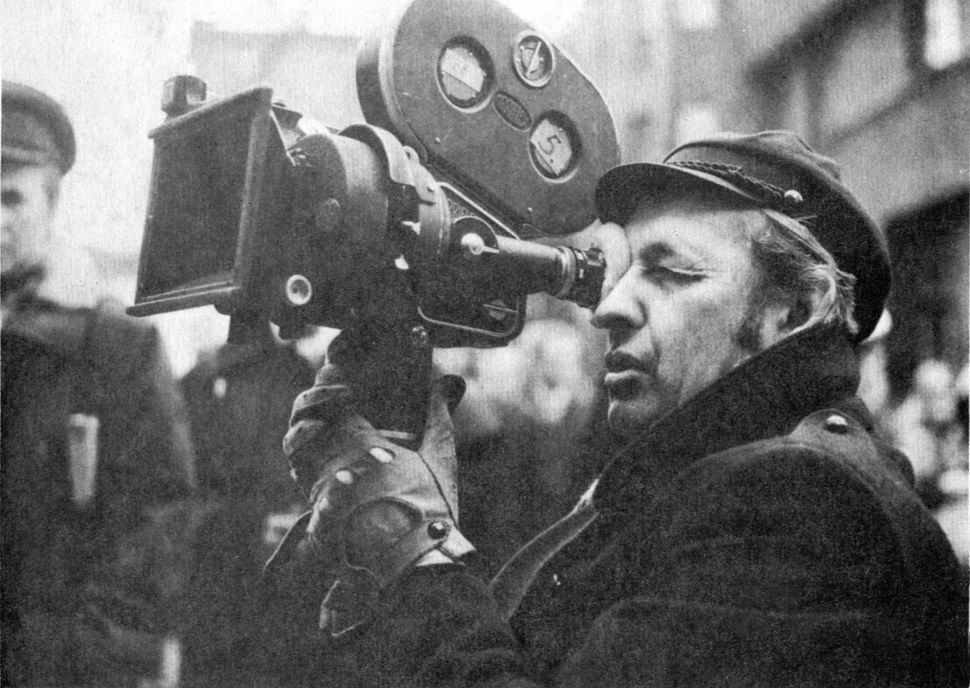 In his films, the Polish director Andrzej Wajda, who died on October 9 at age 90, relentlessly investigated history, particularly his homeland’s treatment of Jews. In Wajda’s films such as “Samson” (1961), “Landscape After Battle,” (1970), “Wedding” (1972), “Promised Land,” (1975), “Korczak,” (1990) “Holy Week” (1995) and “Pan Tadeusz” (1999), Jews are included as main or secondary characters. Wajda’s wartime experiences clearly influenced this artistic choice. When he was 14, his father was murdered by Stalin’s orders along with many thousands of other Polish intelligentsia in the Katyn massacre. For a half-century, the Soviet Union would blame the Nazis for this crime, perpetrated by the USSR. The undocumented disappearance of a generational elite was a lasting loss for Polish culture. At 16, Wajda joined the Polish resistance as a courier. On his website, Wajda reminisced:

“I could have been sent to Auschwitz; by a strange twist of fate it didn’t happen. I could have been arrested and sent to Germany as a slave laborer. I had a little luck, but this is a country where you actually have to find excuses for your luck. Because it is also true that all those who were braver, more determined, more desperate, more eager to take up arms, are mostly dead. And it must be said that these certainly were the best people.”

Whether the Jews in Wajda’s films are also the best people depends on the cinematic context. To be sure, Wajda’s confrontations with the historic past won him plaudits, from a 2007 Museum of Jewish Heritage film series, to an honorary Oscar for lifetime achievement in 2000. Presented by Jane Fonda, who awkwardly stated, “It is my privilege to prevent – present – this honorary Oscar to Andrzej Wajda,” the prize was proposed by, among others, Steven Spielberg. Wajda’s personal website reproduces a letter written in 1999 by Spielberg to the Motion Picture Academy president. Noting especially Wajda’s “Korczak” (1990), about Janusz Korczak (born Henryk Goldszmit, c.1878 – 1942), the Polish Jewish educator murdered with the children in his charge at Treblinka extermination camp, Spielberg terms it “one of the most important European pictures about the Holocaust…The example of Andrzej Wajda reminds all of us as filmmakers, that from time to time history might make profound and unexpected demands on our courage… that we might be required to put our careers at risk in order to defend the civic life of our people.”

The crystalline images in Wajda’s first black-and-white films are due in part to collaboration with gifted cinematographers, including Jerzy Lipman (1922-1983), a Jewish artist forced out of his country by anti-Semitism during the Polish 1968 political crisis. Film scholars such as Ewa Mazierska have pointed out that Wajda’s point of view has always been a specifically Polish Catholic one, which viewers from other traditions or contexts may find jarring, especially when dealing with the Holocaust. Mazierska, who teaches film at Manchester Metropolitan University, notes that objective details of historical accuracy were not the director’s primary goal:

“There is absolutely no difference in accent or pronunciation between the Polish spoken by Poles and Jews in Wajda’s films about the Holocaust. It is worth adding here that, in many films made both before and after the war, the manner of speaking was used as a principal means of distinguishing Polish and Jewish characters. Needless to say, Polish is the only language used by the characters; there are no traces of either Yiddish, which was used by the majority of working-class Polish Jews (two-thirds of those speaking Yiddish before the war lived in Poland) or Hebrew. Furthermore, there are practically no references to the religion of the majority of the Polish Jews—Judaism… Not only do the Jews in Wajda’s films hardly match the heroism of Polish characters, they rarely appreciate the sacrifices of Poles.”

Jews in Wajda’s films are solely identified by suffering because of their identity, rather than positive aspects. Polish people are shown heroically risking their lives to save Jews: “[Wajda’s] reasoning was that, in contrast to Jews, who suffered only physically and could not prevent their tragic fate, Poles suffered morally. By helping people from the ghetto, they risked their lives and the lives of their families, by doing nothing to rescue them they suffered the guilt and shame of those who welcomed the extermination of Jews.” These and Wajda’s other highly individual readings of history raised hackles, especially in France, where Claude Lanzmann, director of “Shoah,” attacked “Korczak” as anti-Semitic for presenting its protagonist as a saintly Polish Catholic. In “Korczak,” as in other Wajda films, some Jewish characters are shown as unappealing; rich Jews in Hasidic garb celebrate hedonistically while their brethren are starving to death nearby. This seems to indicate, Mazierska underlines, a “biased” view in Wajda’s films, that “good Jews are non-Jewish, the bad are faithful to the tradition.” In “The Promised Land” (1975), Lucy Zucker, the Jewish mistress of a Polish nobleman, demonstrates that having sex and devouring greasy food are not mutually exclusive activities. Aware of criticisms of the way this character was depicted, Wajda recut the film for rerelease in 2000 to make Lucy less repugnant.

Such concerns are soft-pedaled by fans of Wajda’s efforts to bring the Holocaust into public debate in Poland. As the Polish Jewish historian Adam Michnik observed in 2000,: “Wajda’s films never provoked ethnic hatred, never represented anti-Semitism with anything but revulsion. Only an exceptionally ill-willed person can direct an anti-Semitic accusation against Wajda.” Pointing to “Promised Land” in which Moritz Welt, a Jewish character, robs a friend, Michnik declares that capitalism was the intended target, not Jews. Indeed, Michnik observes that the film drew criticism from Communist authorities for “extol[ling] the virtues of Jews at the expense of Poles.” Agnieszka Holland, the director who wrote the screenplay of “Korczak,” likewise responded resoundingly in a letter to “Le Monde” in 2000 that by confronting anti-Semitism, Wajda “proved his courage and involvement several times (I know something about this, since he stood up for me when the communist anti-Semites did not allow me to work in Poland and tried to force me to emigrate to Israel…”

Still active until shortly before his death, Wajda recently completed “Afterimage,” this year’s Polish entry for the Oscar for foreign film. About a Polish artist’s struggles under Communist dictatorship, the film, Wajda told “The Hollywood Reporter” with Santayana-like perspicuity, is “universal and deeply significant… It is of crucial importance to remember about the sorrowful past in order to not repeat it in the future.”