Where Kabbalah and Mad Magazine Meet, Mark Podwal Is the Product 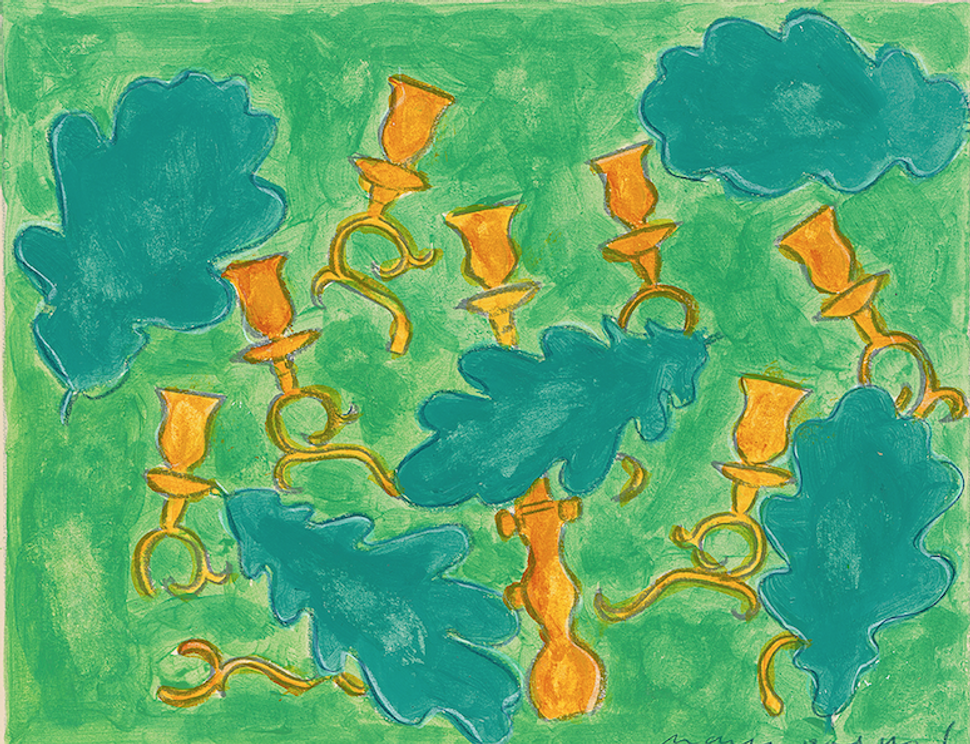 Dr. Mark Podwal is a Jewish artist. That is to say his art is his homeland and Judaism is the language of his country. Like body and soul they are intertwined. For many years he has been my friend and my family has used the Haggadah he illustrated with Elie Wiesel in 1993.

He began in the 1970’s drawing anti-Vietnam war images to accompany op-ed pieces in The New York Times but soon found creative nourishment in his Jewish experience. He then went on to create drawings and color prints that have now been collected in “Reimagined; 45 Years of Jewish Art,” a new book published by Glitterati Press. He is also the subject of a new exhibition at the Museum at Eldridge Street’s new Michael Weinstein Gallery.

I spoke with him in his medical office where the walls are covered with his latest prints. Sitting in his waiting room is a little like sitting inside the Jewish mind.

Anne Roiphe. Tell me how you became an artist.

Mark Podwal: I was always visual. But I began drawing when I was in medical school. I began with anti-Vietnam war drawings. Then when the French captured the Munich terrorist Abu Daoud, they released him after four days and I did a drawing of the Eiffel tower as an oil well.

Who are your artistic fathers.

How do you identify as a Jew. Are you Orthodox, Conservative or other?

I like things done the Orthodox way as long as other people are doing it. I am a Non-Observant Orthodox Jew.

That is a little like walking on your hands, don’t you think?

But Judaism forbids the making of graven images. How do you place yourself in the Jewish tradition ?

There are ancient synagogues in Israel that have mosaics of Biblical images with zodiac images. For centuries Jews lived in Muslim countries and under that influence they did not use visual images. Mohammed said, “Angels do not enter the houses where there are pictures or dogs.“ But I am a Jew who draws. When my textiles were dedicated in the Altschule synagogue in Prague I turned to the Rabbi and said, “I assure you I do not draw during the services.”

So many of your drawings are set in Prague. Can you tell me how Prague became so central to your work?

To me, Prague is a form of prayer. You can go to the Jewish cemetery. It has been there since 1745. You can see the actual old synagogues. So many Jewish artifacts have been saved there. In 1389 there was an Easter Pogrom in Prague and almost all of the community were massacred. Years later Rabbi Karo wrote an elegy describing the massacre. It is said that whenever Jews are murdered anywhere the walls of the Prague synagogue turn blood red.

Are you using Prague as a metaphor for the centuries-long often treacherous Jewish experience in Christian Europe?

Yes. Prague is my word for this history. Prague is great synagogues, beautiful prayers, but also the threat from the outside, the threat the Golem emerged to protect us from. Prague is where the Nazis gathered their Jewish stolen treasures to create a museum of the people they hoped to destroy forever.

How do you see the work you do connected to God?

The Kabbalah has influenced my imagery. There is a connection to the Jewish soul in the words of the mystics. I see the letters of the alphabet as fragments flying upwards, as part of the unknowable mystery.

What is the relationship between your art and your medical work.

I found at medical school I was better at looking at cells than listening to lungs. When I first started to draw for publication, the drawings arose from my doodling on the side of my Medical School notes. It took a while to use color.

So essentially you had no formal training.

That is right. I was always a great fan of Mad Magazine and that became a part of my way of drawing.

How do you balance your art work with your role as a doctor?

Where Kabbalah and Mad Magazine Meet, Mark Podwal Is the Product