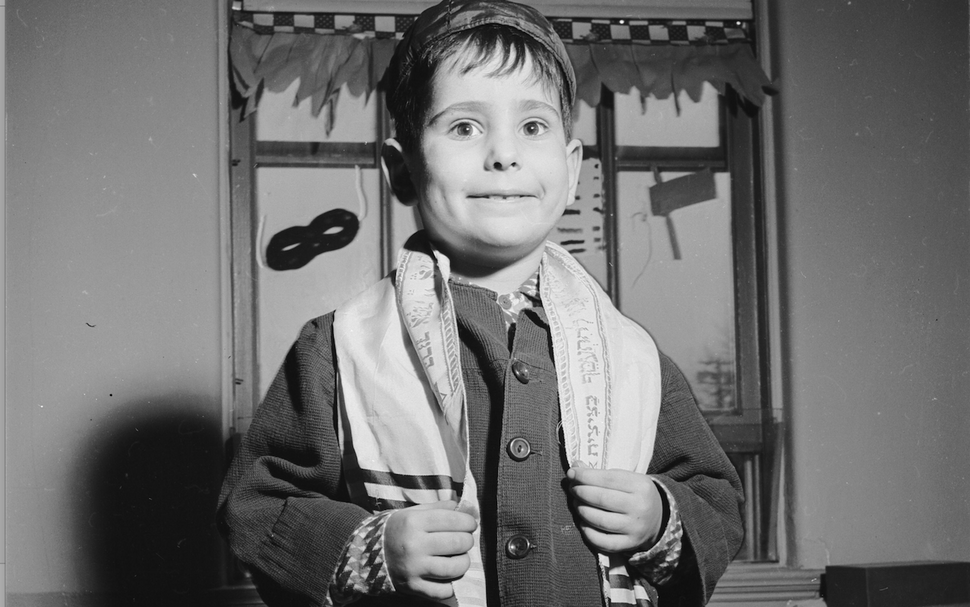 Funny how it takes a kerfuffle to get people thinking about what they wear, especially within the precincts of the sanctuary. In the wake of Donald Trump’s donning a prayer shawl, or tallit, while visiting an African-American church in September, I, like many of you, took to the Internet to learn more.

Was the wearing of a tallit a routine practice among the members of the Great Faith Ministries or a special gesture of welcome, I wondered. Alternatively, might it herald a new trend in interfaith relations, the sartorial equivalent of the Judeo-Christian heritage?

As I rooted around, I discovered that cross-cultural borrowings like this one are increasingly common, more the norm than the exception, within the ranks of evangelical churches eager to claim “biblically centered” practices as their own. Bishop Wayne Jackson, who invited Trump to share his pulpit, claimed there was nothing unusual or outré in placing a tallit around the presidential candidate’s shoulders. “You go to my church, you’ll see a lot of people with them,” he told reporters, adding that he has anywhere from five to 10 prayer shawls in his own closet. John Hagee of John Hagee Ministries has also been known to wear a prayer shawl. What’s more, his eponymous store sells them online.

Let’s also consider the Prayer Shawl Ministry, which was founded 18 years ago. Combining what it calls “feminist spirituality” with compassion and a “love of knitting/crocheting,” it offers a number of different pattern books from which to fashion a distinctive prayer shawl. By its lights, the religious garment is designed to “wrap, enfold, comfort, cover, give solace, mother, hug, shelter and beautify” the wearer.

Whatever its multiple functions, the prayer shawl, I learned — and in the pages of the Forward, no less — grew out of a form of streetwear popular in first-century Palestine. Known as a pallium, it developed into a distinctive Jewish form of apparel when rabbinically inclined Jews of the time affixed tassels to it. Later still, during the medieval period, it evolved even further into a religious garment to be worn only during prayer.

Fast-forward from antiquity to post-modern America, where the tallit continues to lead an interesting life, all the more when you factor in such elements as size and scale, fabrication and color. We don’t often relate Jewish history to such phenomena, preferring to think in terms of texts or geography, but well we should, for there’s much to be gleaned from the Jewish experience when we zero in on contemporary iterations of the tallit.

These days, sanctuaries are awash in color. The somber black and white of yesteryear’s tallit has given way to broad bands of purple and blue and to an array of fabrics that range from denim to lace. A far cry from the limp synthetic silk worn by an earlier generation of worshippers, the contemporary prayer shawl has heft and tends to be made of natural fibers such as wool, cotton and hemp rather than polyester.

It’s a rather sweeping affair, too. Years ago, most prayer shawls were skinny things, intended to be draped decorously around the neck and to stay put. Today, synagogue-goers seem to prefer ones that are big enough to envelop, and move with, the body and intensify the experience of prayer.

Increasingly handcrafted, artisanal and individualized rather than mass produced and standardized, the tallit has become a personal statement. Many tallit wearers have even taken to improvising an atara, a collar, out of Grandpa’s ties and Grandma’s hankies, or to embedding photographs of their ancestors within the prayer shawl’s folds.

Within Reform congregations, meanwhile, the tallit has made a comeback. Once banished from the sanctuary as an example of misplaced “fetishism,” and as an unduly Orientalized form of apparel, the prayer shawl has been reclaimed by a new generation of Reform Jews as an appropriate form of ritual attire.

By far the biggest and most significant difference between then and now is that the contemporary tallit adorns the shoulders of both men and women. For much of the 20th century, the sight of a woman clad in a prayer shawl would have occasioned a raised eyebrow in some congregations and a hullabaloo in others. Today, in most liberal synagogues (even occasionally in Modern Orthodox ones, as well), tallit-clad women fill the pews, a visible marker of their integration into the ritual sphere.

I don’t think I go too far when I say that the tallit reflects the zeitgeist. In a bid for respectability, earlier constellations of American Jews placed a premium on uniformity, on the neat and tidy and the decorous. A tallit that was at once contained and discreet, even meek, fit the bill perfectly, subduing the distinctiveness of the Jews without disavowing it altogether. That’s no longer our M.O. These days, we’re not only less inclined to hide our light under a bushel, as the old saw would have it, we’re also much more likely than our ancestors to place a premium on diversity, choice and individual expression. The variegated, oversized, colorful tallit we choose to wear proudly flags our identity as modern American Jews.