In Berlin, A Remembrance of Synagogues Past 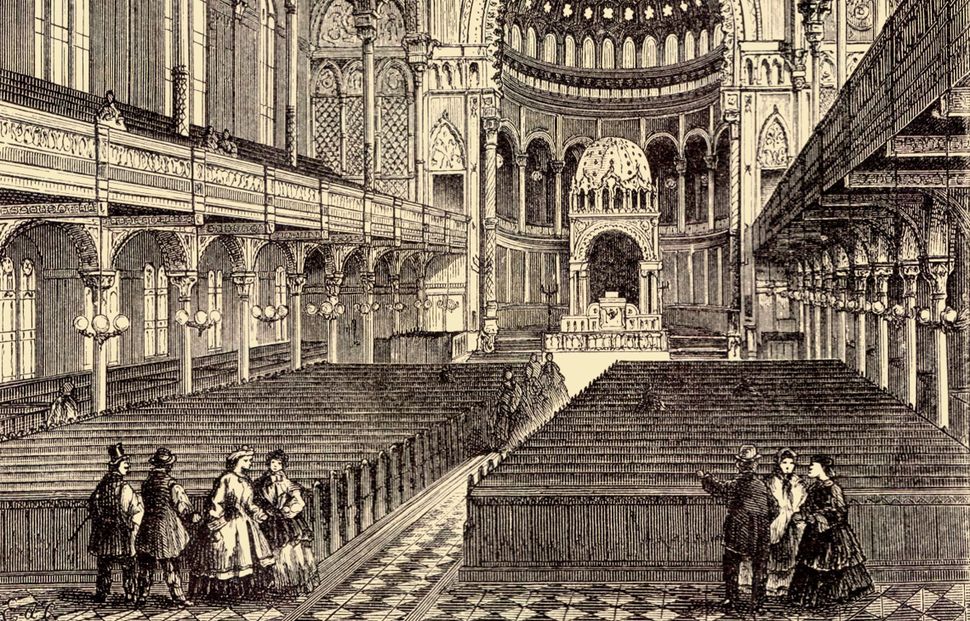 How do you take a walk down memory lane if you don’t have any memories of your own? That’s what I was asking myself on September 11 of this year, when the United States was commemorating the 15th anniversary of a great domestic tragedy and I was in Berlin, participating in yet another attempt to come to terms with an even earlier history.

To celebrate the 150th anniversary of its dedication, a day-long marathon of events took place at the Neue (’New’) Synagogue — or what’s left of it — on Oranienburgerstrasse in Berlin-Mitte. Aside from my having been endlessly drawn to Berlin since my first visit in 1963, I had an additional special reason for this trip: My two oldest grandchildren were going to be singing at the synagogue celebrations. This was just a tiny, perhaps irrelevant, aspect of a very public event, but I was excited at the prospect of having lived long enough to participate in some way.

When my 22-year-old grandfather moved to Berlin (from East Prussia) in 1870, he was part of a major migration of Jews, but not only Jews, who helped turn Berlin into a powerful European capital. All of my grandfather’s four brothers and one sister followed suit, and before long they were prospering in the lumber business. Eventually they brought their elderly shopkeeper parents to Berlin.

None of them seems to have assimilated (or converted), although my guess is that well over half of the descendants of these brothers are no longer Jewish. One remaining sister (Tante Sophie) married in Stettin, but after her husband ran away to America with the nanny, her brothers brought her to Berlin with her children, one of whom, Alfred Döblin, wrote the novel, “Berlin Alexanderplatz,” which embarrassed our bourgeois family with its raw characters. Most of these ancestors now lie buried in Berlin’s Jewish cemeteries Schönhauser Allée and Weissensee.

I doubt that my grandfather, Leopold (Jewish name: Lippmann), bothered to get himself a seat in the huge, impressive synagogue that was only 4 years old when he arrived in Berlin. He probably couldn’t have afforded it. But his diary records a range of interesting events. The young man enjoyed watching the Kaiser and Bismarck at the festive parade marking Germany’s victory at the end of the Franco-Prussian War in 1871. With a sense of hustling in the 1880s, he noted that the request for proposal for construction of the new Reichstag building required German oak (he specialized in foreign lumber and veneer); eventually, it seems, he persuaded the contractors to buy the wood from him. (So the 1933 Reichstag fire that provided the pretext for the dissolution of Weimar democracy also consumed my grandfather’s wood.) By the time of my father’s bar mitzvah in 1917, my grandparents were already attending the Neue Synagogue — albeit probably only on Rosh Hashanah and Yom Kippur. My grandfather seems to have cherished his seat in the synagogue — in his will he lists it as an item that my father is to inherit. My father probably sat there after his father’s death in 1926 until he moved to Stuttgart in 1932. (I still have the top hat he wore there for the High Holidays.)

An excellent historical introduction to the synagogue welcomes visitors to the Centrum Judaicum, now housed in the restored forecourt buildings of the Neue Synagogue. Having survived Kristallnacht, the actual sanctuary was damaged by Allied bombing and demolished in the 1950s. But its ghostly outline remains as a courtyard that gives a sense of the synagogue’s vast scale. The 150th anniversary celebrations took place in this outdoor space.

The paltry remains of the Neue Synagogue are quite impressive, and the glittering regilded dome is again one of the city’s landmarks. The liturgical music, however, may be the synagogue’s most lasting monument. An integral part of the “Liberale” liturgy, this musical mode of worship service survives primarily in two synagogues: one at Berlin’s Pestalozzistrasse and the other at London’s Belsize Park. Services are all in Hebrew and use music originally written for the great Berlin synagogue, primarily by Louis Lewandowski. Violating stricter Sabbath rules, the music is accompanied by an organ, and incorporates professional singers (often not Jewish).

The importance of this music to the service references the unifying congregational power of hymns in Protestant liturgy. It’s a familiar tradition that we encounter in Bach cantatas, often composed for special occasions. And it’s presumably meant to create a polite distance from the familiar hazanut of other Ashkenazi traditions. The music of Lewandowski, and his Viennese sort-of competitor, Salomon Sulzer, reflect much that sounds familiar (or schmaltzy?) about 19th-century European music.

In my youth, when classical American Reform Judaism was still clinging to its pretensions to look and feel Protestant, I was bought up on that kind of music at Buffalo’s Temple Beth Zion. Lewandowski and Sulzer music was standard fare in most American Reform synagogues in those days, presumably as a reminder of the composers’ German roots.

Other adaptations from classical music also crept into the liturgy. I still recall, long after I had left home, discovering that the melodious High Holiday “Ki ba’Yom ha’Zeh” our choir sang was really “Una Furtiva Lagrima” from Gaetano Donizetti’s “L’elisir D’amore.” Donizetti still courses through my brain every year in synagogue on Yom Kippur.

Tom Freudenheim is an art historian and retired museum director and art critic for the Wall Street Journal.

In Berlin, A Remembrance of Synagogues Past