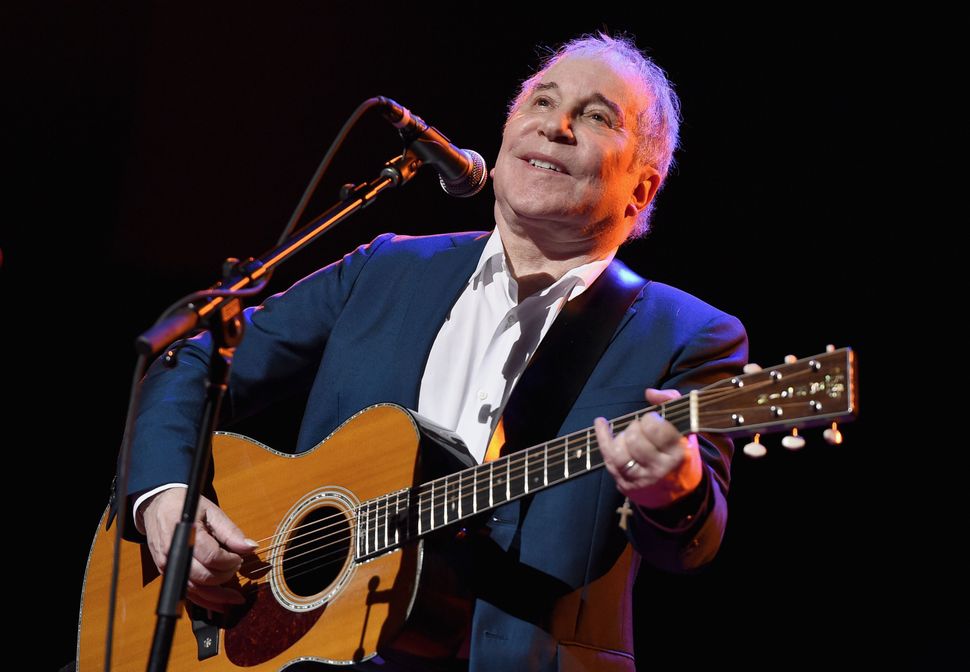 Modern klezmer music got its biggest boost in audience and record sales when, in the 1990s, classical violinist Itzhak Perlman rediscovered the music of his ancestors, got in touch with the leading lights of the revival, brought them with him to Poland to “find” the roots of the music, made a documentary, headlined an all-star concert at Lincoln Center, and took “In the Fiddler’s House” – a kind of rolling klezmer revue — on the road. Studio and live recordings followed, and klezmer leapt from nightclubs and auditoriums onto the stages of the top concert halls and festivals of the world.

It still wasn’t enough, however, to bring the music into the popular mainstream audience in any significant or lasting way. So back about 15 or 20 years ago, there was always this secret wish – what if Paul Simon “discovered” klezmer and did for the music of his ancestors what he had done so successfully for the music of Africa and Brazil with his landmark albums “Graceland” and “Rhythm of the Saints”?

Unlike his rarefied peers Bob Dylan and Leonard Cohen, however, Paul Simon never has made any overtly Jewish moves in his life and career – he never performed on Chabad telethons like the former nor hired a cantor and a male Jewish choir to record with him like the latter. Nor are his songs – with a very few exceptions – laden with references to Biblical stories and themes, nor are they cast in the prophetic mode that fuels so much of Dylan’s and Cohen’s work.

It’s not for lack of a background in a Jewish milieu, according to “Homeward Bound: The Life of Paul Simon,” by Peter Ames Carlin, out this week from Henry Holt and Company. While the new biography doesn’t focus particularly on Simon’s Jewishness — it rather offers a sweeping panorama of the singer-songwriter’s life story as it applies to his public career, favoring a psychological approach to understanding its subject’s lifelong conflicts, most notably with his singing partner, Art Garfunkel — it does provide a picture of a man struggling with the binary tensions of post-immigrant, postwar Jewish life in America.

Simon, who was born in Newark, N.J, in 1941 and raised in the Kew Gardens Hills section of Queens, N.Y. — what then amounted to a suburb — was named after his paternal grandfather, Paul Simon, who was born in Galicia in 1888. Like so many others of the time and place, the elder Simon fled poverty and pogroms for the promise of the New World, and he landed in New York City in 1903 at age 15. He got work as a tailor, got married, had children, including Paul Simon’s father, Louis, and moved his family to Newark, and continued to speak Yiddish at home.

Simon wrote a song called “Fakin’ It” in 1967, which was released as a single and just missed hitting Billboard’s Top 20. The production was very much in the style of the Beatles and other British Invasion bands of the time. The narrator sings, “I know I’m fakin’ it, I’m not really makin’ it…. This feeling of faking it, I still haven’t shaken it.” And then, in a reverie, he muses, “Prior to this lifetime, I surely was a tailor… I own the tailor’s face and hands.” Carlin, as have others, claims that it was only after Louis Simon heard the song that he told his son that he was named after his grandfather, the tailor Paul Simon.

Even though Louis Simon, performing as Lee Simms, was a working musician – a staff bassist with radio and TV orchestras and later on the leader of a prominent New York City society dance band – he always tried to dissuade his son from entering the family business When Paul was just a baby, his parents nicknamed him “Cardozo,” after Benjamin Cardozo, the second Jewish Supreme Court justice (Louis Brandeis was the first). Law school was their dream for young Paul, and even toward the end of the 1960s, when Simon & Garfunkel rivaled the Beatles in popularity and sales, his father still said to him, “Is that all you want? To be a rock star? Teach! Teach!… That’s the only important thing.”

Simon originally did set out to be a lawyer. Just two years after becoming bar mitzvah, Simon entered Queens College expecting to graduate and go on to law school. He already had tasted pop fame as one-half of the teen singing duo Tom and Jerry (he was Jerry), scoring a hit with his song, “Hey, Schoolgirl.” Tom was Art Garfunkel, his best friend who lived just a couple of blocks away, and while Simon went on to become a big man on campus as chapter president of the Jewish fraternity, Alpha Epsilon Pi, Garfunkel studied mathematics at Columbia University. (To this day, Garfunkel continues to teach math whenever he can.)

All throughout college, Simon continued writing songs and hawking them to publishers in Manhattan. He teamed up with a fellow Queens College student, Carol Klein, and the two worked as a duo, recorded simple demos of his songs as well as those of other non-performing songwriters. Klein herself was also a songwriter, one-half of a songwriting duo with her then-husband, Gerry Goffin, and writing under the assumed name Carole King.

Simon didn’t last long at Brooklyn Law School; it just wasn’t for him. He returned to songwriting, reinvented himself as a folkie (up until then he had been writing commercial pop tuned), gigged around London where he became a star on England’s significant folk scene, returned to the U.S. and reunited with his old singing partner, and the rest, of course, is history, and well laid out by Carlin, in all its fits and starts.

Simon and Garfunkel would go on to the heights of fame and wealth, but also endure a lifelong struggle with their love-hate relationship fueled on each side by jealousies and resentments. Carlin emphasizes throughout his biography how Simon’s insecurities over his voice, height, hair, and looks were only magnified by Garfunkel’s luck of the draw in all four areas. Of course, it was Simon’s songwriting abilities and his own considerable talent as a musician, arranger, producer and all-around musical visionary that made Simon probably the single-most commercially successful singer-songwriter of all time.

But even having achieved that status, Simon has always worked in the shadow of his sometime-friend, mostly rival, Bob Dylan, as the greatest songwriter of the era, only further feeding his insecurities, which, fortunately, haven’t stopped him from continuing to attract crowds to his concerts and produce great albums well into his 70s. If not quite a prophet along the lines of Leonard Cohen or Bob Dylan, he certainly has secured himself a place in the pantheon. Of that, he needn’t be insecure.

Seth Rogovoy is a contributing editor to the Forward and the author of “Bob Dylan: Prophet Mystic Poet” (Scribner, 2009). He is a recipient of a 2016 Simon Rockower Award from the American Jewish Press Association for excellence in arts and criticism