Did Radical Politics Undercut the Work of This Brilliant Photographer? 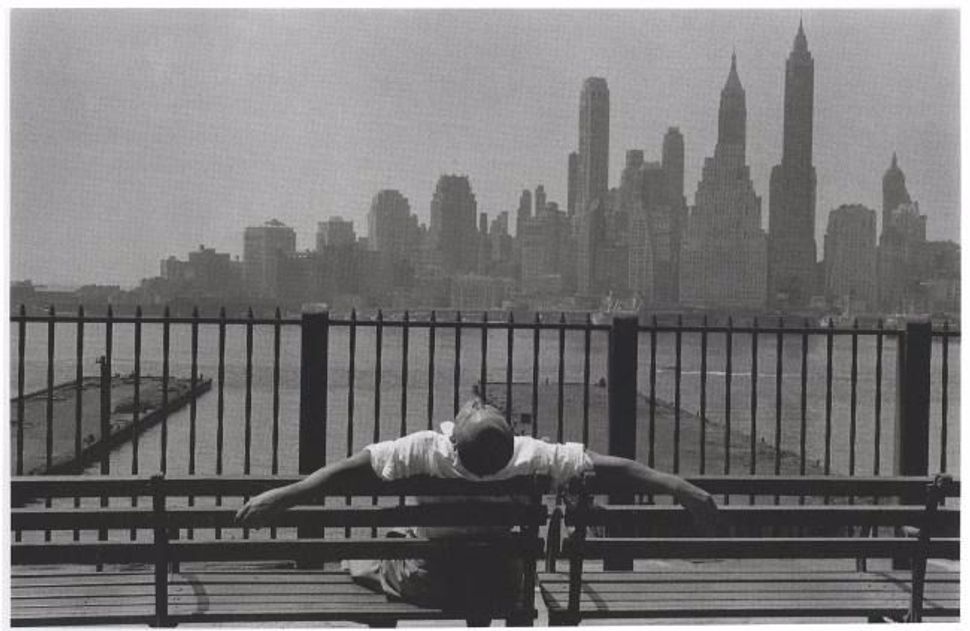 Louis Stettner, the American Jewish photographer who died on October 13 at age 93, produced images governed by Socialist ideals to the point where a full understanding of his creative personality requires looking at his works in other media. After early inspiration to take up photography by encounters with such talents as Alfred Steiglitz and Paul Strand, Stettner’s artistic trajectory was interrupted by service in the Second World War. Surviving duty as a combat photographer, he studied with Sid Grossman (1913–1955) as a member of the Photo League, a socially conscious photographers’ cooperative which Grossman founded with Sol Libsohn (1914-2001). There, as Stettner would write in the catalogue of a 2016 French museum exhibit of his work, his photographs of workers were “directly connected with my political commitment. I am a Marxist. I am aware of class identity.”

Stettner would later recall that Grossman’s credo was that the “photographer was not a law unto himself, but rather, a responsible social being, with obligations not only to subject matter, but to the people engaged in the mass struggles of our time… While [Photo League members] extolled photography as the art form of the twentieth century, they did not see it as an isolated medium, but one enriched and broadened by social and political involvement.”
For a time, Stettner’s fellow Photo League members concurred, including Ruth Orkin, Rebecca Lepkoff, Walter Rosenblum, Eliot Elisofon, Morris Engel, Jerome Liebling, Aaron Siskind, Dan Weiner, and Lou Bernstein. Eventually the Photo League ran afoul of the rising wave of McCarthyism in America. As Stettner told “Women’s Wear Daily” earlier this year, he had been working for the post-war Marshall Plan as a photographer, and investigators asked if he knew any Communists. He replied: “It’s not for me to say what someone else’s political views are,” and was duly fired. Stettner added: “I think the world is a better place for Socialism having existed, and I have no regrets at all about that.”

Nowhere is Stettner’s socially conscious approach more evident than in his Bowery series, showing downtrodden Lower East Side denizens in tight close-ups like celebrity portraits. The empathy and charm radiating from these images says much about Stettner’s goals, favouring hamish interaction to unrelenting formal investigation. Stettner was far from the stark, if exultant, imagery of Weegee, the professional name of Arthur Fellig (1899-1968), a photojournalist born in Ukraine. To his credit, Stettner appreciated the work of Weegee, whom he met the Photo League. There, the legendary tabloid photographer was an odd man out, considered lacking in social conscience and sensitivity about his subjects. Weegee’s power as a photographer derived from his gleeful zest for the grotesque; humanism and compassion were of less importance to him. Perhaps for this reason, Weegee’s images are unsentimental and their point of view does not date. Stettner’s own photographic work is aspirational; his grandly titled “Soul of New York, 23rd Street – 1951,” shows an unassuming African-American man leaning on a lamppost next to a trashcan. There is nothing specifically soulful in the image, apart from its title, likely just a reference to the term “soul brother.” In his introduction to a 1977 collection of Weegee’s images, Stettner offers the puritanical reflection:

“One cannot pore over the vast numbers of kaleidoscopic and distorted nudes without realizing that Weegee was working out his sexual fantasies through photography. While some of them have genuine artistic merit, lending insight into the male concept of female sexuality, the rest of these photographs were of purely therapeutic value to Weegee himself.”

In Stettner’s images of store window mannequins circa 1946, he coolly shows awareness of the Surrealist tradition of eroticizing inanimate objects, as in the series of dolls by Hans Bellmer. Long a resident of France, he was on friendly terms with the Hungarian–French photographer Brassaï, noted for his exuberant images of Parisian nightlife. Yet Stettner felt too much respect for his subjects to show them in the monstrous forms that Brassaï or Weegee created. Instead, Stettner absorbed the gentle populist tradition of French street photography, exemplified by Robert Doisneau and Willy Ronis, to the point where some early Stettner images are almost indistinguishable from the polite, reticent style of Doisneau or Ronis. Stettner was also friendly with Israëlis Bidermanas (1911–1980), the Lithuanian-Jewish photographer who signed his images Izis, but Stettner’s photographs generally did not reproduce the energy or fearless dramatic flair of Izis in terms of composition or expressions of his sitters. Possibly restrained by socially consciousness, Stettner instead imitated predecessors such as the American photographer Walker Evans, who from 1938 to 1941 took candid shots of unsuspecting subway riders in New York City. Stettner followed this example diligently, but his results from 1946, although monumental, are less extreme, more nurturing in their humanism.

Aware of the strictures of social realism in photography, during his long and productive artistic life Stettner found freedom in other media. There is a sense of liberation in his sculptures, which he developed with advice from Ossip Zadkine (1890 –1967), born Yossel Aronovich Tsadkin in Vitsebsk. Zadkine’s typical sharp angles may have inspired Stettner to explore far-fetched distortions, so that his sculpted faces in bronze provide a welcome antidote to the ever-respectful imagery of the working classes captured by his camera lens. Likewise, Stettner’s paintings, akin to Fernand Léger on mescaline, reveal an uninhibited, sometimes frankly eroticized world in electric colors. These images, minus Marxism and social class consciousness, have yet to be fully celebrated by the public who justly admires his many decades of photographic achievement.

Did Radical Politics Undercut the Work of This Brilliant Photographer?