Getting Out of Gaza Was the Easy Part 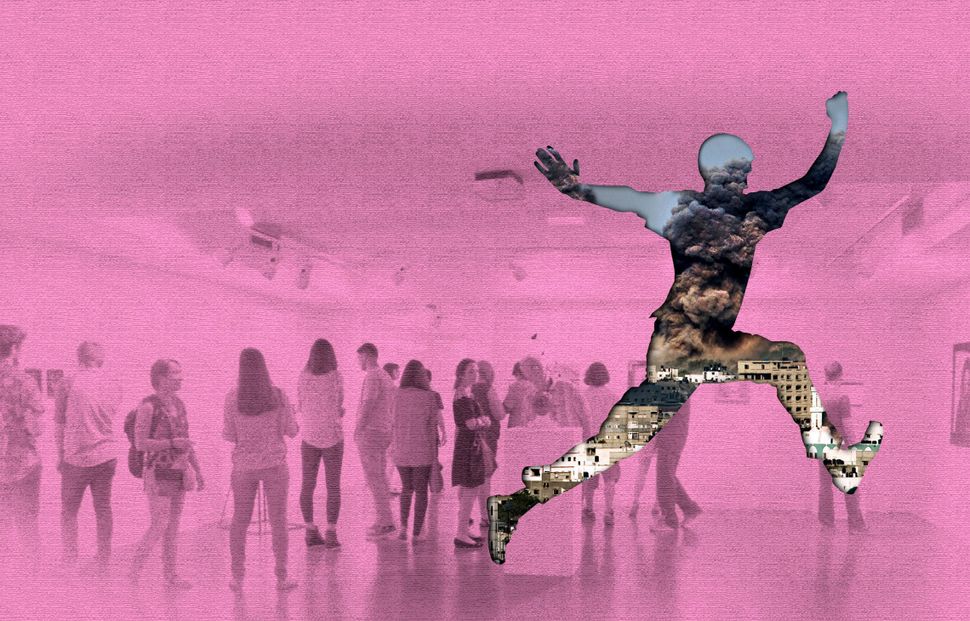 I have never seen strangeness like this. In a quiet, upscale neighborhood of Jerusalem, my husband, Judah, and I were at an Israeli friend’s exhibit. Michal is a fashion designer. She is from a town in the north of Israel, the type of town with large suburban houses carved into hillsides blooming with fruit trees. It’s the type of town that produces Israel’s real elite. Kids here are born to excel: If they dance they dance for Batsheva; if they like physics they become aerospace engineers for Israel’s defense industry, or pilots in the Air Force.

In the summer of 2014, during the war in Gaza, Michal, like many others, felt frustrated and helpless. The conflict was all consuming, but she did not want to be defined by it. Her thought was to reach out to an artist on the other side of the battle lines. Searching online, she identified a Palestinian architect in Gaza who shares similar artistic sensibilities. The two began collaborating, communicating in English over Skype and producing work digitally. In time they became good friends. They named their collaboration “Bridging.”

I had seen “Bridging” several times, and didn’t plan to go to the exhibit in the villa. But on the morning of the opening, Michal called, excited. Ali, her artistic partner, had made it out of Gaza; he’d be at the exhibit opening that evening. This would be their first time meeting in person. Since Hamas took over Gaza in 2007, Gaza has been on lockdown. In addition, because of the blockade, and Hamas’s corrupt rule, there are housing, electricity and other shortages that leave many residents, including Ali’s family, living in desperate conditions.

Somehow, Ali had managed to arrange an interview for a visa at the U.S. Consulate in Jerusalem. He had been notified that morning that he had been granted permission to enter Israel and to travel to the interview the same day. The permit expired at 7:00 p.m. It was the same day as the exhibit opening, but the opening would begin only at 7:00 p.m. Nevertheless, Ali said he’d be there. He was packing a bag and would never return to Gaza. Anything was preferable to going back.

My husband and I arrived at Villa Sherover and immediately chanced upon Ali in a narrow hallway. He was small but looked as if he wanted to be even smaller. He wore bright-blue stonewashed jeans and a crisp white button-down shirt that was tight and thin. Underneath he wore a visible white ribbed muscle shirt, though he had no muscle. His face was smooth and clean shaven. His black hair was spiked and slicked, almost wet, with hair gel.

I smiled and said: “It’s so nice to meet you. I’ve heard so much about you.” He smiled back only slightly, and murmured “It’s nice to meet you” in a strongly guttural Palestinian accent. His eyes were distant, like those of the shyest boy you’ve ever met.

“How was your trip?” I asked Ali. He replied “Okay,” but his face betrayed strong discomfort.

Suddenly the villa went dark. The loud live band playing on the roof went silent. Was this a sign of an impending attack? It turned out that it was a blown fuse — the house hadn’t seen this much electricity use in decades, if ever. The lights came back on, and Ali seemed slightly loosened up. “Power losses happen all of the time here, too? I didn’t know that,” he said. I went my way in the house and he went another. At first he went from one corner of the room to another while Michal stood in the center, chatting with enthusiastic visitors. But as the evening wore on, he slowly made his way to standing alongside Michal, and the two of them engaged with visitors together.

Privately, I asked Michal how it was to finally meet Ali. She felt like she was at her own surprise party, she said — shocked, touched, but totally unprepared. Mostly, she felt relieved that Ali was finally out of Gaza. I asked what Ali was going to do, whether she felt responsible for his well-being in Israel. Her family had assured her that she was not responsible, but she felt she was. Judah and I left the exhibit late, maybe 11:30 p.m. While on the road, Michal texted, in capital letters, “URGENT.” That afternoon, she had asked the curators of Design Week to book a hotel room for Ali. They said they would, but for whatever reason they hadn’t. She needed to find him a room ASAP. Did I have any ideas? What kind of ideas? He couldn’t just walk into any hotel; hotels in Israel require a passport at check-in.

Michal didn’t feel comfortable asking any of her friends or family to host Ali for the night. She feared it might be illegal, and she might be putting them in danger.

In the end, Ali stayed the night in Tel Aviv with a friend of a friend. That friend was hosting a party, and Ali stayed up to the wee hours, hanging out and having a good time. When he woke the next morning and walked outside in the sun to buy coffee, he had a panic attack. He couldn’t stay in Israel; he felt too frightened that he’d be detected. He called a relative in the West Bank and left that morning to stay with him. That’s where he is now.

What stays with me from that night is the mess, and how quickly we got into it — an unexpected crack in the walls of the Israeli-Palestinian conflict, and instantly all of us were in over our heads, at a loss about how to receive a visitor from an hour away. But what do you want? Israel is at war with Gaza. Except Israel is actually between wars at the moment, so what it really is is stuck. And everybody and everything is stuck with it. If you lift your shoe you’ll see the gum. What’s even stranger, though, is that if you don’t lift your shoe, you might never know the gum’s there.

Shelley J. Klein has recently returned from a year in Tel Aviv and lives in Greenpoint, Brooklyn.

Getting Out of Gaza Was the Easy Part