The Secret Jewish History of The Day of the Dead 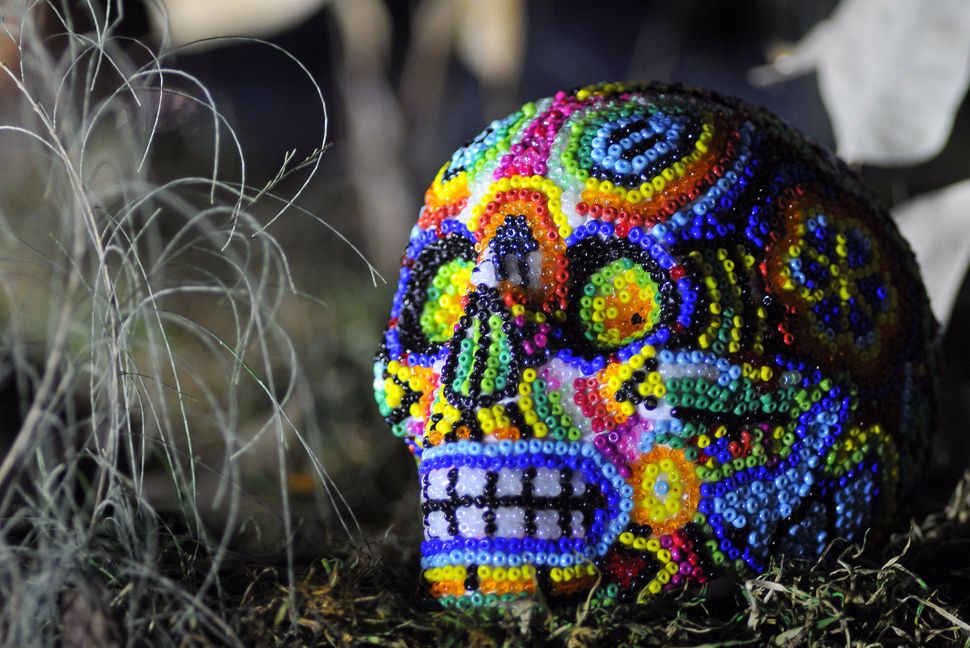 Like Jerusalem, Athens and Rome, Mexico City is one of the great cities of the world. It is layer upon layer of different cultures. There are the majestic and inspiring layers of the Teotihuacan and Toltec peoples of 2800 and 1000 years ago respectively; the amazing ruins of Tenochtitlan of the Mexica (pronounced Meh-shi-ka) or as they are known outside of Mexico, the Aztecs, from 500-700 years ago. There are the Spanish Colonial influences throughout the city. All of this is surrounded by the modern metropolis of the Distrito Federal — Mexico City.

On a visit to Mexico City, in late October, there were preparations and decorations for the annual rites of Dia de los Muertos – the Day of the Dead. From late October through early November, Mexicans of all walks of life celebrate Dia de los Muertos. This tradition of honoring the dead predates the Spanish Catholic conquering of Mexico in 1521. It was born from the primeval energies of humans’ wonder and fears surrounding death and the afterlife.

Families visit cemeteries where they have picnics to comfort their immediate families and the spirits of those that passed away. When they leave, families sprinkle marigold petals from the grave to their homes to show the spirits how to make their annual visit.

Most homes and businesses set up an ofrenda, an altar or shrine. The ofrenda has pictures of relatives that died, flowers, colorful decorations, and foods the deceased would want to eat. There is almost always some tequila.

There is a familiar comfort in this ancient tradition connecting the departed with the living.

In many Jewish homes, we have a similar tradition, yet often the connection is not made.

Not everyone, though, believes in HaShem/G-d. Some believe in the ‘Big Bang.’ The theories are not incongruent. They are merely defined differently.

In Jewish liturgy, reference is made to the Shekhina. The spirit of G-d that permeates the earth, atmosphere and universe. The Shekhina is a holy spirit manifestation of HaShem with which Jews can connect to the eternal through performing mitzvot.

Jews welcome the Shekhina on Shabbat.

My friend and AEPi fraternity brother, Bryan Goldsmith who has a Ph.D. in Chemical Engineering, explained to me that “All elements up to iron (#26 on the periodic table of elements) are formed by fusion within the stars. All of the other elements are essentially formed at the inevitable end of a star’s life that culminates in a supernova. The elements that compromise the human body were all formed within the stars. Moreover, the human body mostly comprises oxygen, carbon, hydrogen and nitrogen, which are the four most common elements in the universe. Coincidence? I think not.”

Knowing we are connected with the Universe, with HaShem and with each other, we connect with every ancestor before us. Like a Day of the Dead ofrenda, every week Jews have a simple way to connect with all of our ancestors.

Jews are the people who invented the “weekend” with the celebration of Shabbat. For thousands of years, people worked every day, from sunrise to sunset. Except for Jews. Jews rested on Friday night through Saturday night. In ancient times, Jews were mocked for having this day of rest.

We can make every ancestor feel warmth and welcome in our modern homes by kindling the Shabbat candles and sanctifying the evening by saying kiddush over wine and the blessing over challah. The kiddush prayer over the wine states “[G-d]…has given us, in love and goodwill, His holy Shabbat as a heritage, in remembrance of the work of Creation. The entire celebration of Shabbat is a weekly celebration of the creation of the universe.

If the spirits of our ancestors from 50, 100, 500, or even 2500 years ago entered our homes, they would immediately know what is taking place. It would be as familiar as seeing the moon at night.

On Friday night at our home, I use my Grandmother’s very old and modest double candelabra to hold the candles. After I sing the prayer for the wine, everyone says amen, and the goblet is passed to everyone to partake.

If our ancestors were in our physical presence, they would join in our prayers and drink with us. When we come together in the home for the sacred, in its own way, we invite our ancestors to something recognizable.

When we perform a mitzvah, it brings merit to our family and our ancestors. After all, where did we learn to do mitzvot? We learned first from our families. All of our Mothers and Father’s reminded us to say “good morning, please and thank you.” Which can fall under Rabbi Shammai’s philosophical commentary in the Pirkei Avot, the Ethics of the Fathers, to “receive everyone with a cheerful face.”

All of the great civilizations of the ancient past, the Mexica, the Romans, the Greeks, Pharonic Egypt — are extinct and we marvel at their ruins. Yet we Jews remain stronger than ever before. And unlike those civilizations, our traditions are alive, strong, and in many profound ways, close to the same as they were 2000 plus years ago.

We are able to welcome anyone to our table on Shabbat, to enjoy and share in our heritage passed to us by our parents and grandparents for millennia. We welcome in the Shekhina. Because we are all created in HaShem’s image, and created at the birth of the stars, the energy of our ancestors follow in just like at Day of the Dead. Or maybe since we all share the same molecules and atoms, they never really left us?

Shabbat is our night and day of life. Our day of rest and renewal. Come celebrate with our great people and family, light the candles, and share some wine this Friday night. Celebrate our connectedness and our creation.

Neil Goldstein Glick, a former six-term elected official in the District of Columbia Government, writes on Jewish/Israel LGBT Issues for *A Wider Bridge http://awiderbridge.org/category/views/neil-goldstein-glick/. His writing has been featured in Tablet Magazine, *The Washington Times and Literary Hub. He resides in Washington DC.*

The Secret Jewish History of The Day of the Dead