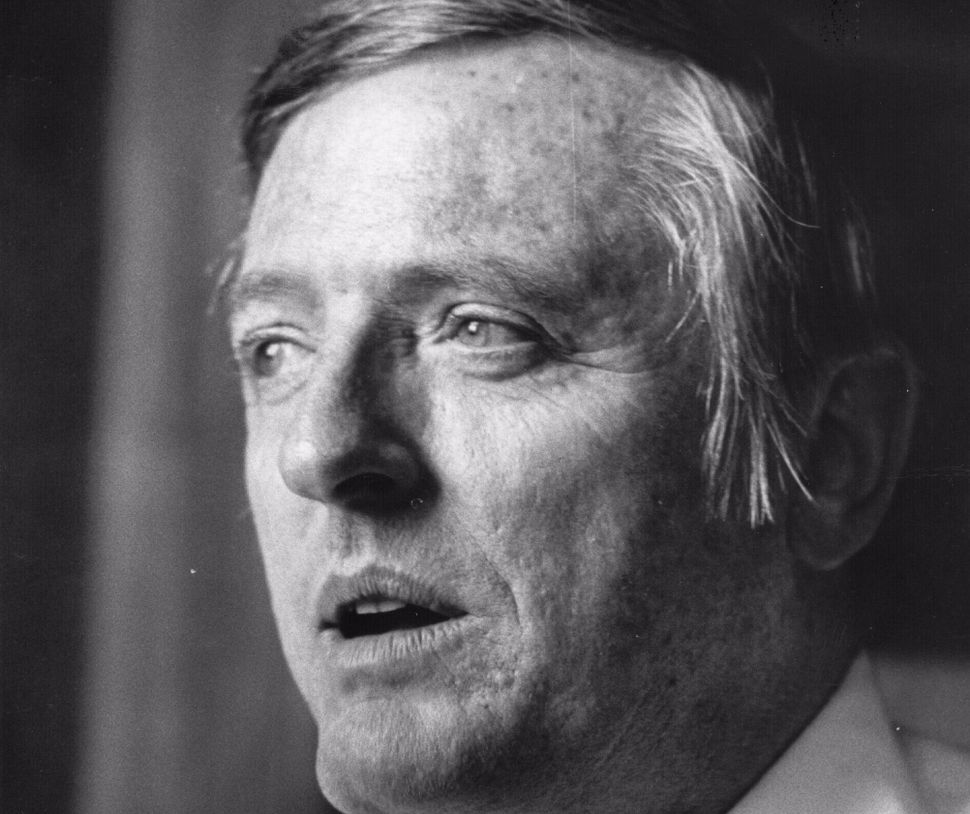 The degree to which the conservative editor and commentator William F. Buckley Jr., founder of National Review magazine and TV’s “Firing Line,” was inspired by contacts with Jewish contemporaries may not be fully known to those outside his circle of friends and political foes. Buckley, who died in 2008, is honored with “A Torch Kept Lit: Great Lives of the Twentieth Century.” It is a bintel of memorial appreciations by Buckley, chosen by James Rosen, chief Washington correspondent for Fox News.

A vocal Catholic, Buckley once wrote: “I’ve always subconsciously looked out for the total Christian and when I found him he turned out to be a non-practicing Jew.”

He was referring to Richard Clurman (1924-1996), an American Jewish journalist and administrator. Nephew of Harold Clurman, the theater critic and director, Richard Clurman was noted for expertise on media, especially relating to his long-time employer, Time Magazine. Buckley may have sought another “total Christian” in the conservative Jewish activist Marvin Liebman (1923 –1997), a National Review cofounder. Liebman converted to Roman Catholicism with Buckley standing as his godfather and Buckley’s sister Priscilla as godmother. Later, Liebman abandoned conservative causes for their homophobia and also renounced Catholicism. In his memoir “Coming Out Conservative” (1992) Liebman wrote that as a gay Republican, he had started to feel “like a Jew in Germany in 1934 who had chosen to remain silent, hoping to be able to stay invisible as he watched the beginning of the Holocaust.”

Despite a taste for identifying Christianity in Jews, Buckley was usually gentlemanly, even courtly, as the host of Firing Line. Through verbal barbs, he remained collegial with Jewish guests, even those with whom he shared no common ground, such as the community organizer Saul Alinsky, activist Betty Friedan and Beat poet Allen Ginsberg. The program, which ran for over thirty years until 1999, seems civil compared to current political talk TV. At its best, with Buckley and Norman Mailer in 1968, two preening egos shared a stage, relishing each other’s starry personas. In 1963, Buckley wrote that Mailer was “very often” right, a major concession given their many disagreements. In 1994, with Friedan and other feminist guests, Buckley’s face was twisted into a near-permanent rictus, as if relishing the unaccustomed company he was keeping for broadcast purposes. Exchanges with historian Arthur Schlesinger (1917-2007), could be acerbic, while still remaining polite. With professional comedians, Buckley’s rhythmic delivery of put-downs could be musicianly, even if the laugh content of his one-liners was lacking. Groucho Marx was a wary, ironic guest in 1967, while Buckley was eerily comfortable as a guest on a contemporaneous Woody Allen program.

A few encounters with Jewish notables were inescapably negative, for example the producer and TV host David Susskind (1920–1987). In 1966, Buckley alleged: “Mr. Susskind is a staunch liberal. If there were a contest for the title Mr. Eleanor Roosevelt, he would unquestionably win it.” To which the sober-sided Susskind replied:

“I must say that I regard that introduction as somewhat rude and insulting, Mr. Buckley. I had hoped, on the occasion of your having your own television program, you would abandon your traditional penchant for personal bitchiness and stick to facts and issues; but evidently your rude behavior is congenital and compulsive. And so I forgive you.”

Even so, Susskind later admitted to his host: “You are not without charm. You are, in fact, in my view, the most elegant anachronist in our country.” A Buckley article from 2005, ostensibly paying tribute to Johnny Carson, revived the feud:

“David Susskind is widely forgotten, but he was a singular presence on television for about 20 years… I was sometimes his guest, and he developed over several years an uncontainable sense of indignation … that I, and my views as expressed in National Review, should exist. At all.”

A happier exchange was with William Shawn (born William Chon; 1907 – 1992), editor of “The New Yorker,” whose refined manners and psychological vulnerabilities are described in one of the best vignettes in “A Torch Kept Lit.” Buckley could be uncommonly courteous for a busy journalist. In a memorial essay dedicated to the critic Hugh Kenner, Buckley praised a “candidly appreciative essay by Benjamin Ivry” on Kenner that had appeared in The New York Times. Bothering to cite the name of a journalist likely unknown to him shows rare generosity in the Fourth Estate. I recall being disarmed by this graciousness from someone who was justly criticized for – among other stances – defending Senator Joseph McCarthy, opposing the Civil Rights Act of 1964, and producing an op-ed in The New York Times in 1986 proposing:

“Everyone detected with AIDS should be tattooed in the upper forearm, to protect common-needle users, and on the buttocks, to prevent the victimization of other homosexuals.”

No reliable guide on HIV/AIDS policy, Buckley may have also overestimated his own astuteness with “In Search of Anti-Semitism” (1992). In this book, he painfully determined that the paleoconservative political commentator Patrick Buchanan was guilty of anti-Semitic statements, as was Buckley’s friend and “National Review” senior editor Joseph Sobran, accused of Holocaust denial. Buckley claimed his “credentials” for judging such matters included his “own father’s anti-Semitism.” At age eleven, Buckley had been bitterly disappointed not to be included when his brothers and friends in Connecticut burned a cross outside a Jewish resort.

Reviewing “In Search of Anti-Semitism,” the American Jewish sociologist Nathan Glazer noted that National Review had “succeeded in turning the ideological right from a group of sects into a major force. In doing so, it had been careful to avoid any hint of anti-Semitism. In the end, Mr. Buckley banned Mr. Sobran from writing on any subject touching the Middle East conflict in National Review. When, during the gulf war, Mr. Sobran rejected the magazine’s support for the war, Mr. Buckley decided to demote him. However, Mr. Sobran himself chose to step down as senior editor and become a critic at large. But of course the main issue was Mr. Buchanan, who in his opposition to the war with Iraq had asserted that only Israel and its American Jewish supporters were for it… Mr. Buckley resists the simple conclusion that Mr. Buchanan is an anti-Semite. His own formulation is more carefully hedged, and the care with which it has been formulated is indicated in the fact that he repeats it four times: ‘I find it impossible to defend Pat Buchanan against the charge that what he did and said during the period under examination amounted to anti-Semitism, whatever it was that drove him to say and do it: most probably, an iconoclastic temperament.’”

A sign of the remoteness of anti-Semitism from Buckley’s central concerns was his suggestion in 1972 that Israel be annexed as the 51st American state. Apparently Buckley was not joking about dissolving a sovereign state forged only a few decades before. Even so, some Jewish guests on his program clearly struck a common chord with Buckley. In 1975 on “Firing Line,” the Democratic politician Allard Lowenstein (1929–1980), conveyed doubts about the official version of Robert F. Kennedy’s assassination. Lowenstein, noted for his friendships with conservatives, was eulogized by Buckley in a text saying little of a personal nature about his good friend other than that Lowenstein was typically late to every appointment. A more rounded portrait emerges of the economist Milton Friedman, termed a “sometime skiing buddy,” before age and physical ailments made him stop sports activity.

Civility could warm into ardent discipleship, as with the pianist and harpsichordist Rosalyn Tureck, whom Buckley emulated by trying to play the harpsichord himself, reportedly with iffy results. Another keyboard celebrity, Vladimir Horowitz, was peeved when Buckley committed the social faux pas of leaving an intimate dinner party before being officially dismissed by the maestro. Other Jews remembered in these articles followed a quasi-tragic career trajectory. A.M. Rosenthal (1922 –2006), longtime powerful editor of “The New York Times,” is described in his heyday as bellowing with rage at Buckley. After retirement, Rosenthal’s column in “The Times” was reduced in frequency, and then eliminated. The last glimpse offered of Rosenthal is as someone diminished by age, who could no longer follow a train of thought through a lunchtime conversation. Like Rosenthal, William Shawn was another once-mighty editor evinced from his professional role. The poignancy of these Lear-like situations, although described with the usual Buckley dryness, may have held special personal resonance about his own later years.