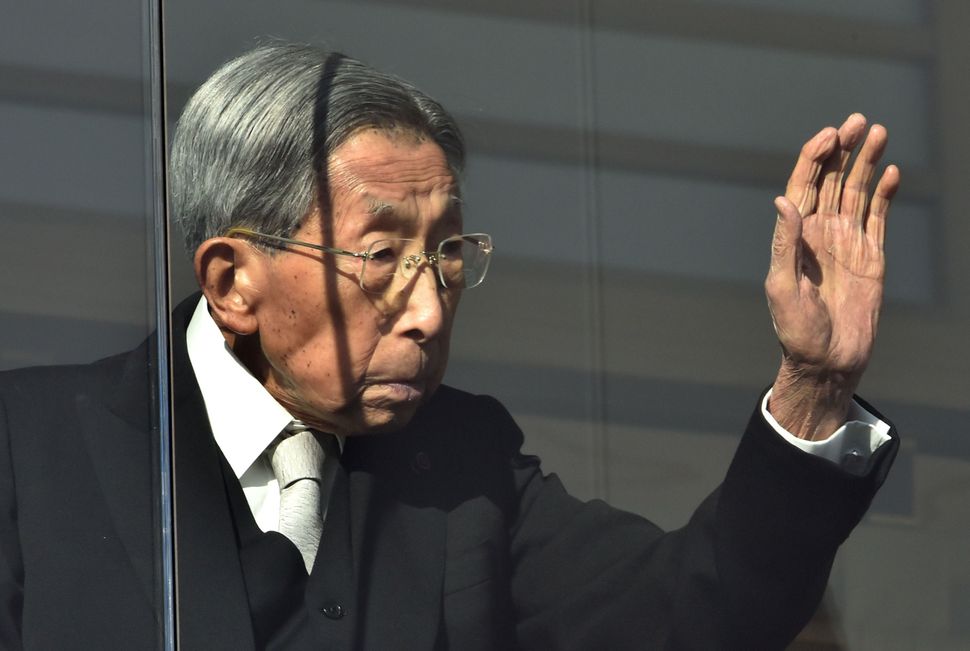 Takahito, Prince Mikasa, who died on October 27 at age 100, was doubtless the member of Japan’s Imperial family with the most Yiddishkeit. He was the youngest brother of Emperor Hirohito and uncle of Akihito, the reigning Emperor of Japan. Prince Mikasa was, as Ben-Ami Shillony’s “The Jews and the Japanese” explains, a prominent scholar with an interest in Judaism and Israel. Prince Mikasa’s enthrallment with the ancient Middle East developed after the war, when he studied at Tokyo University. Shillony’s “The Emperors of Modern Japan” notes that in 1955 the Prince began teaching at Tokyo Women’s University, a Christian college: “Specializing in Judaism and Christianity, Prince Mikasa was critical of the Shinto myths.” Why did he reject his national past?

As “The Mainichi” reports, for a year in 1943 Prince Mikasa was officially stationed at the expeditionary army general headquarters in Nanking, China. There, he later wrote, he learned of atrocities committed by the Japanese army. By the war’s end, he stated: “I was set free from the extremely unnatural Imperial system — or a ‘prison without bars’ if I am allowed to describe it in a candid manner.”

Prince Mikasa saw Middle Eastern history as a liberation from his family’s tradition-bound past. Rabbi Israel Goldstein (1896–1986), a founder of Brandeis University, suggested that the Prince was freeing himself from political, as well as cultural and historical, bonds. In his memoirs Rabbi Goldstein recounts a visit to Japan in 1959 where he met Prince Mikasa, a “noted liberal.” He adds that the Japanese royal “had little patience for court ceremonial… The Japan Socialist party backed Prince Mikasa. If they ever came to power, he would be their man. Labor unions were strong and well organized in Japan, but some of their ‘Socialist’ leaders were under marked Communist influence. Although members of the Imperial family had lived modestly since the end of World War II, Prince Mikasa lived even more modestly than the rest.”

Rabbi Goldstein admits being “impressed by the extent of [the Prince’s] knowledge of Judaism. He had become interested in it, he explained, out of a desire to understand Christianity, and this desire had led him to study the origins of the Christian faith and its scriptural basis, the Old Testament. When he mentioned how greatly he had been struck by the connection between the soil, the religion, and the reverence for ancestors in Judaism, I could well appreciate the role of his Japanese background in predisposing him to such an attitude. Prince Mikasa, it appeared, occasionally attended Jewish religious services and communal functions. I opened the conversation by mentioning the fact that his interest in Jewish studies was known and respected.”

Likewise impressed by the Prince’s erudition was Samuel Noah Kramer (1897–1990) the American Jewish Assyriologist and expert in Sumerian language. Meeting the Prince in 1961, Kramer later recalled him as a “scholar deeply interested in the archaeology and history of the Bible Lands.” According to some sources, Prince Mikasa may have acquired his knowledge of Hebrew from Setsuzo Kotsuji (1899-1973) an anti-Nazi activist during World War II who taught Hebrew. Son of a Shinto priest, Kotsuji converted to Judaism at age 60, complete with a bris. Prince Mikasa’s interest in things Jewish and his war experiences were somewhat less trenchant than Kotsuji’s.

The Prince repeatedly recounted that his impulsion towards Judeo-Christian studies occurred during wartime service in China. Yet the authors Sterling and Peggy Seagrave quote eyewitnesses alleging that in fact, the Prince lived in the Philippines for three years during the war. There he would have been involved with what is known as Yamashita’s gold, war loot supposedly stolen in Southeast Asia by Japanese forces during World War II, named after a General who commanded Japanese forces in the Philippines. If indeed Prince Mikasa had ventured as far as the Philippines during World War II, he likely would have seen even more war atrocities committed by his compatriots. All the more reason to reject the ancestral path that had led to such national degradation.

After the war, the Prince majored in Hebrew and European history. He also became an unlikely devotee of American-style square dancing, prefacing a book about a U. S. State Department tour of folk dance instructors throughout Japan. “Thank You Deeply!!: United States – Japan” (1956) was published by Folk Dance House, New York. This was not surprising. Prince Mikasa had always been part of a highly internationalized family which only became rigid in its Japanese-ness with the rise of militant Fascism. A photo exists from 1924 of the Prince, then aged around nine, rearing back to throw a baseball like a comic urchin in a film by Yasujiro Ozu.

There is no doubt of the Prince’s genuine interest in Jewish history and the Hebrew language, but these were by no means exclusive interests. Hebrew was but one of a multitude of subjects that intrigued the polymath Prince. In 1966, Richard D. Lewis a British language teacher tutored the Prince in French, “one of six or seven languages he could handle” in addition to a new pastime, ice dancing. Prince Mikasa translated into Japanese three books by the American biblical scholar Jack Finegan, including “Light from the Ancient Past” which has been criticized for soft-pedaling Hebrew tradition in favor of Christian themes.

Still, for the Prince, Judaism was more than just something to think about when not ice dancing. For many years he served as patron of Tokyo’s Jewish Community Center and the Japan-Israel Friendship Association. He never visited Israel because until quite recently, the Japanese government respected the oil-rich Arab nations’ boycott of the Jewish State. Prince Mikasa had dared object to the way the Second World War was being conducted, and confronted his brother Hirohito, unsuccessfully urging him to accept blame for war crimes and abdicate after the war. Still, he lacked the temerity to defy Japan’s post-war boycott of Israel.

Instead, in 1954 Prince Mikasa established the Society for Near Eastern Studies in Japan, sponsoring archaeological digs. In 1968, when the International Association for the History of Religions hosted a conference in Jerusalem, Prince Mikasa was not present. Although honorary president, all he felt able to do was send a demure note of thanks to Gershom Scholem and R. J. Zwi Werblowsky for organizing the event.

This timidity did not prevent other travels, as in 1975, when he taught at London’s School of Oriental and African Studies. There, the historian Chimen Abramsky hosted a reception for the Prince, whom he esteemed as a “man who had made a name for himself as a specialist in Aramaic,” according to a recent memoir by Abramsky’s grandson. Had the Prince resisted a Japanese boycott of Israel, he would have made an even greater name for himself.