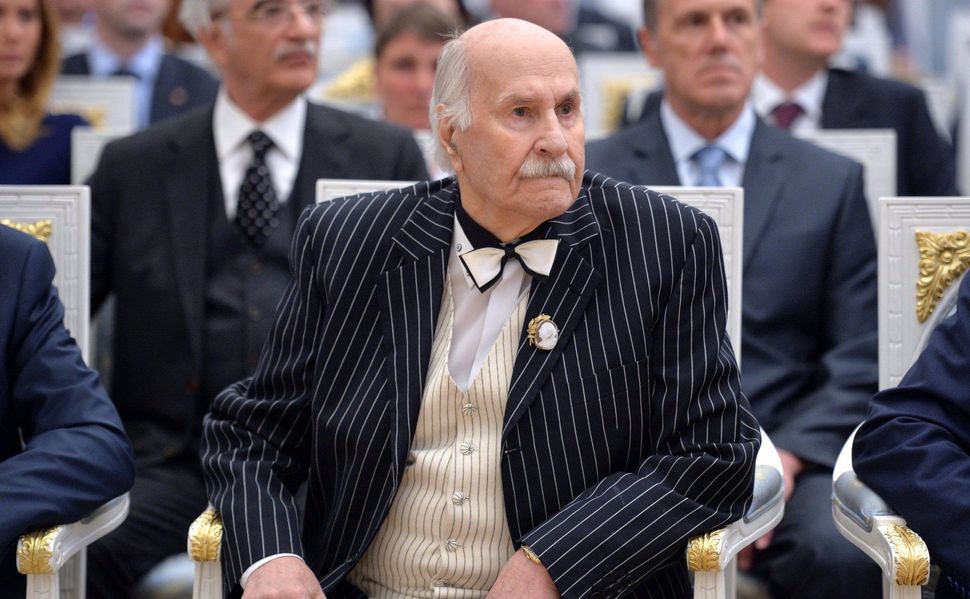 The Russian Jewish actor Vladimir Zeldin, who died at age 101 on October 31, proved that if a performing career is long enough, it can stretch from one dictatorship to another. A mainstay of Moscow’s Red Army Theatre, now known as the Russian Army Theatre, Zeldin’s powerful presence and resonant voice filled this vast, crushingly Stalinist edifice built to display full-sized tanks, ships, and masses of cavalry onstage as proofs of Soviet military might. In recent performances at age 99, as the protagonist in Dale Wasserman’s musical “Man of La Mancha,” a role he first essayed at age 90, Zeldin showed startling stamina and nimbleness for a near-centenarian.

Even after he broke a hip in a Moscow hospital at age 100, he returned to the stage in Lope de Vega’s “El maestro de danzar” (The Dance Teacher), which he was scheduled to reprise soon. This image of forthright indestructibility won him repeated kudos from Russian President Vladimir Putin’s Kremlin. Berel Lazar, the Italian-born Chief Rabbi of Russia who has attracted criticism for his devotion to Putin, issued a statement to the state-operated domestic Russian-language news agency RIA Novosti on Zeldin’s death.

According to Rabbi Lazar, Zeldin “always remembered his Jewish roots and was not going to abandon them, although in the Soviet period, a Jewish name could significantly slow down your career.” The career of the Russian Jewish actor Solomon Mikhoels (1890-1948), a supreme Yiddish-language King Lear, was indeed slowed down when Stalin had him murdered. Rabbi Lazar added that one of Zeldin’s last stage roles was as Romuald Messerschmann, a Jewish “fugitive from the Nazis” in the French playwright Jean Anouilh’s 1947 satire “Invitation to the Castle.” Anouilh’s character of Messerschmann, a rich, self-important businessman obsessed with money and power, is closer to anti-Semitic stereotypes than something a Jewish actor in search of roots might aspire to. Anouilh’s Messerschmann uncomfortably evokes official state descriptions of Russian Jewish oligarchs summarily jailed by Putin. Zeldin was surely aware of these echoes. In an interview cited on the website of the United Jewish Community of Ukraine Zeldin referred to how his Jewish father was obliged to be christened:

“When my father enrolled at the Moscow conservatory, Jews were not allowed to live and study in Moscow. So he had himself christened… And when there were periods of persecution of the Jews – just recall the “Doctors’ Plot” and so on – many people changed their surnames. But I didn’t change my surname – I was always Vladimir Mikhailovich Zeldin.”

Zeldin owed his initial stardom to being cast by the director Ivan Aleksandrovich Pyryev, known as the “high priest of Stalinist cinema,” in a light-hearted screen comedy. “The Swine Girl and the Shepherd” (Svinarka i pastukh; 1941) was retitled “They Met in Moscow” for overseas distribution. In this musical, stout agricultural workers joyfully thrive under Stalin’s inspiration, whereas in reality, the Soviet famine of 1932–33 killed an estimated seven million workers due to rigidly enforced political and economic policies. In the film, made shortly before the Nazi invasion of the USSR in 1941, Zeldin played a shepherd from a Caucasian ethnic group living in Dagestan, in the North Caucasus region on the Caspian Sea. His character meets a Russian swineherd at the All-Union Agricultural Exhibition in Moscow and falls in love with her.

Stalin’s obsession with film propaganda likely prolonged Zeldin’s life. The actor had been ordered to fight in a tank division on the front, but Stalin prioritized reshoots for “The Swine Girl and the Shepherd” to suit his personal requirements, so Zeldin continued work after the film had been officially completed. “The Swine Girl and the Shepherd” would be the last movie made in the USSR before the Nazi invasion which caused hundreds of thousands of casualties. Perhaps this ominous context gave the film its unspoken, and surely unintended, aura of terror underlying the merriment, with bustling actors akin to animals made to dance on an electrified floor for the amusement of the masses. Zeldin’s vehement, outsized theatrical personification of an ethnic minority concealed his off-screen otherness as a Russian Jew. According to the Russian news agency TASS, Zeldin’s performance convinced audiences that he was in fact an ethnic Dagestani.

As a sign of gratitude, and possibly continued fear, Zeldin joined the Red Army Theatre shortly after the war. When lavish celebrations of his centenary were announced, he told “The Moscow Times” that he was unenthused, “but I cannot do anything about it.” He might have said the same about his instrumentalization in the propaganda machines of Stalin, and later, Putin. This lionization will continue posthumously, with burial on November 3 in Moscow’s Novodevichy cemetery. During the Soviet era, this graveyard was second in prestige only to burial in the Kremlin Wall Necropolis, near Lenin’s remains. These days, Novodevichy Cemetery only accepts the highest nomenklatura, the likes of President of the Russian Federation Boris Yeltsin and world-famous musician Mstislav Rostropovich. Yet amid all the mummification of official regime approval, an inner light of resistance may have warmed Zeldin’s creative path.

One of his key film roles was as Sir Lawrence John Wargrave, the hanging judge in “Desyat Negrityat,” a 1987 Russian adaptation of Agatha Christie’s “And Then There Were None.” Playing a homicidal justice guilty of legal executions, this actor who lived through the 1930s Moscow show trials, part of Stalin’s Great Terror, was surely aware of historical precedents.

Later, Zeldin took the role as Cervantes’ tragicomic hero as emblematic, entitling his memoirs, “My Profession, Don Quixote.” In 2006, Zeldin told the press, as quoted in “European Visions” that during his research for the role, he found an aphorism, “One Don Quixote is excellent. One hundred Don Quixotes are fearsome.” He added to this mysteriously unattributed saying: “When art is measured by profit, by level of popularity, by success, it would be no bad thing to get the support of a hundred Don Quixotes…” Had he lived even longer, Zeldin might have finally assembled such a regiment to tilt against windmills in Russia today.