A Psychedelic Pippi Longstocking Creates Art So Beautiful It Hurts 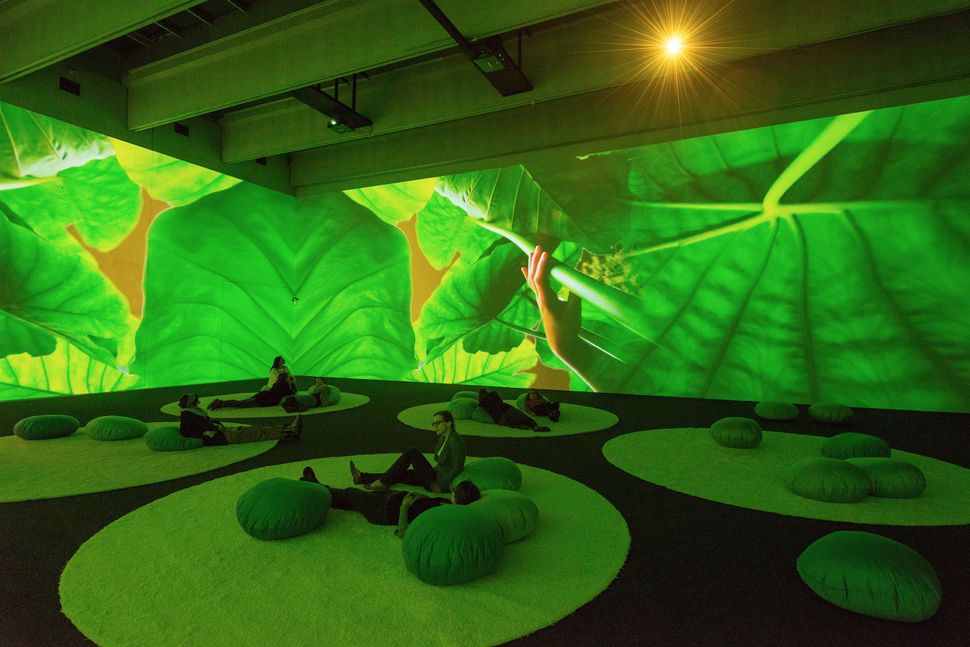 Image by Courtesy of Pipilotti RIst

Sometimes, going to see an art exhibit can feel like a religious experience; other times, that feeling comes only after you get a chance to leave.

This came to mind the other day, after I attended the opening of the Pipilotti Rist retrospective at the New Museum, on the Lower East Side of Manhattan. If you don’t know this Swiss artist’s work or have only a passing familiarity with it, prepare yourself for an onslaught of adjectives that may seem both exaggerated and insufficient — mind-blowing, psychedelic, phantasmagorical, kaleidoscopic.

In “Pipilotti Rist: Pixel Forest,” which the New Museum bills as the first New York survey of Rist’s work, the artist’s projections and video-enhanced installations transform three floors of the museum into all-encompassing, mesmerizing environments. When you walk through the title installation, “Pixel Forest,” navigating your way around a maze of suspended lights that suggest illuminated rock candy, you might feel that you’ve wandered into a groovy 1960s nightclub that you thought existed only in movies with go-go dancers in them. On another floor, a room glows green while you sit on cushions and watch images of vegetation swirl before you. On the fourth floor (“4th Floor to Mildness”), you lie back on double beds in a darkened room and watch videos projected onto the ceiling. Full disclosure: This room brought to mind the office of my old dentist, who soothed his patients with videos of underwater invertebrates, but for most other viewers it should provide an effectively hallucinatory dreamscape. Rist herself has said that lying flat on her back and looking up is her preferred mode of watching TV.

A week before this exhibit opened, Ken Johnson wrote in The New York Times that “Max Beckmann in New York,” currently showing at the Met, was the best show he’d seen anywhere in New York this year. If he had waited a week, he could have said the same thing about a totally different show. “Pixel Forest” is that powerful, that memorable.

And yet, a sadness lingers here. Rist’s work is often underscored by inspired and, occasionally, disturbing, musical choices. “Sip My Ocean” features the artist covering Chris Isaak’s “Wicked Game,” which she alternately sings and screams in a manner reminiscent of Yoko Ono, an artist Rist has cited as an influence. In an earlier work, “I’m Not a Girl Who Misses Much,” also on view at the New Museum, the artist’s voice is sped up and slowed down as she cavorts and squeaks her way through some lyrics of the Beatles’ “Happiness Is a Warm Gun.”

Rist is a playful artist — she named herself after Pippi Longstocking — but the melancholy quality here is as hard to define as it is to shake, reminiscent of watching indelibly beautiful images in a tragic film, or seeing a candy store aglow on an otherwise grim block. One gets the sense that Rist, an avowed atheist, is attempting to graft beauty and wit onto what she might otherwise perceive as a dark, godless universe.

A 2009 New York Times Magazine profile of Rist , written by Randy Kennedy, described the artist as still essentially rebelling against her upbringing in Switzerland’s Rhine Valley region, where she attended Sunday school and read the Bible daily.

In Contemporary Magazine, Rist told her interviewer, Michele Robecchi, that she created art out of a sense of guilt. “I haven’t sorted it out yet,” she said. “I think it comes from my Protestant education and the whole idea that when you’re born, you inherit the sin or the guilt of your ancestors.”

Rist’s statements square with the feeling that “Pixel Forest” gave me. It’s strangely disquieting to emerge from such a lovely and provocative exhibit and feel a sense of relief.

Just a few hours later on the same day, Rist’s music and imagery were still assaulting my consciousness as I walked past The New Jewish Home, a rehabilitation center on the Upper West Side of Manhattan. Standing in front of the hospital was an elderly blind woman carrying a cane. She asked me where her bus stop was, and after I told her it wasn’t as close as she thought it was, she asked if I could take her there. She grasped my hand and we walked west toward Amsterdam Avenue. Along our way, she told me that she had just been visiting her husband. He has diabetes, she said, and had just had his foot amputated. But even so, he was still keeping up hope, she said, and so was she. As long as she knew that God was watching over the two of them, she knew that, ultimately, everything would be all right.

The bus arrived at the stop, and the blind woman got on. Before the doors closed, I heard her call after me. “God bless you,” she said. “And God bless us all.” It seemed almost like some sort of sign.

For the first time that day, the world of Pipilotti Rist — both its loveliness and its darkness — seemed both far away and very close. I was back in this world, another place where beauty and sadness are always inextricably intertwined.

A Psychedelic Pippi Longstocking Creates Art So Beautiful It Hurts