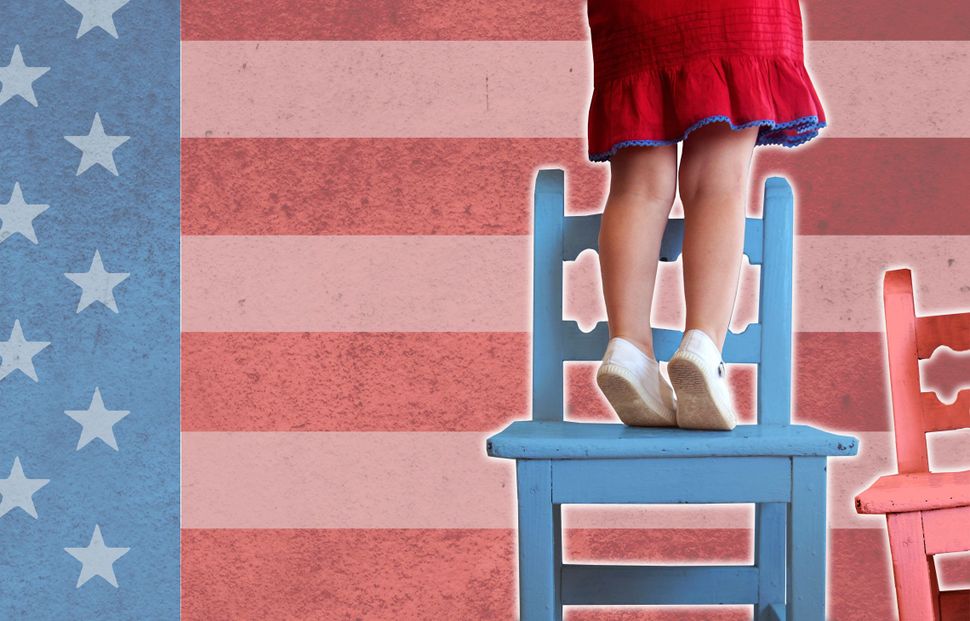 My kindergarten teacher at Yeshiva Central Queens was not modern—Mora Ruth had obvious favorites, stared at us while we ate lunch, called us made-up names, and totally let us do gross things like sniff each other’s tushies.

The only thing I didn’t like about Kindergarten, back in 1969, was that if you were a girl you had to sit on little pink chairs. Boys could sit on the bigger blue chairs.

Lucky for little Lisa, I was a favorite; Mora Ruth was friends with my mother.

She did stare at me while I was eating my lunch, though, but so did everyone else. My mother packed my lunch as homage to Grossinger’s — if I never ate again, ever, I would still be full.

From my lunch box, I would extract a large paper plate, two decorative napkins, one for the table and one for my lap, a wide thermos of orange juice, not diluted, and a plastic fork. I would lay these out in front of me. Then, rising from my little pink chair to better leverage my upper body strength, I would insert both hands into the lunchbox and slowly, slowly, in a smooth motion so as not to pull or strain, carefully lift the TUNA FISH SANDWICH, that two-story testament to expert Jewish Motherhood, bursting from its holy enshrinement in aluminum foil, and set it down on my plate.

The smell of that sandwich would stop everyone. Moist and fresh like childhood itself, the white bread was ever so slightly tinged by the red tomato from the Ramat Gan fruit market on Main Street, the extra bits of tuna fish escaping the hug hold of Hellman’s mayonnaise.

I, expert recipient of the deluxe products of expert Jewish Motherhood, would acknowledge the sighs of my lesser-loved classmates, and take that first impossible bite.

My mother had also packed me a large scraped carrot, a bag of Wise potato ships, a couple of those small, purple, autumn plums, and a Hershey Bar for dessert.

Full size, because there was no King Size back then.

But back to the pink and blue chairs.

“It’s not fair,” I kvetched to my mother after kindergarten one night, probably wearing that brown jumper with the amber buttons, mustard colored tights and brown buckled shoes that announced: I get all my clothes at Alexander’s.

My mother looked at me, her Master’s Degree in Early Childhood Education yet to be earned.

“If you want to sit on the big blue chairs, why don’t you tell your teacher?”

No one told a teacher anything. You listened to, obeyed and feared a teacher. I was a very good little girl. What exactly was my dutiful housewife mother even saying?

But there they were, the very next day. Morah Ruth had arranged all the little pink chairs and bigger blue chairs into a chet-shaped horseshoe, all set up for sharing-time.

I slowly walked over to her, and looked up.

“Mora Ruth,” I said, my long ponytail swishing in earnestness, “I don’t think it’s fair that girls have to sit on the little pink chairs and the boys get to sit on the bigger blue chairs.”

Mora Ruth stopped. She didn’t smile. She looked down at me.

Years later, when I was a young bride and new to Forest Hills, I saw Mora Ruth and her matching four-foot-eleven husband at the Y.

I towered above her, but she told me that I still had to call her Mora Ruth. She told me she still remembered that one afternoon in Kindergarten, I decided to put on the entire “Peter and the Wolf,” playing all the parts, singing all the different musical voices, jumping like the cat, flying like the bird, and oompah-ing like the grandfather, while the entire class watched. She told me she ran out and got Mrs. Ginsburg, the principal, to come and see it, too.

I remembered it too, but not the Mrs. Ginsburg part. If I had noticed her, I might have stopped. She wore gray pointy shoes and gray pointy hair. She was terrifying.

But I did remember everything that happened the day I asked Mora Ruth about the pink and blue chairs.

After a long moment, she did smile.

And just like that, we go from being kindergartners to being mothers ourselves and packing lunches for our own little girls.

And then, together as girls, we’re both going to pull that lever.

Lisa Mayer was a Clio-award winning copywriter on Madison Avenue in New York City. She now lives with her rabbi husband in Auburn, Maine, among the moose.