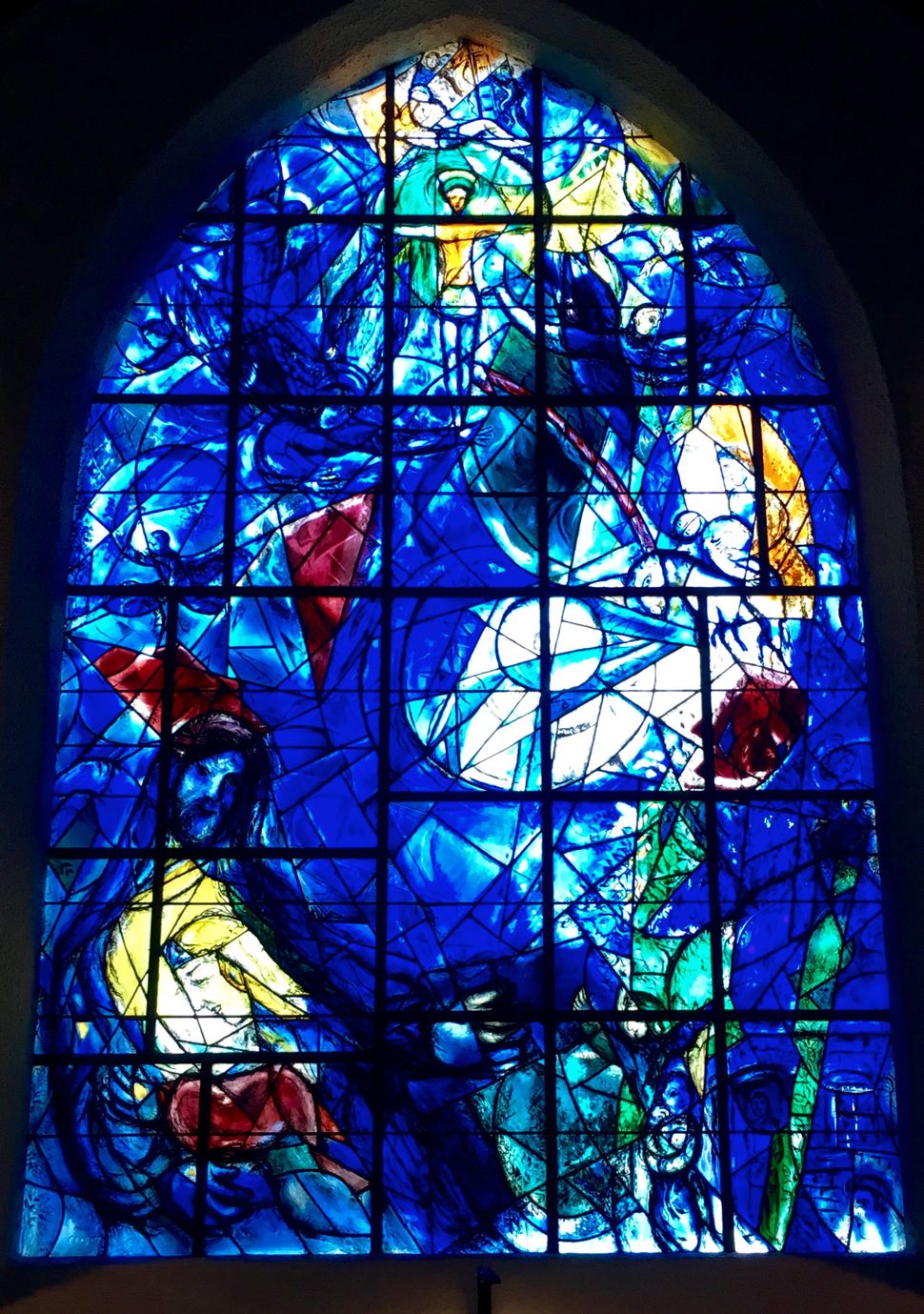 Union Church, in the Hudson Valley hamlet of Pocantico Hills, fits right into its bucolic surroundings. The sloping roof, modest bell tower and facade of rough local stone give it the look of a stately cottage. It’s easy to imagine that Marc Chagall, whose works brim over with nostalgia for his shtetl childhood, must have felt instantly drawn to this place when he first came here in May 1963 with the man who then was Chase Manhattan bank’s president, David Rockefeller.

The reason for Chagall’s visit was to present church officers with his sketches for a stained-glass window commissioned by Rockefeller, who had been dazzled when he saw the 75-year-old artist’s windows for Hadassah Medical Center displayed at the Louvre before they were sent to Jerusalem. Union Church already boasted a rose window by Henri Matisse, honoring Rockefeller’s mother, Abby Aldrich Rockefeller; it was the artist’s last work before his death in 1954. The Chagall window would go in the rear wall of the church, facing the Matisse. Its subject, reflecting the life of Rockefeller’s father, John D. Rockefeller Jr., was the parable of “The Good Samaritan,” from the New Testament.

Chagall, who was secularly, though profoundly, Jewish, might have seemed an odd choice for this project. But he was no stranger to designing church windows. Nor did he shy away from Christian themes or images. The domes of the Russian Orthodox churches in Vitebsk, where he grew up, appear and reappear in his paintings; the magnificent painted icons he saw on his clandestine childhood forays into those churches inspired not only his own iconography but also his incomparable sense of color. By the time he came to Pocantico Hills with his designs for “The Good Samaritan,” he had made windows for an abbey, a church and a cathedral in France, and was at work on the United Nations’ “Peace Window,” which features a crucifix among its spiritual symbols.

The officers of Union Church, where Rockefeller family members have worshipped since the 1920s, unanimously approved Chagall’s sketches. He went on to create eight additional windows to line each side of the nave. Seven illustrate verses from the Hebrew Bible. “The Crucifixion (Seek and Ye Shall Find)” window memorializes Michael Rockefeller, who had been lost at sea on an anthropological expedition to New Guinea in 1961. The dedication of the nave windows on January 28, 1967, made the front page of The New York Times above the fold. The Pulitzer Prize-winning art critic Emily Genauer wrote in The World-Herald that this was “the most successful and beautiful exhibition of Chagall’s genius in this country.” And, she added, “the most satisfying,” for a reason that also, ironically, has made these among the least visited of all his windows. Union “is no pilgrimage church,” she explained. It’s simply a local nondenominational Protestant Church, where Chagall pulled off the “rare feat, even for himself,” of making windows that “are not a distraction from worship for regular parishioners, but a luminous, mysterious evocation of serenity and sanctity.”

A sign alongside the road in front of the church says: “Yes, you may worship here. Please do.” There’s no such sign indicating the stained-glass wonders within. When I visited on a recent weekday morning, a Peter Pan tour bus had just disgorged 43 residents of a Connecticut retirement community, who filed inside and silently looked at the windows, which glowed like infinitely faceted jewels in the plain white walls, while being welcomed by two docents from the Historic Hudson Valley. This organization administers (along with the Rockefeller estate Kykuit and other Sleepy Hollow attractions the church’s museumlike functions. The Rev. Paul DeHoff, who has tended to the church’s primary function as “a living church” for the past 25 years, was quick to tell me that “windows do not make a church, no matter who they’re by.” However, he went on to say, his congregants are “proud and moved” by the windows, which, he stated, are “immeasurably important. It’s hard to quantify their importance.”

The bookshelves in his office are filled with volumes on Chagall. Over the fireplace is a poster of Chagall’s Paris Opera ceiling. DeHoff has seen every one of Chagall’s windows in France, England, Switzerland, Germany, Israel and the United States — 15 sites in all. “These,” he said, “are the best presentation, I think.”

The nave windows are small, set at the ends of pews, almost at eye level. The considerably larger, arch-shaped “Good Samaritan” window in the rear wall is also placed relatively low, making most of its fantastic imagery easily visible. Six of the nave windows are up-close-and-personal portraits of individual Hebrew prophets — Joel, Elijah, Daniel, Jeremiah, Ezekiel and Isaiah — that have more in common stylistically with Chagall’s iconic Bible etchings than with his other work in stained glass. Their accessibility brings into sharp focus Chagall’s unique, hands-on touches with grisaille that deepen and shape, almost sculpt, his subjects, enlivening their facial expressions, setting their bodies in motion, so that the windows “speak,” as DeHoff puts it, as Chagall intended. What he famously never wanted to do was to speak for them, to interpret them.

As Bella Meyer, Chagall’s granddaughter, told me in a phone interview, “My grandfather wanted (people) to look at his work with their own hearts.” When Meyer, whose New York floral design studio, Fleurs Bella, would have enchanted her grandfather, and whose work clearly suggests his influence, saw Union Church for the first time, in 1979, she was moved by “the intimacy of the setting” and by the beauty of the biblical images. “My grandfather loved the prophets in the Hebrew Bible,” she said. “He loved their stories. He was also guided by the spirituality of what one or the other of the prophets was saying. But then it was amazing that he chose to do ‘The Good Samaritan,’ which showed his openness to the whole Bible.”

It also showed his deep connection to the real-life Good Samaritan, John D. Rockefeller Jr., although Chagall was apparently as reticent on this subject as he was about any of his work. Even David Rockefeller did not find out until the 1980s, after the artist’s death, about the major role his father played in rescuing Chagall and his first wife and lifelong muse, Bella Chagall, from Nazi-occupied Europe. John D. Rockefeller Jr. headed the Rockefeller Foundation, primary funder of the Emergency Rescue Committee, which brought hundreds of imperiled artists and intellectuals to the United States. The Chagalls were among the last refugees the committee managed to spirit out of Vichy France. “It is for this reason, I believe,” David Rockefeller wrote in “Matisse & Chagall at the Union Church of Pocantico Hills,” “that Chagall became so deeply involved in his work for the Union Church. I am convinced that he viewed the windows as more than just another commission. He was creating works of deep spiritual meaning not just for my family, but for himself as well.”

The Chagalls spent much of their time in America in rural parts of New York, where the countryside brought back memories of their homeland. (“A lake, a forest, a pine tree, a birch tree — a piece of Russia,” Bella Chagall wrote in a letter to a friend.) They were in the Adirondacks when Bella Chagall died suddenly of a throat infection that today would have been easily treatable. She was buried in Westchester Hills Cemetery in Hastings-on-Hudson. Years later, the still grieving Chagall designed a stone for her grave, carved, simply and eloquently, with a heart flanked by two open hands. The cemetery is only about 15 minutes from Union Church.

On one of my visits to the church, a longtime docent, Charli Devnet, told me how she keeps making new discoveries in the windows. Half-hidden birds! Subtle stars (Jewish and non-)! Is that a shofar hovering over the head of Joel? Look at the way the angel Gabriel in the “Daniel” window resembles “someone Chagall might have known in Vitebsk!” “Every time of year,” said Devnet’s colleague, Laura Lee Keating, “every time of day, something different happens to the windows; every season, every type of weather, something new is always jumping out at you.” They showed me the profile of a woman’s face in the lower-right corner of “The Good Samaritan.” There seems to be a tear rolling down her cheek. “We think this is Bella Chagall,” Devnet told me. Could Chagall have placed his wife here, next to a male figure that they think is a self-portrait, as a secret gesture of thanks to the Good Samaritan who rescued them?

I asked Bella Meyer about this theory. “I think that’s absolutely possible,” she said. “This is a beautiful way to read them. Indeed, my grandfather would never say what was what. I remember, I looked, and I thought it was my grandmother. But we will never know.”

Elin Schoen Brockman’s articles and photographs have appeared in The New York Times, Tablet, Hadassah Magazine, and many other publications. She has just completed her first novel, “The Cloth Healer.”