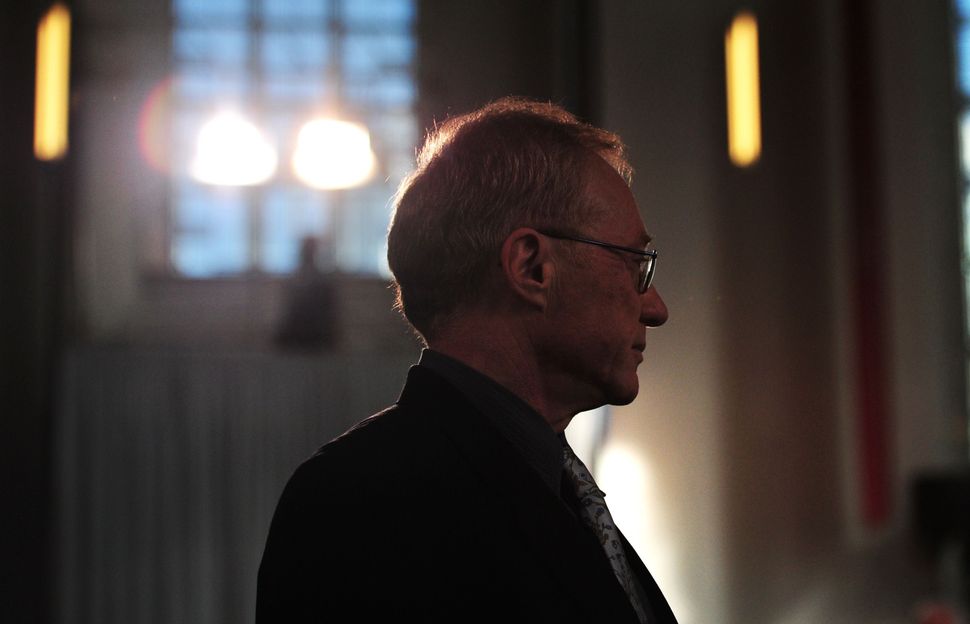 Even at an evening of comedy and literature, it’s impossible to escape the specter of Donald Trump.

At an event to celebrate the launch of his latest novel, “A Horse Walks Into a Bar,” in London, the author David Grossman compared Trump to Benjamin Netanyahu when he said “both of them know how to manipulate our deepest fears and primal instincts,” as well as our past traumas. Popular yet not loved, and someone who “fills people only with fears,” Netanyahu “knows how to create a sense of family” that “demands loyalty” and is “a test for every Israeli.”

Labeling Trump ‘unpredictable’ and ‘destructive,’ Grossman said, “If Donald Trump becomes more right wing than Netanyahu, it will be interesting,” adding that considering Trump’s public positions on Israel, “With such a friend, we do not really need enemies.”

“A Horse Walks Into a Bar” — which will be published in the United States early next year in a translation by Jessica Cohen — is set in a comedy club in small town Israel. It centers on the dramatic onstage disintegration of Dovelah G, an erratic yet charming veteran of the club circuit, when two people who were once near to him reopen old wounds. This comedy setting is unusual and something of a departure for Grossman, though in some ways this new book continues in the tradition of previous novels like “To the End of the Land” and “Falling Out of Time” in its examination of trauma.

“I hardly tell jokes,” Grossman said, which is different from having a sense of humor, but in the process of writing this book, he seemed to naturally attract them. In evaluating the comedy scene in Israel, he didn’t deem it to be that significant when compared to other forms of culture, saying that political satire like that seen on “Eretz Neheredet” isn’t particularly ‘biting,’ even in its impressions of Netanyahu. “I’m much more worried when the head of the opposition starts to impersonate Netanyahu,” Grossman said.

Well known for his peace activism and works of journalism like “The Yellow Wind,” Grossman’s novels have also faced up to the Israeli-Palestinian conflict, including in “The Smile of the Lamb.” There is a temptation, Grossman told the audience, to “protect myself from reality when I write — but I don’t want to avoid my life, which includes the conflict.” Rather, it is for the writer to take that conflict and “see what it does to people, how it affects people,” finding another way to describe the situation, in doing so not giving answers but merely asking questions. It is a challenge, he continued, interesting but often ‘painful.’

Grossman also spoke of his influences — Amos Oz and A.B. Yehoshua, Franz Kafka and Virginia Woolf — and of why and how he writes. “I will not sit and force myself to write a book only because I am a writer,” he said—though he is presently working on a new novel. He said that, to a certain extent, he feels most alive when writing, in the sense that one is somehow more attune to the world around you. Suddenly, the everyday—the material for fiction—feels more relevant. In writing his novels, which undergo twenty to twenty-five drafts, he will read the final version aloud to himself since it gives him a kind of objectivity and is, Grossman believes, the best way to rid the novel of its imperfections of voice and narrative. “I hope I get to hear it as the reader would hear it in his or her inner ear,” he said.