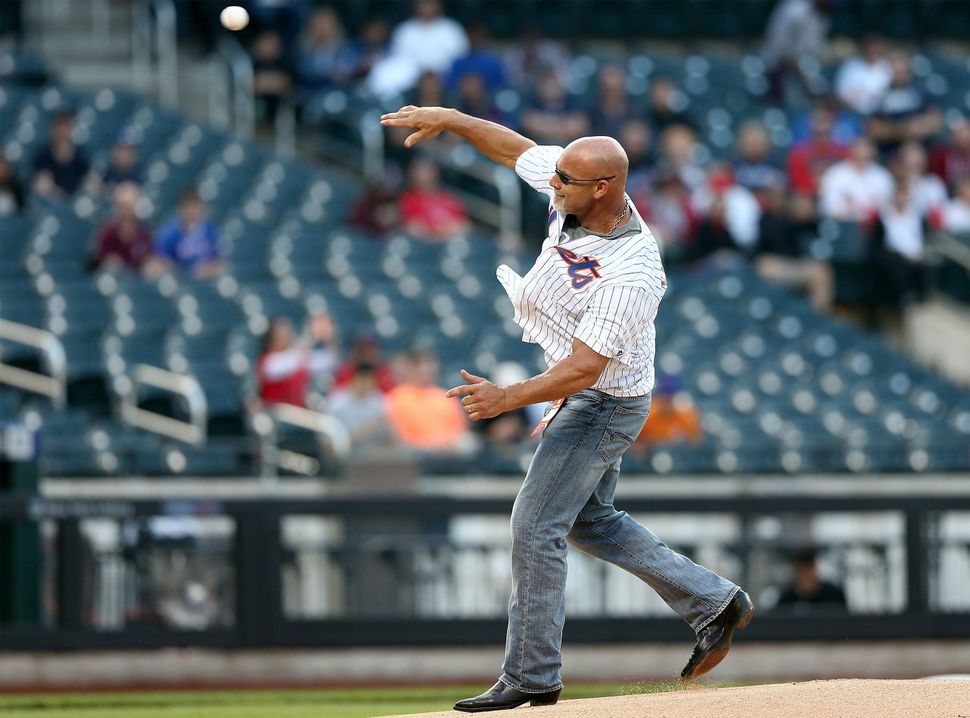 Quick — who is the greatest Jewish athlete of the past 25 years? Stanley Cup winner and two-time NHL All-Star Mathieu Schneider, the all-time career points leader among Jewish hockey players? Or maybe current NHL mainstay Michael Cammalleri, whose 277 goals are the most by any Jewish player? They are both excellent athletes (and nice Jewish boys), but neither is a true standout in his sport. Super Bowl champ Julian Edelman? He was the Patriot’s top receiver in 2014, but he never made a Pro Bowl, and injuries have curtailed his production in the past several seasons.

There’s “Greek God of Walks” Kevin Youkilis the Gold Glove winning, three-time All-Star who holds the major league record for consecutive errorless games and chances at first base. Youk was an integral part of two Boston championship teams but was never really a top 10 player in the league. What about four-time All-Star Ian Kinsler, the Rangers (and Jewish Major Leaguer) career leader in stolen bases, who has two 30–30 seasons under his belt and played in back-to-back World Series? Kinsler posted near-career highs in home runs, batting average, hits and OPS last year, but he’s still not in the same rarified air as Trout, Pujols, Harper or Posey. Let’s take a look at retired Jewish slugger Shawn Green, who finished with 328 career home runs — three shy of Hank Greenberg.

But although never implicated personally, Green’s numbers lose a little luster because they were achieved in the bloated steroid era. Which brings us to Ryan Braun. The first Jewish Rookie of the Year, and the first Jewish MVP since Sandy Koufax, Braun is a six-time All-Star and among the top 10 active players in slugging and fielding percentage. But his reputation has been permanently marred — not only by his admitted use of performance enhancing substances, but also by his behavior in the months following the scandal. Perhaps the strongest candidate for best Jewish athlete of the past quarter century is the three-time gold medalist and two-time world champion gymnast Aly Raisman, who earned her one individual gold medal for a floor exercise that featured ”Hava Nagila” as her routine’s music. But in 2016 she was eclipsed by Simone Biles, who beat out Raisman for the all-around gold and who has already become the most decorated gymnast in American history. No, it’s not Kinsler, Green, Braun or Raisman. In truth, there’s only one Jewish athlete in the past 25 years who became an all-time great, whose name was synonymous with his sport, who beat the best and became the best: Professional wrestling legend Bill Goldberg, who is returning to the ring after a 12-year absence later this month.

Goldberg, the first man to win both the WCW and WWE World Heavyweight titles. Goldberg, whose powerful Jackhammer and Spear finishing moves struck fear into the hearts of giants. Goldberg, whose unheard of 173–0 winning streak was halted only when a villainous opponent sneaked a stun gun into the ring. Goldberg, who beat Hulk Hogan as he began his ascent into pro-wrestling’s upper echelon, demolished The Rock as he achieved it, overcame Triple H to cement it and then defeated Brock Lesnar at WrestleMania XX, only to walk away from the sport, seemingly for good. Goldberg, whose brute strength, athletic agility and charisma in the ring won over even his nice Jewish parents, Ethel and Jed Goldberg (a classical violinist and Harvard-educated OB-GYN, respectively). Goldberg, who didn’t wrestle on Yom Kippur, and who once said, “It’s been a blessing to be a role model for those Jewish kids who never had a Jewish sports hero to look up to, especially those who were too young to remember [Sandy] Koufax.”

Now, for those who claim that professional wrestling isn’t a “real” sport, it’s like I tell my skeptical Hebrew school students when they become fixated on whether the stories in the Torah “really” happened: A Torah story (like the Flood, the Exodus, or Jacob’s wrestling with a mysterious, powerful being) doesn’t have to be “real” to be true. To the student of Torah who finds inspiration, poetry and deep connections in the text, the stories the student encounters — real or not — are full of truth.

Speaking of Jacob, to really understand Goldberg I find myself looking back at the life and times of the original Jewish wrestling champ. It seems like, in wrestling terms, Jacob starts out as a quintessential heel: The name Ya’akov means “heel-grabber,” and is given when Jacob tries to supplant his brother from the moment of their birth. But although Jacob’s initial successes come through trickery, once he leaves the safe confines of home and begins his journey into adulthood, we see that things are not so clear. He dreams of a ladder: In professional wrestling, a “ladder match” is a very dramatic event where the victor must seize a prize (often a title belt) at the top of a ladder (usually after several dramatic falls or beatings with the ladder itself). That dream helps Jacob begin to understand what he “didn’t know” before — that true success will come only through adversity and perseverance. Immediately after this epiphany, Jacob realizes that he, too, possesses great physical strength, as he heaves the enormous stone off the well (reminiscent of a Goldberg Jackhammer) in order to impress his future bride, Rachel. Esau is not the only strongman in the family, after all.

Jacob spends the ensuing years working, growing, building a future for his family as he struggles with an overbearing father-in-law and the challenges of being a husband and father. Finally, he decides to return home, but before he can do so, he must face his past in order to claim his future. This is where the famous wrestling match between a powerful being and a middle-aged strong-man (Goldberg is 49, but some say Jacob may have been as old as 97) occurs. In the final accounting, Jacob’s triumph is not in his besting the Lesnar-like being (in fact, the match ends in a DQ with a bruised and battered Jacob limping off into the sunrise). The triumph comes when the being asks Jacob, “Who are you?” and then blesses him with the answer: Yisrael — the Wrestler. When Jacob hears this, he names the place P’nei El — the Face of God. In wrestling, the Heel is the villain, but the Face is the hero!

As I approach my late 40s and face my own struggles with middle age and parenthood, I look forward to the reappearance of Jacob’s story in the weekly Torah portion, and to Goldberg’s return to the ring, both of which occur within the month. I draw strength and inspiration from both of their heroic journeys, and from their struggles to stay true to their deepest selves.