The Secret Jewish History of Robbie Robertson and The Band 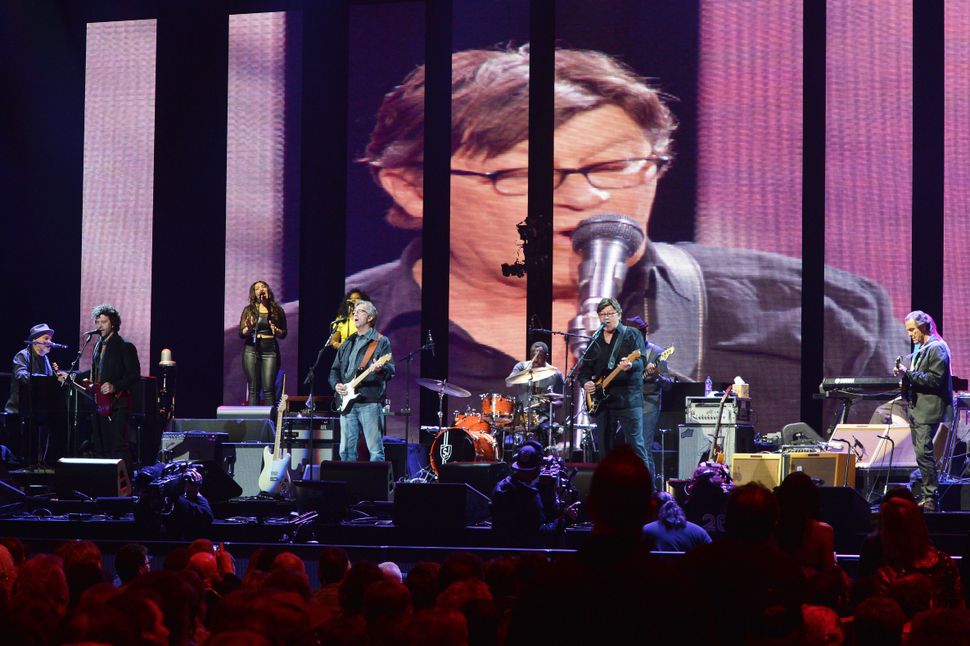 Of the many revealing moments in Robbie Robertson’s terrific new memoir, “Testimony” (Crown Archetype), one stands out for what it says about the legacy of the esteemed, influential rock group, the Band, for which Robertson served as chief songwriter and guitarist; what it says about Robertson’s relationship with his fellow Band-mate, Levon Helm, with whom he sometimes vied for leadership of the group; and what it implies about Robertson’s sense of self-identification.

Tired of the heckling and booing to which the musicians were subjected on a nightly basis while touring as Bob Dylan’s backup band (at the time still known as the Hawks) on the latter’s first electric tour (chronicled in a new, massive 36-CD collection called “Bob Dylan: The 1966 Live Recordings”), Levon Helm confronted Robertson one night to tell him was leaving the group. Robertson recounts the moment: [Helm said,] “I don’t like this damn music. I don’t trust Albert Grossman and these people. And I don’t wanna be around Bob Dylan and all these New York…” Helm didn’t finish the thought, but the implication was clear. Not for the first time and not for the last, Helm, born and bred in rural Arkansas, was about to let loose with an anti-Semitic epithet. The only thing that stopped him, in this case, from completing the phrase “New York Jews,” was that his interlocutor was pretty much one of “them.”

Robertson’s identification as Native American is well known. His mother was a Mohawk who was raised on the Six Nations Reserve southwest of Toronto. In his solo career, Robertson has made several albums of modern Native music; collaborated with tribal musicians and Native American pop artists; appeared in documentaries about Native peoples; and worn his Mohawk heritage on his sleeve. What hasn’t been known until now, however, is the extent of Robertson’s connection to his Jewish heritage.

It wasn’t until his parents divorced, when Robertson was bar mitzvah age, that he learned that James Patrick Robertson was not his biological father. That man was Alexander David Klegerman, with whom his mother had had an affair before marrying Jim Robertson. Before Jaime Royal Robertson, who became known as “Robbie,” was even born, Klegerman was killed in a hit-and-run accident while changing a flat tire on the edge of a highway. Once she banished Jim Robertson from their lives, Dolly Robertson contacted Klegerman’s brothers, Natie and Morrie, whom she had known before she met Alex, to let them know that they had a nephew. The brothers met with Dolly and young Robbie, and they instantly saw the resemblance between Robbie and their late brother. “They quickly pulled me into their world and went out of their way to make me feel like family,” writes Robertson.

That world, as it turned out, was Toronto’s Jewish underworld. His father had been a gambler and a card shark. His maternal grandmother had been a bootlegger. While she supported the family like a one-woman Seagram’s (which itself had roots in Jewish bootlegging), her husband, Robbie’s grandfather, spent his days studying Torah and Talmud. Robertson felt an instinctive connection with his Jewish family. “… Even though this world couldn’t have been newer or more different from the suburbs [where he grew up] or the [Mohawk] reserve [where he spent time with his cousins], I felt quite at home. Maybe it was the mysterious bloodline connection – or maybe they were very sweet and caring people.” Upon meeting his grandfather, the Yiddish-speaking Shmuel Chaim, he writes, “I grew ever more fascinated the deeper they drew me in to my newfound heritage.” While his uncles were supportive of Robertson’s musical aspirations, using their influence to give him a step up in the shady world of Toronto nightclubs, they also wanted him to cover his bases by learning the family trade. For several years, they treated him as an insider in the family business; Robertson even played the role of courier in an uncle’s diamond scam in New York City that, fortunately for him, was aborted at the very last minute.

Later, when on a long drive from Arkansas to Toronto Robertson first spilled the beans about his Jewish background to Ronnie Hawkins, the original leader of the Hawks, and to Helm, the group’s drummer, he was met with a stereotypical reaction: “Wait, who’s a Jew? Let me check and make sure I still got my damn wallet,” said Hawkins. Robertson would be on the receiving end of this kind of talk for years, only further instilling in him a sense of himself as double-outsider in the world. “Yeah, you could say I’m an expert when it comes to persecution,” was his very mordant, Jewish reply.

Robertson learned to live with it, as did Dolly, who became a kind of den mother to all the members of the Hawks, their girlfriends, and their hangers-on. Even though she wasn’t Robbie’s Jewish parent, they dubbed her “Mama Kosh,” as in kosher, and the name stuck. Helm referred to her that way in his memoir, 1993’s “This Wheel’s on Fire,” in which he makes no effort to hide his resentment toward the figures that surrounded him in the Band’s back office – men with names like David Braun, the group’s lawyer; Marshall Gelfand, their accountant; Albert Grossman, their manager; and even Bob Dylan, whose company, Dwarf Music, was the Band’s publisher.

Helm was the only American in the otherwise Canadian quintet, the group whose first two albums, “Music from Big Pink” and its eponymous sophomore release, built a bridge from late-1960s hippie-rock to a more soulful and cerebral 1970s roots music – what we now call “Americana.” He had his own insecurities – he even enrolled in Berklee College of Music during a year off in the mid-‘70s to gain the academic training in music he never had – and a hefty persecution complex to go with it. He also had his own demons – including a nasty heroin habit – and a tendency to fritter away the millions he made on fancy cars, afterwards blaming his empty bank account on Robertson for “stealing” songwriting credits and the royalties that went with them — even though in the nearly four decades of making albums without Robertson following the Band’s “The Last Waltz” farewell concert (celebrating its 40th anniversary this Thanksgiving), Helm failed to produce any songs of merit on his own.

Helm admits that in his final showdown with the Band’s business team, after taking their business judgment to task (they turned down his advice to invest the group’s millions in an Arkansas shopping mall), he “said some other things too. I took the path of greatest resistance. I had an attitude… I made the mistake of cussing ‘em out so bad I had to leave town, and I also believe they later put the IRS on my trail. That’s what kind of people we’re talking about here.” It’s left to the reader to intuit to whom Helm was referring by “kind of people.” With the additional context provided by Robertson’s memoir, the meaning of that phrase gains clarity.

If at times a bit pretentious – he name-drops European film auteurs at the drop of a hat – Robertson comes across as mostly genuine and level-headed. “Levon had been my dearest friend in the world,” he kindly writes, and the first third of the book reads like a love-letter to Helm, whom he viewed as the big brother he never had and for whose voice Robertson wrote songs including “The Night They Drove Old Dixie Down” and “The Weight.” Robertson’s motivation for bringing the group’s touring life to a conclusion with “The Last Waltz” was to protect his Band-mates from the sort of clichéd, tragic rock ‘n’ roll ending that by 1976 had seen Jimi Hendrix, Jim Morrison, Janis Joplin, Tim Buckley and others succumbing to the dangerous lifestyle years before their time. Helm and his other Band-mates, Rick Danko and Richard Manuel, were hooked on heroin and other substances for much of the 1970s, and only by dumb luck had they walked away relatively unscathed from a trail of drug overdoses, flipped cars, neck and other bodily injuries, and near-misses on airport runways. Robertson feared it was only a matter of time before someone’s number came up.

Which indeed is exactly what happened, when, back out on the road at the behest of Helm, touring once again as “the Band” in the mid-1980s, this time without Robertson (and against his wishes), Richard Manuel, deep into drugs and despair, hanged himself in a Florida motel room. In 1999, Rick Danko died of heart failure caused by years of alcoholism, drug addiction, and weight gain. (His son predeceased him, dying at age 17 of asphyxiation in 1989 due to heavy drinking.) After years of battling cancer, Helm died in 2012.

As it turns out, Robbie Robertson was the Jewish mother whose advice the members of the Band should have heeded.

Seth Rogovoy is a contributing editor at the Forward and the author of “Bob Dylan: Prophet Mystic Poet” (Scribner, 2009). He is a recipient of a 2016 Simon Rockower Award from the American Jewish Press Association for excellence in arts and criticism.

The Secret Jewish History of Robbie Robertson and The Band