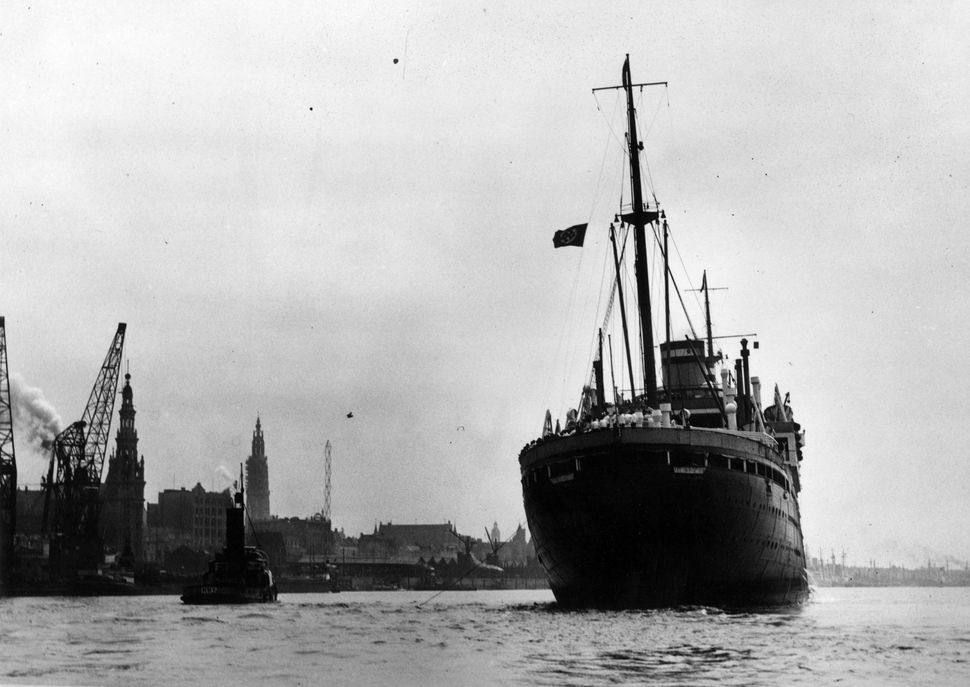 The drama of the St. Louis, the ship that once promised last-minute rescue for hundreds of German Jewish refugees, is compelling enough without fictional embellishment.

In 1939, the trans-Atlantic liner voyaged from Hamburg, Germany, to an abruptly unwelcoming Cuba, a xenophobic (and since apologetic) United States and, finally, back to a reluctant Europe. In retrospect, the St. Louis has come to embody the world’s indifference to the plight of European Jewry — a tough, sad, inculpating symbol of bias and missed opportunity.

In “The German Girl,” his moderately involving debut novel, Armando Lucas Correa fictionalizes the story, telling it from the perspective of a survivor forced to reckon with both cultural displacement and loss.

Correa, who left Cuba in 1991, says that he first learned of the St. Louis from his grandmother. He has since scoured the archives of the U.S. Holocaust Memorial Museum and interviewed survivors (one of whom enthusiastically blurbs the book). “The German Girl” includes an extensive bibliography, as well as a passenger list and photographs from the St. Louis. Framing the narrative are excerpts from actual cables and other primary sources documenting the ship’s tribulations.

The story focuses on Hannah Rosenthal. She is 11 and living in Berlin in 1939 when the novel begins. The narrative switches back and forth between her voice and that of her grandniece, Anna, also 11 when we meet her in the New York of 2014.

The connection between the two is Anna’s father, Louis, a man who died before she was born. Raised by Hannah in Havana, he immigrated to New York, married, and lost his life in yet another tragedy: the 9/11 terrorist attacks. Inevitably, the plot will bring Anna and the aging Hannah together, to the benefit of both.

Hannah represents the handful of St. Louis passengers — 28 of the original 937 — who, because of their identity or travel documents, were allowed to disembark in Cuba. To their discredit, the United States and Canada both declined to accept the ship. Finally, Great Britain, France, Belgium and the Netherlands agreed to take the remaining passengers. But more than 250 eventually perished in the war or in Nazi concentration camps.

Before leaving Germany, passengers on the St. Louis had purchased visas that they believed would allow them to stay, at least temporarily, in Cuba. The country’s shameful rejection of them was followed by an historical cover-up, according to Correa, editor of the magazine People en Español.

“Until now, in Cuba,” he writes in an author’s note, “the tragedy of the St. Louis has been a topic absent from classrooms and history books,” and documents relating to the incident “have disappeared from the Cuban National Archive.”

As both historical tribute and fiction, “The German Girl” is indisputably affecting. But its prose never quite soars, and Correa relies on clunky historical and personal parallels. He links the Cuban Revolution, which persecuted Jehovah’s Witnesses as well as political dissidents, to the anti-Semitic excesses of Nazi Germany. He gives Anna a romance that evokes Hannah’s entanglement with her best friend, Leo Martin; makes both characters photographers, and underlines the notion of the two as doppelgangers. “I wake up,” Anna says at one point, “but still don’t know who I am: Hannah or Anna. I feel like we’re the same girl.”

Hannah’s devotion to Leo, and her vow to him, evokes the melodramatic love story at the heart of James Cameron’s Oscar-winning 1997 film “Titanic.” Her adventures in prewar Berlin and on the St. Louis recall Anne Frank, another adolescent unable to exit or fully comprehend a world askew. Like Frank, Hannah encounters both heroes and villains, and traverses the typical Bildungsroman arc from innocence to experience.

In Berlin, Hannah, Leo and their families face mounting anti-Jewish regulations and the threat posed by the men they call “the Ogres.” As their fathers struggle to contrive an escape, the children are neglected and feel the sting of their “impure” status. “Nobody heard my cries anymore; nobody bothered about them,” says Hannah, whose mother — like Anna’s, decades later — seems to have permanently taken to her bed.

Meanwhile, the children enjoy the run of the city they still love. Once on the St. Louis, luxurious accommodations and the gracious tone established by the ship’s German captain, Gustav Schroeder, prefigure a favorable outcome. But that passage turns out to be a last gust of happiness and freedom before Hannah’s family is shattered.

Navigating shifting political currents, Hannah will stay in Havana with her mother, neither of them fully reconciled to her fate. Hannah’s younger brother, Gustavo, will become a rabid revolutionary who “harangued [her] about social rights, tyrants, corrupt governments.” Her mother predicts, correctly, that another state of terror is imminent.

Lightened only by a stint as a pharmacist and a single, passionate, abortive romance, Hannah’s existence seems almost unbearably sad. “Her real life,” Anna will conclude, “took place in Berlin and on board the St. Louis. Most of the rest has been a nightmare.” Newly connected to her family by both Hannah’s memories and her photographs, Anna will become the guardian of a suppressed and tangled history — a fictional stand-in for the rest of us.

This article has been updated and originally appeared on December 6, 2016.