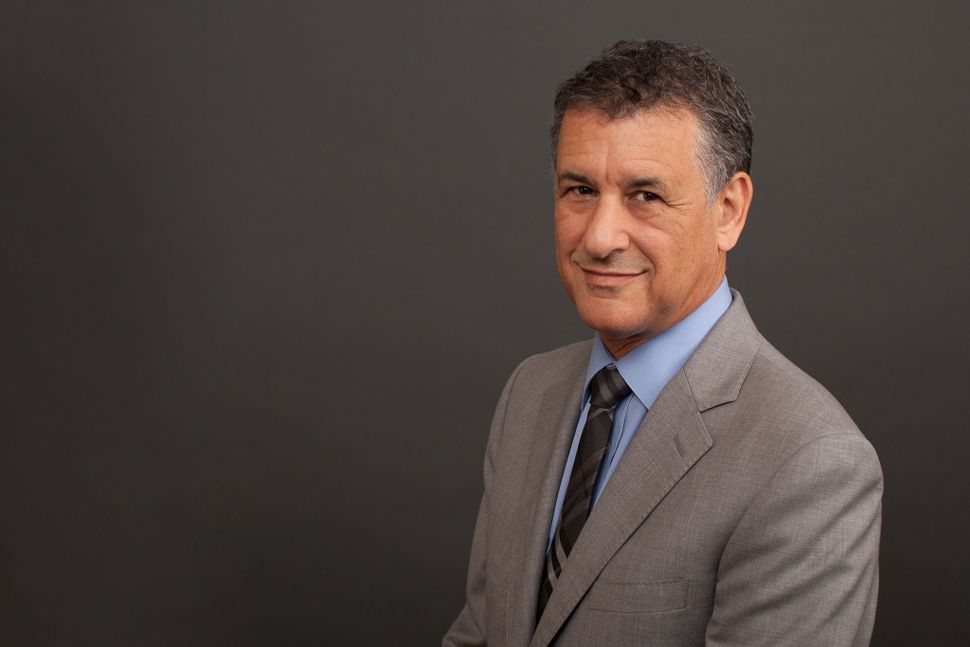 Driving his 20-year-old Mercedes-Benz up and around the winding roads toward his house in the hills in a semirural area of San Francisco’s East Bay, Daniel J. Levitin is an enthusiastic guide to the abundant variety of trees in his neighborhood: California live oak, redwood, Pacific madrone. Suddenly, he brakes while making a turn and puts the car in reverse so that he can check out and describe what’s happening at a telephone pole.

The wood pole is pockmarked with holes, dozens of them. The pole, Levitin explains, has been adopted by acorn woodpeckers, which drill holes to either access or store their stash. One woodpecker stands alone on top of the pole. Another lands a few feet away, and Levitin is delighted. “Okay, there’s his wife,” he says of the second bird. “They pair bond.” Either it’s time for an acorn meal, or the spouse is keeping lookout while the provider partner is putting away a snack for another family meal.

Bird-watching is one of his interests; trees are among his passions. Neuroscientist, musician, author, record producer, teacher and dedicated student and practitioner of Judaism, Levitin is one of those multifaceted people who deserve the often overused description “polymath.” His previous books, “This Is Your Brain on Music: The Science of a Human” and “The World in Six Songs: How the Musical Brain Created Human Nature,” were best-sellers, adept blends of his academic research and his work as a rock and pop musician, producer, engineer and record executive. He has overseen production of greatest hits albums for Steely Dan and Stevie Wonder; he has played saxophone with Sting, and he has scanned Sting’s brain at the Laboratory for Music Perception, Cognition and Expertise, Levitin’s base for the past 16 years at McGill University, in Montreal. Levitin is winding down the lab and returning home to Northern California, where he will be a distinguished faculty fellow at the University of California, Berkeley beginning in March 2017. He is also dean of arts and humanities at California’s Minerva Schools at KGI, an undergraduate four-year program that combines world travel and online learning.

His new book, “A Field Guide of Lies,” is a timely primer on how statistics, polls and information presented as facts can be used by “lying weasels” to obscure the truth. Though politicians and biased media carry responsibility for trying to “bamboozle” the public, Levitin also addresses the careless or lazy critical thinking skills many have developed in the era of internet information overload.

“A cornerstone of critical thinking is that you think like a Bayesian,” he said, referring to the evidence-reliant statistical analysis based on the ideas of the 18th-century English theologian and mathematician Thomas Bayes. “You update your understanding of the world as new information comes in. You might have to change your mind. But now there is a core group on both sides; if new bad information comes out about their candidate, they say, oh well, stuff happens, and if good information about the other candidate comes in, they refuse to evaluate it. The loss of open-mindedness is the problem.”

Levitin leavens his scientific and statistical analysis with colorful words and colloquial expressions so that the opening section of “Lies,” with charts and diagrams and graphs, features headings such as “Hijinks With How Numbers Are Reported,” and “Axis Shenanigans.”

Levitin is not just a creative and talented guy who happens to have been born Jewish; Judaism is an essential part of his life.

As with almost everything he achieves, Levitin is quick to credit others. Even the motivation for writing “Lies” seems less to present his mathematical and critical thinking skills than to pay tribute to a book published in 1954 called “How To Lie With Statistics” by Darrell Huff. “I love that book, I’ve read it about six times,” Levitin said. “‘A Field Guide to Lies’ was very much influenced and based on that book. It doesn’t pretend to be an exhaustive resource on statistics. It’s just this one wonderful writer’s take on how stats can be manipulated to make people believe in things that aren’t true.”

One problem, Levitin writes, is that “we have created more information in the last five years than in all of human history before.” “Plausibility” is the opening chapter of the new book, and this assertion sounds plausible. But it made sense to ask him how he knew that.

“From Google,” he said with a laugh. “No, not from a Google search, but by visiting Google, and talking to research scientists at Google. I confirmed that with data scientists at Microsoft and Yahoo and Cisco.”

Levitin keeps tech and science jargon to a minimum in his books, preferring offbeat, comical and slightly archaic words like “bamboozle” and “shenanigans” and phrases like “lying weasels.”

“I have this set of words that sound colloquial and funny to me, and have a nice sort of mouth feel,” Levitin said. He consults often and in depth with his editor, Stephen Morrow, who is Dutton books’ executive editor and has worked with Levitin on all his books including the 2014 bestseller “The Organized Mind: Thinking Straight in the Age of Information Overload.”

“He loves language like I love language,” Levitin said. “We’ll spend an hour talking about a single word. We’ll talk about whether the word is exactly the right word, what it connotes and how it’s going to hit the reader. He’s made me sensitive to setting up a tone where I’m meeting the reader at a restaurant and I’m sitting across a table and we’re just having a conversation. Not a lecture, but a conversation.”

That’s what it is like to interview him in his dining nook at home, where he seems casual, knowledgeable, humble. Levitin’s achievements make one wonder what the conversation must have been like at the dinner table growing up in a family of super-achievers. His sister, Shari Levitin, is a sales strategist, entrepreneur and a motivational speaker. She is the author of “Heart and Sell: 10 Universal Truths Every Successful Salesperson Needs to Know.”

Levitin’s father is a business executive and an academic professor of clinical finance and business economics at the University of Southern California’s Marshall School of Business; his mother, Sonia Levitin, is one of the most renowned authors in the field of young adult literature and has written more than 40 books. She’s also an artist and playwright. Her first book, “Journey to America” (1970), is based on her family’s escape from Nazi Germany in 1938 and won a Jewish Book Council National Jewish Book Award.

Rabbi Hayyim Kassorla, whom Daniel calls “my rabbi,” describes Levitin’s parents as “accomplished people who happen to be committed Jews.” Levitin is not just a creative and talented guy who happens to have been born Jewish; Judaism is an essential part of his life.

Levitin and Kassorla, now the spiritual leader of Congregation Or VeShalom, a Sephardic congregation in Atlanta, met about 30 years ago in San Francisco, when both were in their 20s. Kassorla was the new rabbi at Magen David Synagogue. Levitin was a long-haired rock musician who had found a place in the live San Francisco early 1980s punk rock scene.

Levitin spent most of his 20s as a performer, studio engineer, producer and executive in the music business. He was successful enough to delay even getting his undergraduate degree (from Stanford University) until he was almost 35, in 1992. He got his Master of Arts and a doctorate from the University of Oregon. Years earlier he had dropped out of Stanford and Massachusetts Institute of Technology and spent a year living on the Oregon coast. By day he was a cook at a Sambo’s restaurant; he practiced guitar for eight hours a day. At night he was the lead guitarist in a country bar band called The Alsea River Band.

The past 25 years have featured what for some would be a lifetime of academic achievement (he is 58) with lectures, consultancies, professorships, fellowships, peer reviewed papers, TED talks, discoveries and breakthroughs in areas of music cognition. He has made his own custom guitar amplifiers, used by Joe Satriani and the Blue Öyster Cult, was a consultant to the Grateful Dead on their much-praised sound systems and was an early, influential researcher in computer science.

“I became a cognitive psychologist because I met a bunch of teachers I really liked,” he said. “I’m motivated and single minded, but the social part of it is important.”

That focus and the desire for being part of a community are also factors in Levitin’s dedication to Judaism.

Growing up, Levitin’s family attended the one synagogue (Reform) in the then-rural part of Northern California where they lived. “It was mostly agricultural and cows; there weren’t many Jews around,” he said. Hebrew school, Sunday school, bar mitzvah, singing in the choir: That was Levitin’s brain on Judaism growing up. In his freshman year of high school, his family moved to a “Waspy” suburb of Los Angeles, where, despite culture shock, he found friends and purpose playing saxophone in the school marching and concert bands. When he was in his 20s he and his sister accompanied their mother to Israel, where she was researching a book. “I got interested in Jewish history at that point, and I met some Orthodox Jews at the Wall who asked me to put on tefillin. I did not know what they were. When I got back to Northern California where he had returned after high school] I decided I wanted to learn more about Judaism.”

His quest brought him to a Jewish bookstore in San Francisco, where he bought the Jewish Publication Society chumash, and that of Rabbi Aryeh Kaplan. The bookseller told him about a weekly class being run by Kassorla. (“My grandmother’s family came from Spain, so I had some warm feelings about the Sephards,” Levitin said.)

“He is very inquisitive, very friendly and very giving,” Kassorla said. “He helps a lot of people, although he doesn’t want to take credit for it. I’ve had times in my life when I’ve needed a comforting word or a pat on the back, and Daniel was always there. He always knows what to say: a funny story, a joke, a word of Torah.”

“The rabbi and I became friends. He assisted at both my weddings, and he taught me an enormous amount of things, and to build my library with Jewish books,” Levitin said. “Davening, tefillin, how to run a service, memorize the Amidah, how to function as an Orthodox Jew in every respect.”

Levitin and his second wife, Heather Bortfeld, who is also a cognitive psychologist, read Torah together. “We read the Kaplan version,” Levitin said. “She didn’t grow up with any religious training, so she’s fascinated to learn about these things that are part of popular culture, the origin of myths and stories, like Jonah and the whale. We enjoy reading it together so that when we are with observant Jews who know what to do, the blessing over washing your hands, and the bread, we’re able to participate, which we find beautiful.”

Levitin says he is also comfortable enough with the liturgy to be able to be engaged in any synagogue service (except perhaps for the most stringent or exclusive sects). It is no surprise, then, that this scientist, musician, author — did I mention he also had some success performing as a stand-up comic? — has the potential to achieve in almost any category.