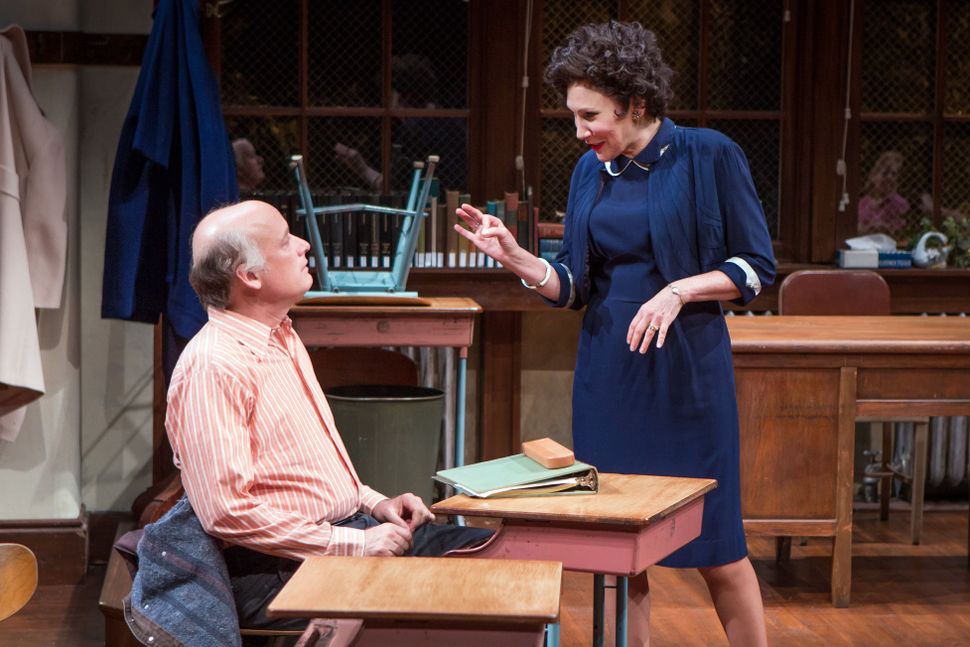 The three women who shriek with excitement when they find themselves in the same classroom are thrilled to see each other — they’re Sisterhood ladies. It’s Levittown, Long Island, in 1967, and they’ve signed up for an adult-ed class in creative writing. It’s clear they don’t really want to be there, both because they tell us — Current Events was full, and so was French Cooking — but also because this isn’t their world. The shellacked hair, the casual sniping, it all makes clear that they’re not looking for introspection.

“The Babylon Line,” Richard Greenberg’s latest, opened tonight at Lincoln Center Theater’s off-Broadway Mitzi E. Newhouse, and it examines the six students and one teacher in the class. It’s a funny, smart, gently revelatory play that digs beyond the commonplace insight that great depths can lurk behind the conformity of suburbia — though it does make that point — to also consider the unimaginable, unpredictable paths our lives can take. But as much as it’s a meditation on ennui and reinvention, on the power of self-expression and the merits of continuing education, it’s also a portrait of a very recognizable suburban-New York world. “They’re not nice,” the mysterious southerner in the class says of her cliquish neighbors, “these Jewish ladies.” They’re not, Greenberg knows. But they also have their reasons, his play points out.

The prolific Greenberg is best known for his 2003 Tony-winner, “Take Me Out,” about a gay baseball player. His most recent, “Our Mother’s Brief Affair,” at the Manhattan Theater Club last season, considered the possibility that a suburban matron had had a secret affair with, of all people, David Greenglass, the man who helped send his sister, Ethel Rosenberg, to the electric chair. Greenberg’s métier is suburban Jewry, or gays, or often some combination thereof. Here, he is working in the former vein, and he is excellent.

(Speaking of playing to type: With “Babylon Line” at the Newhouse and “Oslo,” about the Israel-Palestinian accords, upstairs at the Vivian Beaumont, LCT has finally apotheosized into an Equity-contract 92nd Street Y. Mazel tov.)

Their teacher is Aaron Port (Josh Radnor, thoughtful and reflective), who lives in Greenwich Village with the wife he doesn’t like and fancies himself a writer though he hasn’t published anything in years. He reverse-commutes to make a few bucks teaching, and he grew up just a few stops down the Babylon line. He becomes transfixed by pretty, intelligent Joan, even infatuated by her.

Joan is the apparent great question of the play, waiting to be resolved — who is she, how did she end up in Levittown, and why does she stay there? She’s coy and flirtatious but consistently opaque. “Why do you live here?” Frieda asks her accusingly. “It’s a simple question. What does Levittown offer you? And what do you offer it in return?” Aaron is equally opaque: Why does he do this job he clearly disdains? Why is he living this life?

But Greenberg’s play successfully makes all the other characters compelling enigmas, too, and provides them all with their own shades of mysterious and unexpected motivations. You want to learn more about all of them, and, when you do, the discoveries make them more interesting, not less.

Terry Kinney’s direction builds mystery and tension, and Richard Hoover’s set is an expert recreation of a suburban-New York high school. (Though I would matriculate in a different suburb and a quarter-century later, the specific models of desks and chairs on stage brought me immediately back to Trigonometry, a remembrance of math past.) There is real chemistry between Reasor and Radnor. And all the performances are layered and complex, most notably Graff’s terrific Frieda and Wood’s reticent Hassenpflug.

But what shines through most clearly is Greenberg’s witty, carefully structured writing. The character’s stories, while never overcomplicated or confusing, ultimately weave together (and even weave into at least one other Greenberg play) in ways you don’t see coming, in ways that are coincidental or convenient or inconvenient. It’s a reminder that nothing is ever final, that life changes, that stories change, that there’s always a chance to rewrite your own story. For a play about writing — or, if you prefer, among the People of the Book — it’s not so bad to have the script be the star.

Jesse Oxfeld has written about theater for Entertainment Weekly and the New York Observer.