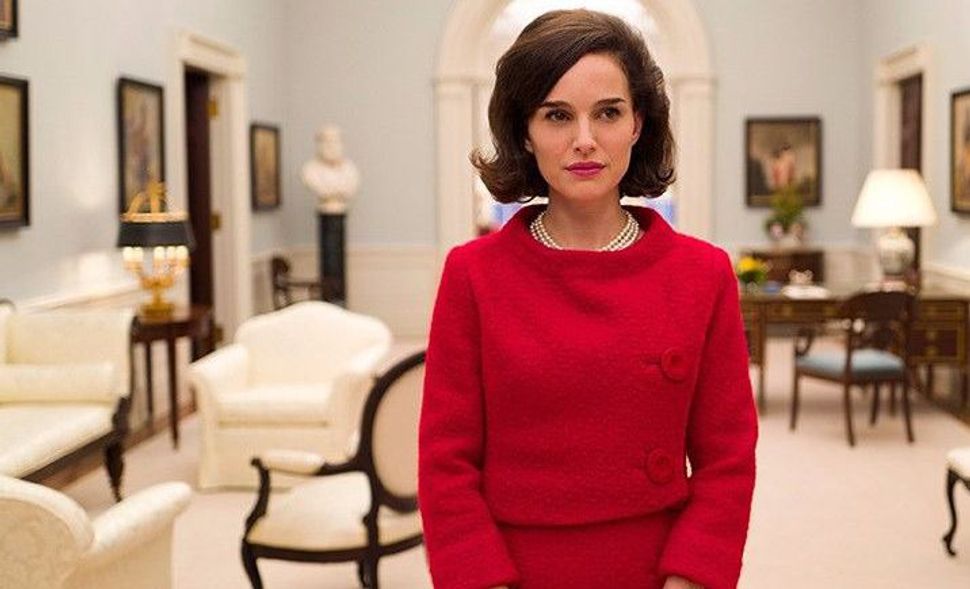 Now that Jackie Kennedy is being portrayed onscreen by the most famous Israeli-born actress in the world, it’s worth looking closely at the former first lady’s life to pick up the Jewish strands she left behind.

1) Although Jacqueline Bouvier boasted Anglo-Irish and French ancestry, that didn’t stop some from falsely claiming Jewish heritage for her — most notably her cousin and step-sibling Gore Vidal, who often repeated the widely debunked story that her mother, Janet Lee, was really Janet Levy. In Vidal’s telling, Jackie’s grandfather changed the family name from Levy to Lee in order to become a vice-president of the J.P. Morgan bank. Jackie didn’t help things by making up her own story about her grandfather, claiming he was a Maryland-born veteran of the Civil War, when in fact he was born in New Jersey in 1852. In any case, the Lee-Levy myth has no basis in truth, but persists as evidence of a Jewish worldwide conspiracy on extreme right-wing websites. Jackie did, however, eventually have a Jewish granddaughter: Rose Kennedy Schlossberg, the daughter of Caroline Kennedy and Jewish artist Edwin Schlossberg. So while Jackie wasn’t Jewish at all, she was nevertheless a “bubbe.”

2) Rose Kennedy Schlossberg did, in her own manner, channel her family’s challenging history: Schlossberg – who is said to bear a remarkable resemblance to her maternal grandmother – launched a web-based comedy series earlier this year called “End Times Girls Club,” a six-part satirical take on apocalyptic survival from a woman’s point of view.

3) For much of her existence in the public eye, Jackie Kennedy was known as a fashion icon, and the designer outfits she wore were the object of obsessive, almost Talmudic study and commentary. Perhaps the most famous clothing item she ever wore was the pink Chanel dress she donned on November 22, 1963. Against the wishes of everyone around her, Jackie insisted on wearing the blood-soaked suit after President Kennedy was shot, during the swearing-in of Lyndon B. Johnson and for the flight back to Washington, D.C., with her husband’s body. The House of Chanel was cofounded by French-Jewish businessman Pierre Wertheimer and is now owned by his grandsons Alain and Gérard Wertheimer. The company was cofounded by its namesake, Coco Chanel, who was a notorious anti-Semite and Nazi collaborator.

4) The soundtrack to the Kennedy White House was literally written by the Jewish songwriting duo of Alan Jay Lerner and Frederick Loewe. Just a week after JFK’s assassination, Jackie Kennedy told an interview that the late president would relax in the East Wing by playing the title track to the Lerner and Loewe Broadway musical, “Camelot.” It was in this interview that Jackie gave birth to the metaphor of the Kennedy presidency as “the Camelot Era.”

5) In “The Persistence of the Jewish American Princess,” a New York Magazine article published on March 22, 1971, and one seemingly devoid of irony, author Julie Baumgold wrote, “Jacqueline Kennedy Onassis is a Jewish princess. She expects to be treated as a noble, she buys in multiples (almost hysterically in multiples). She has safe taste, chooses an item like shorts when it is peaking. She is smoky looking, with the illusion of darkness all around.”

6) Jackie Kennedy lived out her years with Maurice Tempelsman, a Jewish refugee from Nazi Germany, whom she knew as early as the late-1950s, before she had even met John F. Kennedy. A Belgian-born, Yiddish-speaking diamond merchant and financier, Tempelsman’s liberal Democrat associations included Adlai Stevenson, who, after his second presidential bid, traveled with Tempelsman to meet African leaders in 1957, and one-time Kennedy speechwriter Theodore Sorenson, who later became Tempelsman’s lawyer. The two began their lengthy relationship – the longest and most enduring of Jackie’s life – in 1980, living together and inseparable (although never legally married) until Kennedy died in 1994.

And if you’re still wondering about the actress and the movie from the first line of this article, it’s Natalie Portman, who stars as the title character of the new film, “Jackie.”