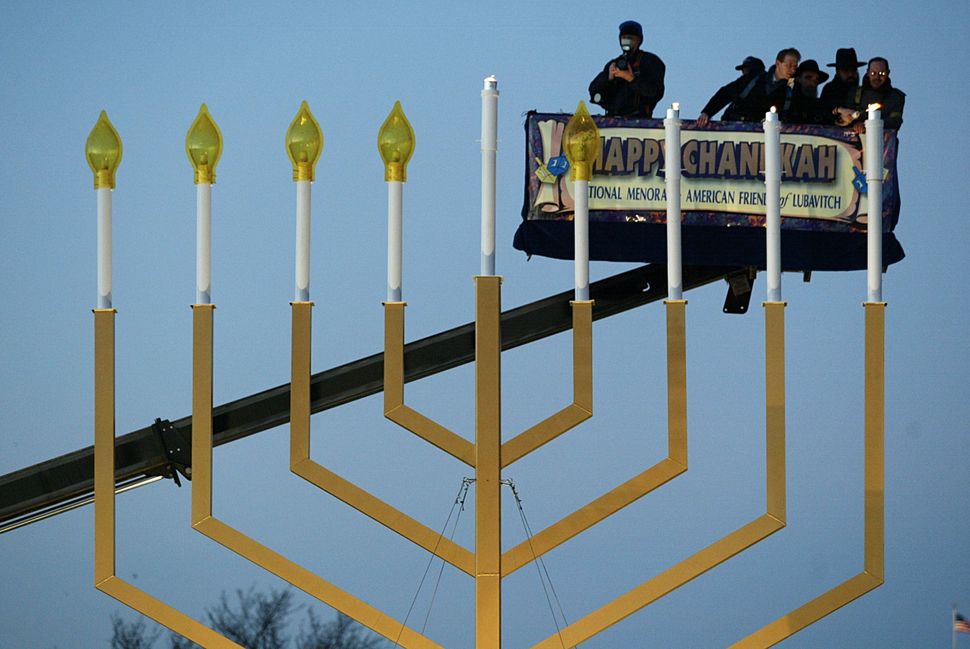 Each year, when Hanukkah rolls around, I feel a certain sense of unease.
Hmmm. A battle between Jewish zealots and Jews who wanted to partake of the richness of the Greek world around them.

I have a feeling I’m on the wrong side of this, Hanukkah-wise.

“You like wine?” my friend John, who is of proud Greek descent, asked me the other day, as he chortled. “You like theater? You like philosophy? You’re with us!”

He’s right. I feel more in tune with the bad guys of Hanukkah, the Hellenizers, than with the story’s traditional heroes, the Maccabees.

But if I’m on the wrong side, it’s a crowded one. “I think 90% of American Jewry would be with you,” said Rabbi Max Weiss, my rabbi at Oak Park Temple, outside Chicago, who acknowledges his own Hanukkah issues.
“Hanukkah has always been a controversial holiday, since rabbinic times,” he said, so much so that the rabbis of the Talmud reframed the story to focus on the miracle of the lamp oil lasting eight days. “It’s the only holiday that celebrates a military victory — and the Maccabees were zealots.”

Hanukkah, oh, Hanukkah — my own December dilemma. How can I celebrate a holiday that commemorates a defeat of Jews who wanted to live in a cosmopolitan world — in short, Jews like me?

But first things first. Which Hanukkah story are we talking about? Because actually, there are two.
The first, which many of us learned in Sunday school, tells of a rebellion of a group of Jews against a Syrian Greek king who forbade Jewish practice and defiled the Jerusalem temple by turning it into a Greek temple.
The Maccabees, led by a group of brothers of that name, defeated the far more powerful Antiochus IV. They recaptured the temple and rededicated it to God. Hanukkah celebrates that rededication.

“That’s kind of the official story as Jews remember it,” said Steven Weitzman, director of the Katz Center of Advanced Judaic Studies at the University of Pennsylvania, and a specialist in the Hebrew Bible and the origins of Jewish culture. “But scholars have come up with a different understanding of what really happened.”
In the 1930s, Elias Bickerman, a leading scholar of Greco-Roman history and the Hellenistic world, took a closer look at the spare scriptural account of Hanukkah — two texts that are part of the Catholic Bible but not the Jewish one. They tell of a Jewish rebellion story.

But the texts are contradictory in parts, and have clear political agendas, Weitzman said. And Bickerman noted that it was the Jewish high priests who brought Greek practices into the temple. Reading between the lines, he concluded that the battle was among the Jews.

“The Maccabean revolt, according to this interpretation, was not a revolt but a civil war between cosmopolitan Jews who wanted to assimilate to Greek culture and religious zealots who wanted to defend the original tradition,” he said.

So in this telling, which has been widely accepted, Hanukkah celebrates the victory of zealots over, essentially, Reform Jews.

And this Reform Jew should light candles because?

I put the question to several scholars. Could they work a Hanukkah miracle and get this liberal Jew to love Hanukkah?

Several hauled out the big guns, and presented this way of looking at it:

The story of a battle among Jews over assimilation actually gives it meaning far beyond the report of which side won.

“It really makes this about how Jews respond to the world outside,” Weitzman said.

It is a central question, said Kenneth Seeskin, a professor of philosophy and Jewish civilization at Northwestern University (though he still has mixed feelings about Hanukkah).

“In a way, you can say this is a foundation of an issue that will be with Jews for a long, long time — the balance between identity on the one hand and complete assimilation on the other,” Seeskin said.

This question has always faced Judaism, said Hal Lewis, president and professor of contemporary Jewish studies at the Spertus Institute for Jewish Learning and Leadership. “Jews as far back as the biblical period were in contact with other cultures,” he said. “The evolution of Jewishness has always been about Judaizing certain external elements and making them our own.”

And “there has always been a tension — how much do we incorporate and what is a bridge too far,” he said. The founders of Reform Judaism, he pointed out, faced accusations of abandoning Judaism, as did the Hellenizers.
But all that is reason to celebrate Hanukkah, he said, not to abandon it.

“The tension between those trying to let more of the surrounding culture in versus those that would rather let less in — that’s a robust debate,” he said. “I love the tension. I think we should celebrate it, revel in it, even light eight crazy candles because of it.”

Still — what about my admiration for Greek culture, the very thing the Maccabees fought against?

That only means I am in excellent company. Judaism has a deep and strong bond with the Greek world, which was the culture of the ancient world.

One of the most important early translations of the Hebrew Bible is the Septuagint — a translation into Greek. Philo of Alexandria, the Hellenistic-Jewish philosopher, wrote in Greek. When the historian Josephus wrote the first account of the Jews’ celebration of Hanukkah, he wrote it in Greek. The word “Judaism” itself is Greek.
“The rabbis of the Midrash were very comfortable living in the broader Hellenic world,” said Rabbi Burton Visotzky, professor of Midrash and interreligious studies at the Jewish Theological Seminary, and author of “Aphrodite and the Rabbis: How the Jews Adapted Roman Culture To Create Judaism as We Know It,” published this past September.

“There are more than 3,000 loan words from Greek in the Talmud. Synagogue, Sanhedrin — those are Greek words. You go up to the bimah — bimah is also a Greek word. We don’t even notice how Hellenized we are.”
Those anti-Hellenizer Maccabees? “Their coins have Greek written on them; some of the Maccabean rulers took on Greek titles,” Weitzman said.

That most beloved of Jewish holidays, Passover? “The custom of a special meal where you ask questions and you tell stories — that’s based on a Greek banquet called the symposium,” Weitzman said.

That sound I hear is my friend John shouting “Opa!”

“The celebration of Hanukkah is not a rejection of Hellenization,” Visotzky said. “It’s a question of how much [to adopt], and that is a question Jews grapple with to this day. The real story of Hanukkah is how we find that balance.”

Okay, but what about hypocrisy? Can a fairly assimilated Jew really celebrate a holiday that can be seen as arguing against assimilation?

Actually, it turns out that Hanukkah has done some pretty heavy assimilating itself — and that’s not even mentioning the modern tradition of sending Hanukkah cards.

Consider the story of one day’s worth of oil miraculously lasting eight days, which the rabbis of the Talmud, uncomfortable with celebrating a military victory, assigned to Hanukkah.

“It’s a story told 500 years after the Maccabees, and in a totally different country — Iraq,” Visotzky said.
And Hanukkah bears more than a passing resemblance, Visotzky said, to a Roman pagan holiday called the Saturnalia.

A celebration of light held when the days stop getting shorter and light starts to return?

“I laugh every time people say we give gifts on Hanukkah only because of Christmas,” Visotzky said. “The reality is, it’s because the Romans gave gifts during their Saturnalia that we all give gifts. It’s our common Hellenistic background.”

But to him, that’s another reason to celebrate Hanukkah: As a celebration of both a Greco-Roman heritage and our Jewishness, it proudly proclaims us as part of both.

“You not only don’t have a problem with Hanukkah — it should be an affirmation of your Judaism,” he concluded triumphantly.

Things are looking up for that menorah in our basement. Max Weiss, my Reform rabbi, even offered a defense of religious zealotry. Extremism can keep embers of a tradition alive at times when they are threatened, he said.
Jonathan Sarna, professor of American Jewish history at Brandeis University and chief historian of the National Museum of American Jewish History, delivered the coup de grace.

The solution for my discomfort with the history behind Hanukkah: Ignore it.

The meaning of a holiday, he said, is determined by the people who celebrate that holiday. And Jews have not made the Maccabees-vanquish-Hellenists story the central focus of the holiday; they have chosen Jewish identity and freedom.

For the early Zionists in America, “the Maccabees became like George Washington fighting for freedom,” Sarna said. “At a time when anti-Semitism is growing in America, Hanukkah is really a moment of Jewish pride.”

Oh, and one more thing. That bummer of a feeling that descends on many of us when the days are at their shortest?

Enter the Festival of Lights.

Hanukkah brings light into a dark time of year — as does Christmas — and marks the turning point when the days start to lengthen again, so we can look forward in hope.

Well, it’s a Hanukkah miracle. This Hellenizer is sold.

I’ll be lighting the candles this year, with a new respect not just for the holiday but also for the way we keep studying, reinterpreting and renewing Judaism.

Come on over for latkes, John, and bring some spanakopita.

Barbara Brotman is a former columnist for the Chicago Tribune.