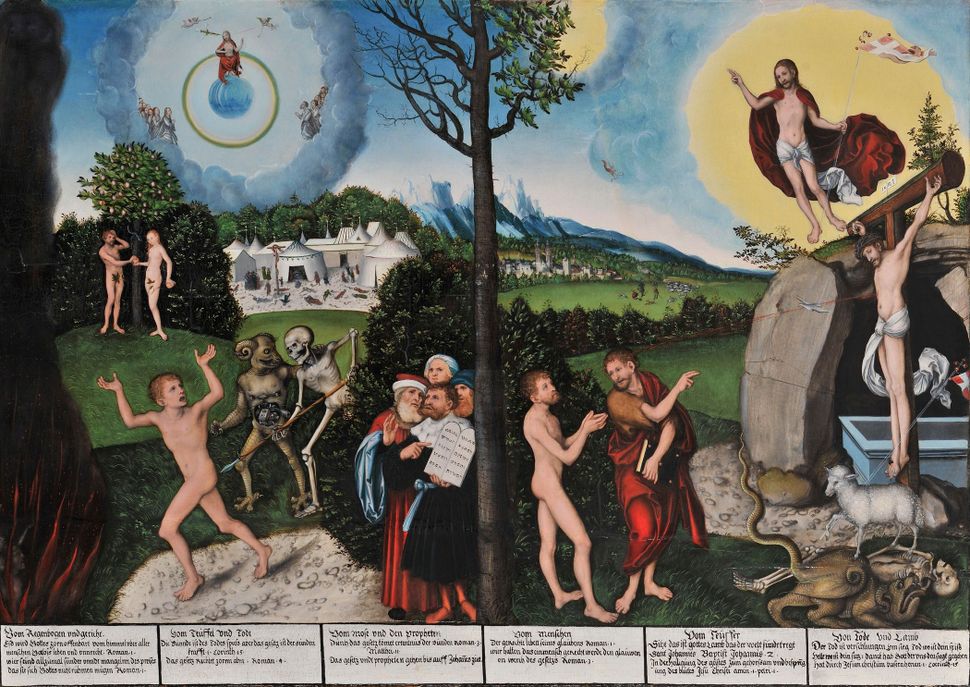 Martin Luther’s spoon, which he gifted to his friend, a Hebrew specialist who helped him translate the Old Testament in the 1520s, is unusual, to say the least.

Said to come from a unicorn’s horn, it was meant to protect against poison. The spoon folds up and is secured with a pin shaped like a demonic head. The spoon, which Germany’s Wartburg foundation owns, is one of many artifacts associated with Luther and his time that appear in the Minneapolis Institute of Art’s exhibition, “Martin Luther: Art and the Reformation,” timed to coincide with the 500th anniversary of Luther’s 95 Theses, penned in 1517.

In Minneapolis, the peculiarity of the spoon emerges elsewhere as well. On one hand, there is the Martin Luther who took a deep interest in Jews and Judaism, as he fought against what he considered the corruption and greed of the Catholic church. But there’s also the Luther who spewed vicious anti-Semitic conspiracy theories in his writings.

The Jewish man caricatured in the woodcut on the title page of a printed version of Luther’s “A Treatise on Usury” has a large, hooked nose. He may be counting money, surely usuriously lent, on his fingers, and the caption reads, “Pay or give interest, for I long for profit.”

In 1543’s “On the Jews and Their Lies,” Luther called for the expulsion of Jews and the destruction of their synagogues. “He would not allow, however, their killing,” according to the catalog.

Hebrew plays more of a role in this exhibit than one might assume. Luther, who believed that understanding the Hebrew bible was essential to understanding the New Testament, purchased an elementary Hebrew grammar book in 1506, then a Hebrew bible, which he carried with him his entire life. The exhibit also includes a Hebrew lead type (the letter mem), which dates from the late 16th or early 17th century.

The type attests to relatively positive Jewish-Christian relations. The mem, found in a latrine, is from the print shop of Johannes Krafft the Younger, who collaborated with a Jewish proofreader to publish Hebrew bibles in the late 1580s.

The bulk of the artifacts, however, are lowlights. A catalog entry for a wall fountain fragment, which contains a caricature of a Jew, could be a stand-in for the lot. According to the exhibit catalog, “It can be seen in the context of the emergence of viciously anti-Semitic caricatures and tropes, which haunt us to this day.”