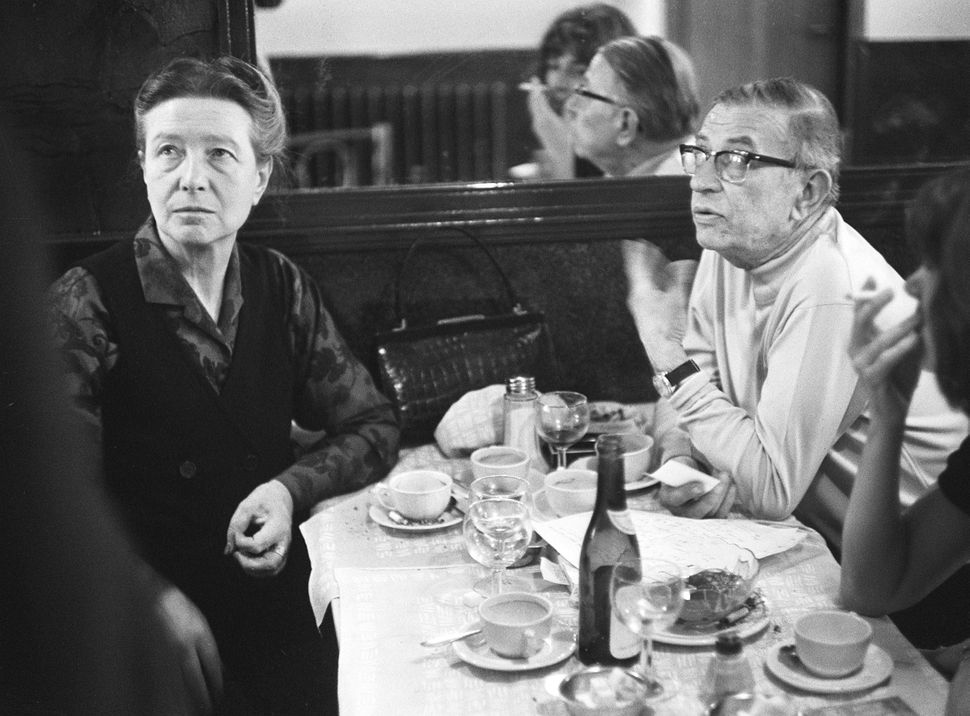 Scholars from around the world convened in Jerusalem this week for a conference marking the 70th anniversary of the publication of Jean-Paul Sartre’s influential “Anti-Semite and Jew.” Originally published in French as ”Réflexions Sur la Question Juive” and translated widely, the book-length essay was written just after Paris was liberated in 1944.

The English translation by George J. Becker, first published in 1948 and reissued with a preface by Michael Walzer in 1995 has its ardent fans — Rabbi Arthur Hertzberg called it an “acknowledged classic.” Yet both Sartre’s essay and Walzer’s introduction are still attracting plenty of commentary and critique.

Sartre famously begins by stating that anti-Semitism is often viewed as an “opinion,” and that very little attention has been directed toward anti-Semites themselves. He then offers four categories of individuals he observes in 1944 in France: the anti-Semite, the democrat, the inauthentic Jew and the authentic Jew. Most of the book focuses on the first and third of these categories: the anti-Semite and the assimilated Jew. In the 1940s, Sartre was primarily writing plays, and these four types are often seen as four “characters” in a drama.

Walzer, in his introduction, points out that Sartre did no research, and that the book was probably written in a great hurry — noting that excerpts appeared in December 1945, before it was clear just how many French Jews were murdered. Sartre’s book has also been faulted for ignorance of Judaism’s history and religious content; Sartre seemed to use personal experience to make his points, drawing on anti-Semites he encountered. Since Sartre knew no observant Jews, he does not include that perspective.

“He produced a philosophical speculation variously supported by anecdotes and personal observations,” Walzer writes. “The result, however, is a powerfully coherent argument that demonstrates how theoretical sophistication and practical ignorance can, sometimes, usefully combine.”

Among the topics scholars considered at the Vidal Sassoon International Center for the Study of Anti-Semitism conference — officially titled “Sartre’s Réflexions sur la Question Juive 70 Years After: Antisemitism, Race, and Gender” and held in an all-glass room at The Hebrew University’s Mandel Building with sweeping views of Jerusalem from all sides — was the effect of translation as well as the book’s reception around the world.

Professor David Feldman of Birkbeck University of London examined George Orwell’s response. Feldman opened by quoting Orwell’s note to his publisher after receiving galleys of the English translation: “I think Sartre is a bag of wind and I am going to give him a good boot.”

In his review, Orwell called the book “superficial” and “deeply misguided.” Feldman explained that “Orwell is incredulous at Sartre’s assertion that anti-Semitism is unknown among the working class.”

“For Sartre, the main issue was the anti-Semite. For Orwell, it’s anti-Semitism,” Feldman said. “Orwell believed the anti-Semite should not be distinguished as a type distinct from ourselves.”

Meanwhile, Sartre was a major figure for the Arab intelligentsia for two decades, from the end of World War II through June 1967; his existentialist philosophy fit in well with the idea of a post-colonial “New Arab” and therefore had great appeal, explained Professor Yoav Di-Capua of The University of Texas at Austin, who spoke “On the Late Arabic Translation of the Réflexions.”

There are photos of Sartre with Nasser, and one conference attendee even declared that he had such a photo on his laptop. But when Sartre supported Israel in the 1967 war, the Arab world was stunned and viewed this as a “betrayal,” Di-Capua said.

The Q&A offered interesting glimpses into how much influence Sartre’s book currently does — and does not have — around the globe. For example, Professor Fréderic Worms of the École Normale Supérieur in Paris mentioned that he had just completed translating the novelist Iris Murdoch’s book on Sartre into French — and that she never mentions ”Réflexions Sur la Question Juive.”

Yet France’s Ambassador to Israel was in attendance when Professor Eva Illouz of The Hebrew University, speaking Monday evening at Jerusalem’s Van Leer Institute, offered her response to Sartre and Walzer. The “Réflexions,” Illouz said, is “about the structure of thought that made possible the Vichy regime.”

Professor Illouz pointed out that Sartre uses racist as a noun, whereas today it is often used as an adjective, which can be meaningless. And during the same session, the Israeli novelist Michal Govrin described the anti-Semitism she has experienced in her literary career; she was spat on while reading the Hebrew newspaper Ma’ariv as a young woman in Paris, and more recently, was nearly removed from an international literary festival simply because she is Israeli.

Govrin also quoted Jacques Derrida on the subject when he visited Jerusalem in 1986. He was asked, “Professor, how do you assess the future of anti-Semitism?” and answered: “It has a future.”

As scholars repeatedly brought up the contemporary context — Feldman spoke of anti-Semitism in Britain’s Labour Party and Illouz mentioned Trump — the conference reflected deep concern about current anti-Semitism — and its future.