Is the Second Avenue Subway Saying Something About Us in This Mural?

Earlier this week, the MTA announced that four stations along the new 2nd Avenue Subway line in Manhattan (scheduled to open on January 1st), will be adorned with works of public art. It’s been a long time coming for the 2nd Avenue Subway line — plans were first announced in the late 1920’s. The stations at 96th, 86th, 72nd, and 63rd will showcase mosaic works by artists Sarah Sze, Chuck Close, Vik Muniz and Jean Shin, respectively. Each installation looks great, particularly Sarah Sze’s, which populates the subway walls with ghosts, both human and architectural, from the 1940‘s when the 2nd Avenue elevated train line was demolished. But I’d like to focus on Vik Muniz’s work, “Perfect Strangers.”

Vik Muniz is a Brazilian artist, perhaps most famous for his use of everyday objects in his art (his series “Painting With Chocolate,” for example, in which he recreates photographs and paintings with chocolate sauce). Much of Muniz’s work revolves around photography and the intersection between different types of media, so it’s no surprise that his mural for the 2nd Avenue Subway is based on a number of staged photographs he took of people he knows. Some are famous, like actor and designer Waris Ahluwalia, but most are, as the title suggests, perfect strangers. It is one such stranger in particular that I would like to discuss.

Although Mr. Muniz has a history of producing excellent art that is sensitive to its subject and circumstance (consider the series “Sugar Children” in which Mr. Muniz used sugar to make portraits of children whose parents work in the grueling sugarcane industry), there is one figure in “Perfect Strangers” that has unnerving parallels in anti-Semitic propaganda. We have tried, as yet unsuccessfully, to contact Mr. Muniz and the MTA about these parallels, but have not yet received a response. For the record, I do not think that Mr. Muniz intended these parallels, nor do I think Mr. Muniz is an anti-Semite (nor, for that matter, would I accuse the MTA) — I simply want to focus on the iconography of the image divorced from any idea of intent on the part of the creator.

The figure in question is the man on the far right of the image (unfortunately, there is no higher resolution picture available at the moment). The figure appears to be an Orthodox Jew (the beard and the kippah suggest as much) with what looks like heavily Semitic features. He is dressed in dark, subdued colors, with a darkly colored briefcase in his right hand and a brightly colored globe in his left (the contrast between the color of the globe and the rest of the image calls the globe to sharp, and immediate attention). On the one hand, perhaps the man is a grade school teacher, headed to work – a wholesome presence. On the other, the image carries with it the baggage of years of anti-Semitic propaganda. 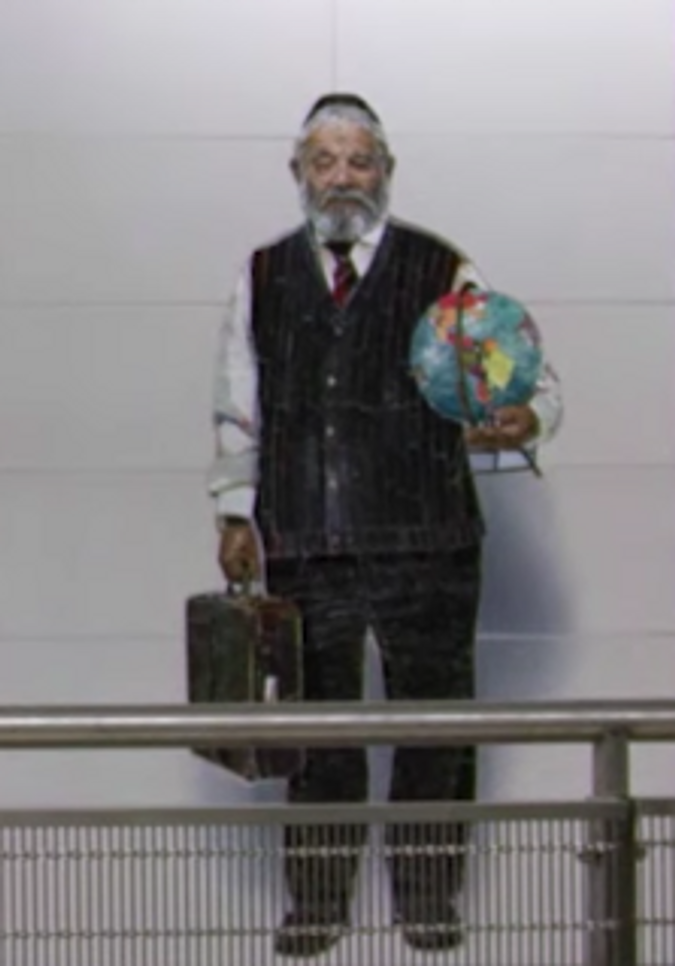 Notice something? The idea of a global Jewish conspiracy has been around for quite some time, but began to have a prominent place in anti-Semitic rhetoric around the turn of the 20th century with works like Wilhem Marr’s “Victory of Judaism over Germanism,” and Russian propaganda piece “The Protocols of the Elders of Zion.” (Anti-Semitism is unique in that it ascribes both inferiority and incredible powers to its target group.) The image of a Jew clutching the globe was used to invoke the fear of an imminent Jewish takeover, of the “cosmopolitan” (now a compliment, then an insult), globalist, landless people who would infiltrate, control and destroy – anti-Semites were both powerless to stop them, and the only thing preventing the takeover (anti-Semites aren’t exactly a rigorously consistent bunch).

It was an image used to great success in Nazi Germany and elsewhere in Europe. Countries that had recently suffered great losses of resources or pride, like Germany post-World War 1, or Russia after the Russo-Japanese War, often blamed the Jews (they control the world after all) for their losses – we know the results of these accusations all too well. The image, like anti-Semitism, continues to enjoy widespread popularity today. Consider these images from a German magazine and an Arabic publication (both images combine the global domination trope with the anti-Semitic zoomorphic trope — that is, portraying Jews as animals).

Once again, to reiterate, I do not believe that there was any malicious intent on the part of either Mr. Muniz or the MTA. Nor do I believe this image to be as pernicious as the overtly anti-Semitic pieces of propaganda discussed in this article. An image of a Jewish man holding a globe, however, placed without context into the public eye, is never just an image, and it cannot be divorced from the past – particularly in a time when hate crimes against Jews are on the rise. The iconography is too conspicuous and too malignant to ignore.

Is the Second Avenue Subway Saying Something About Us in This Mural?