Why ‘Farkakt’ Is Only One of Many Words That Describes 2016 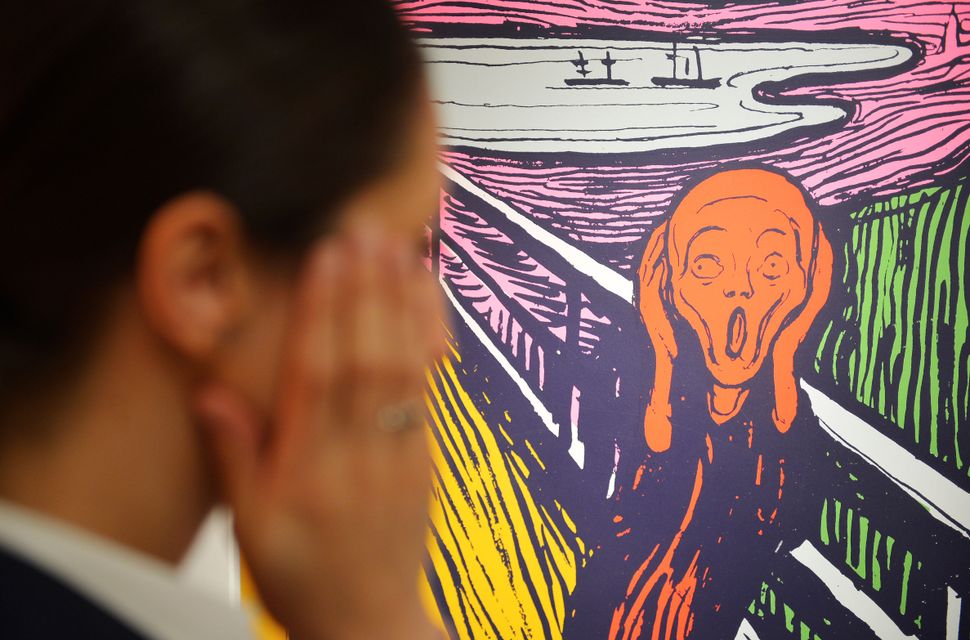 The Scream Image by Getty Images

Dictionary editors and cultural denizens are scrambling to come up with a single word to describe the craziness of 2016 — and some are turning to Yiddish for ideas.

After flirting with “fascism” as a possibility, Merriam-Webster went with “surreal,” which it defines as “marked by the intense irrational reality of a dream.” The word “surreal,” it turns out, dates from the 1930s.

Meanwhile, the Oxford Dictionary chose “post-truth,” which it defines as “relating to or denoting circumstances in which objective facts are less influential in shaping public opinion than appeals to emotion and personal belief.” The term “post-truth” saw a 2000% increase in lookups this year.

Not to be outdone, Dictionary.com went with “xenophobia” — noting that the word “finds its roots in two Greek words, xénos meaning “stranger, guest,” and phóbos meaning “fear, panic.” Cambridge Dictionary also went with the panic theme, going for “paranoid,” while Collins Dictionary went with “Brexit”.

Meanwhile, the term “gaslighting” got a big push from a widely shared article on the election in Teen Vogue, and Donald Trump’s typo — “unpresidented” — was also floated as a potential word of the year. Some Twitterati even mentioned “sad!” as the year’s most memorable word.

Not to be outdone, New York Daily News reporter Gersh Kuntzman made a passionate case for farkakt. “It’s Yiddish and it means we’re all f—ked,” he wrote, acknowledging that “over the centuries, the meaning has expanded to include such nuances as “vulgar,” “s—-ty,” and “too crazy for words.”

Across the pond, The Jewish Museum of London has been tweeting a Yiddish word of the week each Monday throughout 2016; its choice on December 12th seemed especially apt — shrek for “fear or terror.”

Some literary types chucked the lone-word idea and invoked Jewish writers of the past who also had to deal with surreal, post-truth, and xenophobic times to capture the mood as 2016 neared a close.

“I am going to bed at 7:45 with bourbon and Natalia Ginzburg bc I can,” tweeted Caroline Casey, managing director of Coffee House Press. The Italian Jewish writer’s famous essays about morality and survival in the aftermath of World War II are considered classics—and precious guides on making it through the most farkakt of times. And they may be even better when read with bourbon.

Why ‘Farkakt’ Is Only One of Many Words That Describes 2016