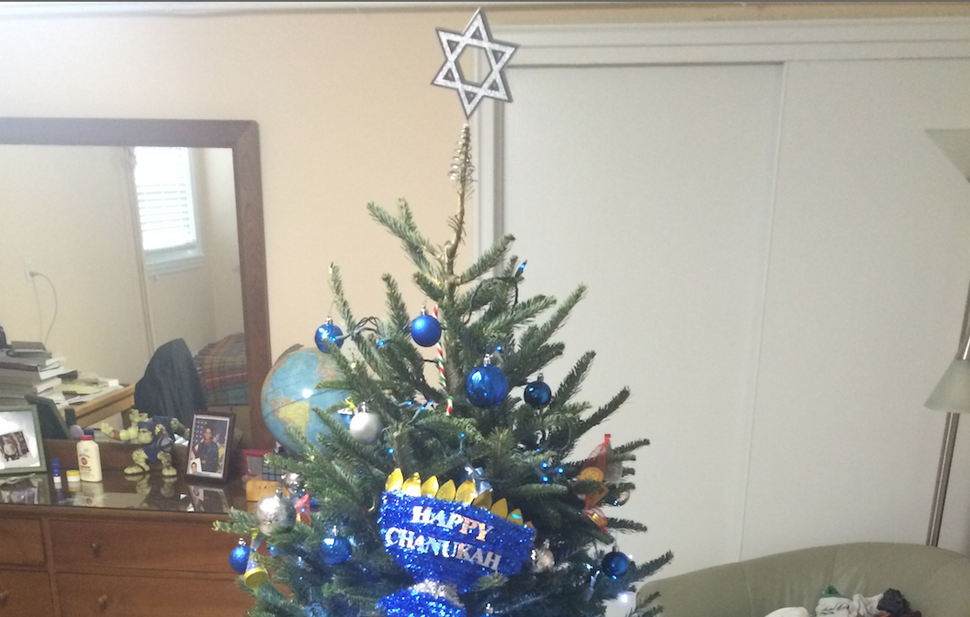 I never suffered the “December dilemma” as a child. Born to a lapsed Catholic mother and Reform Jewish father, I (badly) observed both Christmas and Hanukkah. We decorated a tree and lit the menorah. And, as Dad put on the Santa costume and mom fried the latkes, our family lived out its own loose and therapeutic monotheism.

As a teenager, I broke with that interfaith compact, “choosing” for Conservative Judaism though the movement isn’t sold on me. I’ve questioned how to observe the holidays since then. And I’ve hit on a new experiment this season, visiting the local Christmas mart and purchasing a “Hanukkah bush.”

Festooned with blue and white lights and ornaments, it’s much like the season’s normative shrubbery, but topped with a Star of David and bearing gelt. The whole family has gotten in on the action following some initial reluctance, helping this design-challenged author on decorations. Mom even dug into the closet for a secular tree skirt with snowmen on it.

Not everyone is that sanguine about the Hannukah bush. And to hear some tell it, this is the greatest menace to tradition since Antiochus profaned the temple. Community leaders were more than a century ago tut-tutting at their fellow Jews for their embrace of holiday greenery. “Why need we adopt the Christmas tree, ridiculously baptized the Hannukah bush?” wrote Hadassah founder Henrietta Szold. There’s even a children’s book called “There’s No Such Thing as a Hannukah Bush, Sandy Goldstein.”

But to me, the bush isn’t a sign of assimilation, a “neither Jew nor Gentile” copout, a helping of potato love with bacon and cheese spread. It’s a subversive act, claiming and reinterpreting an item historically representative of exclusion, and sometimes violence directed against us.

It’s easy to forget the terror that Christmas Eve spelled for our shtetl ancestors, who shuttered themselves indoors on that night. Christian holidays weren’t the most auspicious times to be Jewish. It meant getting marched to church against one’s will when Easter rolled around. And it could mean getting killed in a pogrom on Christmas.

It’s normal for the oppressed to plunder their persecutors’ signifiers. Gays shout “we’re here, we’re queer, get used to it.” Feminists revel in their “bitch” status. Blacks sometimes use the “n-word” as a term of endearment. The reappropriation strategy has even more resonance for Jews, given our customary relationship to Christianity.

I have a running gag with friends, a piece of anti-humor. “What is Christianity?” I ask. Answer: “A violent form of cultural appropriation toward Judaism.” It’s not funny, not entirely true and rips more on the campus left than Christians. But it gets at something real.

Christianity has mined Jewish tradition for its own ends. It’s taken the “Old Testament” and Passover, God’s covenant and the messianic idea. And that’s not to mention shofar-blowing, tallis-wearing, bar mitzvah-giving evangelicals. Christians have attempted to simultaneously possess our heritage and dispossess us from it.

Christians haven’t been so meek when the shoe’s on the other foot. Church authorities ordered the burning of the Talmud in the Middle Ages due to accusations that it contained negative passages about Christ. And mobs obliterated entire Jewish settlements on the false pretext that Jews stole and desecrated Communion wafers

We’ve transcended much of this history, and religious pluralism is now the norm. But there’s still a need to create a more inclusive December. Some might call that fighting a “war on Christmas.” Why not? There should be a “war on Christmas.” We should de-center Christianity as the “reason for the season” in a diverse America.

American Jews have been doing that for a while. Irving Berlin helped transform Christmas into a celebration of snow, not Jesus. Jewish comedians have created “Reuben, the Red-Nosed Reindeer” and “Hanukkah Harry.” The Hanukkah bush does something akin to this, both claiming and satirizing the Christmas tree.

There are greater problems than winter skirmishes in the culture war. It seems trifling to fret about holiday inclusiveness when the president-elect wants Mexicans to leave and Muslims to register. But in this deepest and darkest December, it’s time to find the light, wherever it is. And there are glimmers, no matter how faint, coming off the Hannukah bush in my bedroom.